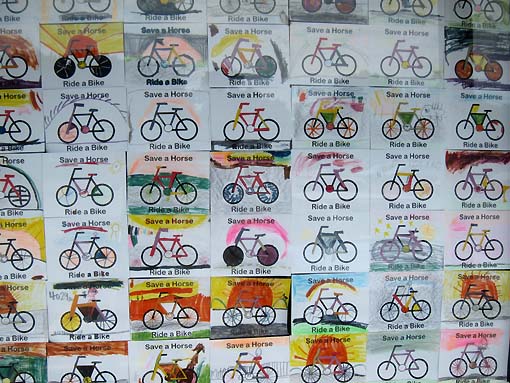 Oppressive heat last night.  Oppressive.  So hot you can’t sleep.  So hot even Nyquil doesn’t work.  So hot the sweat is pouring out of you evey second, your pillow is saturated and the air mattress has about a cup smeared all over its surface (the sleeping bag never came out of the sack).

I rose in the morning with about 1-1/2 hours sleep under my belt and a lovely sinus headache.   Mind you – I’m not complaining.  This is all part of the.  It’d be folly to expect to go the whole 3 months without someone getting a head cold.  Jack worked his way through one back in Washington the first week.  Now it’s my turn.

April Rain again for breakfast, then some exploring around town.  We tried several places looking for battery operated fans for the tents, a Dollar General, a Pamida, a Family Dollar, with no success.  Serious heat and humidity was again our partner today, so we tried to linger in each store, spent some time at McDonalds, Pizza Hut, etc.  A stagnant and soupy nap in the afternoon, but then we headed to the bowling alley.  We’d been playing with the idea of a bowling tournament for weeks now and today was the day.

Only Bill, Jack, and I got into the tourney.  After a practice game, it started to become apparent that we should have set this up as a handicap tournament based on Jack.  Bill and I gamely tried to challenge him several times, but then he’d pull out his A-game and smoke us.   He won all three tournament games, high game and high series. You could say that his A-game kicked our A.

Roger announced that he’d found small spray bottles at Family Dollar that we could use for misting in the tent.  Certainly better than nothing.  While I was in there buying one, however, my phone rang again and it was Bill.  He and Roger had found…drumroll…a Coleman tent fan at Pamida, with only 3 left.  I told him to hold one for me and I’d be over in 10 minutes, which involved a joyous and vigorous sprint to Pamida.  A tent fan!  Holy cow!  Runs on 4 D-cells, and is rated to run for 48 hours on low, 24 hours on high.  A little pricey at $30, but a small price to pay in this heat.  I almost could not believe the good fortune – way to go Bill and Roger!  Jack soon showed up as well and picked up the second to last one.

Evening eats at Pizza Hut, where I had the salad bar as a meal (you gotta love those 1000 island masterpieces).

Now I sit in my sweltering tent, BUT, alas, it feels like I am at the beach as the air swirls around in my tent.  My face is no longer wet, my pillow is still damp but drying out (then it will be just sour).  Cold symptoms are hanging with me and worsening, which is not good.  One of the big downsides of this is that I just can’t bring myself to drink any beer (a Ragbrai staple).

Sleep will come easy tonight.  What that you say?  Yes, I guess I am a happy camper.