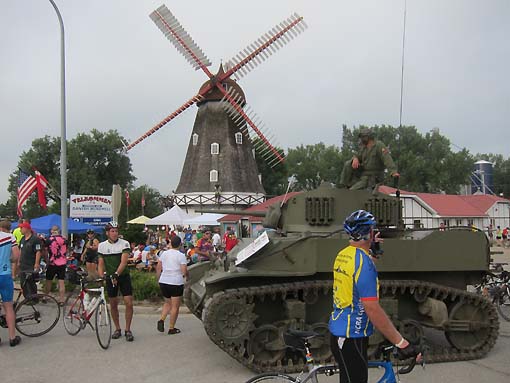 Without a word of planning, Jack found me this morning as I was dragging my bag to the Ragbrai truck.  It seems that simultaneous morning routines works whether we are camping next to each other or not.

Fifteen miles to our first stop in Elk Horn IA.  It is a neat Danish community with a full sized windmill.  There was a half size tank there too – I’m not sure what that was about.   We waited a long time in the line for the Elk Horn Fire Department all-you-can-eat pancakes deal, and so watched plenty of the Ragbrai river of bicyclists, which is as swollen as the Missouri River.  The pancakes were not bad and I like to support the FD.  (Rater’s note: about a 3.5 on the scale – small and tasteless, unevenly cooked, blah syrup).

Only 3 more miles to another town Kimbalton IA.  Jack and I listened to a so-so garage band which was a lot of fun for a while, watching the bike parade.  Jack and I met up again at a shady tree on the roadside, and leaned back for two slices of watermelon and a large Beekman’s vanilla/chocolate cup, then just about fell asleewp for ½ hour.

Further down the road a farm had a pen of 1-day old oinkers, so I pulled over to investigate.  This next picture is a dedication to Jack’s and my new biker gang: The Wild Piglets.

In the town of Manning IA I had a great chicken sandwich and talked for at least a ½ hour to a guy who’d lived 4 years on St Croix and racked up may scuba dives.  He knew the owners of N2 The Blue Dive shop and we discussed many dives sites we both been to (Cane Garden Bay, North Star, etc.)  A lot of fun – it got us both thinking about diving again.

A little bit past Manning I went in to the German Hausbarn, a really wonderful German bar and beer hall.  Pretty soon I had a Beck’s Dark in my hand and was seated at a table with a hundred drunk cyclists, listening to a great tuba-accordian-drummer polka band.  They were really good, especially the tuba player, and played Beer Barrel Polka and a bunch of other stuff I didn’t know.  Cyclists were jumping around whether they knew how to polka dance or not.

Then off to Templeton IA.  I was looking forward to this because there is a rye whiskey distillery here and the paper said they’d be offering free samples.  But ir required a $5 tour so Idecided not to do it.  A little past town there was this steel tank filled with water and cans of beer.  A guy in front was calling out “Beer bobbing”  “Try your luck”  This one cyclist starts asking questions, how does this work, etc. and the guy (in the orange shirt) is a riot.  He just keep saying, “You gotta give a dollar first.”  “But what do I do?” “Ya gotta give a dollar first.”

He finally gives him the dollar and is told he must “bob” for one of the beer cans, no hands.  So here he goes…

Unfortunately, none of the beer cans were upright, so he couldn’t hook one on his teeth by the pull tab.  He finally puckers his lips around the bottom of one and sucks it up and out.  Everyone cheers.  The guy then hands him a little ticket and tells him he must ride 6 blocks down the road to pick up a prize beer.    The cyclist is complaining about how this feels like a big bait-and-switch, and the water was half mucus anyway.  What a riot.

Through a few more towns and into Carroll IA, our stop for the night. I timed it just right, arriving at 6PM.  No need to get here any earlier.  Jack and Bill found me after I Set up my tent (they just looked for the green worm), and we all (with Jesse) went out for Chinese.  Afterwards, I went over to the bandstand for a while and listened but wasn’t too impressed and so left to compose this nonsense.  I’m still listening as I type – their PA is pretty loud.  They’re playing “Friends in Low Places” right now. Sort of badly.

Day 2 lived up to all expectations.  About 65 miles today with lots of hills, almost 5000 feet of climbing, but nothing too taxing.  This week of Ragbrai really is the luxury segment of our tour.