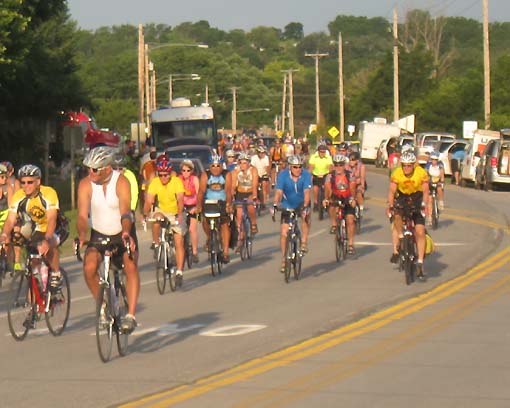 The first day of Ragbrai.  I had this same problem trying to write about it last year.  How does one describe it?  You can’t – each participant’s adventure is a different one.

My cold felt better this morning but my joints were achy – what can you do?  Jack and I were out of tents relatively early in order to get our gear reorganized so the Ragbrai trucks could take it as a single piece, instead of 4 panniers (accomplished through duffel bags brought by Phil).  I decided to carry my netbook and by now-beloved (and possibly fragile) tent fan with me in one pannier, which actually made my packing even easier.  It was very straightforward to load them onto the Ragbrai truck – sweet.

Then out onto the road, and into the Amazon River of cyclists that is Ragbrai.  All makes and models of bikes, riders, and apparel.   All levels of fitness, although most riders do at least some training.  Strange calling all the time, “Rider on!”  “On your left!” (which is a euphemism for “Get out of my way!” “Car up!” and the ever popular “Rumbles!” (a warning about rumble strips).

We passed through the small Iowan towns of Silver City, Carson, Griswold, Lewis, and Atlantic, all in about 60 miles of riding.  There is a fair amount of climbing involved, more than 4,000 feet, but all in short 200 and 300 foot hills, with nothing very steep.

Jack and I stopped in Silver City for breakfast from none other than “Mr. Pancake.”  Despite being duly impressed at the efficiency of their ability to turn out hundreds of pancakes per minute, I rate them about 4 on the Kimmie scale.  Good textures and decent size, but no flavor (lacks vanilla or cinnamon or salt or buttermilk or anything) and low score on their syrup (brown colored sugar water).

In Carson Jack and I had decided to eat lunch, but I think I arrived first and so waited by the roadside for Jack to pass.  After ½ hour I knew that either Jack had arrived first or that I’d missed seeing him, and finally thought, heck, this is Ragbrai.  We both know it’s impossible to stay with someone unless your attached with a rope.  I rolled into town, picked up a barbecue sandwich lunch, two Sprites, and a Coke, and then found Jesse, so we sat on the sidewalk watching the parade for a while.

Just after Carson, I pulled up from Jesse when I passed a sign announcing “Frozen Slushies.”  These turned out to be wine-based margaritas with intensely good flavor (so intense I needed water as a side).  As I worked on mine, a band worked on setting up gear and doing a sound check, so pretty soon I got interested in them.  It turns out they sounded pretty good and had a few catchy original songs.  Unfortunately, it was not easy for riders to see this opening in the corn without turning their heads backwards, and as a result, only 3 cyclists sat listening to the band, and two of them were passed out on haybales.  Pretty soon even those two left, so I made a bigger deal out of my applause, ordered another margarita, and they called out that they were playing for their “Army of One.”  The band’s name was something like Scoletta Eceterra – something like that.  I need to look them up on I-Tunes.

Rode with Roger for a while, who was happily drunk from multiple beers.  Watched a Glee-like group sing on a stage in Lewis.  Ramped up the riding pace with a girl from Ames, up around 18 mph.  Darlene finally saw me and called out, so I pulled over and sat with her and a couple friends under a tree.  This gave me a chance to eat a slice of rhubarb pie I was saving for tent food later tonight.

In to Atlantic, our destination town for the night.  Grabbing my duffel from the Ragbrai truck was super easy – I spotted it in about 8 seconds.  Then finding a tent site was almost just as easy – I found one within 2 minutes.  I called Jack but got no answer, just about the time I heard him call out my name.  He and Jesse were set up in the outfield of a ballfield, so we soon headed out to explore and a Mexican dinner.  Relatively fast service, OK Meixcan food, and margaritas – not too bad in a small town swamped with 20,000 cyclists.  We figured we’d come out pretty good.

So here I sit in my green pod again.  We are tenting on a rocky stream bank that is encircled with yellow tape that says, “Caution – Do Not Enter” on it.  If something happens to me, it will happen to the two humdred other tenters beside me.

After day 1, Ragbrai is great.  It is giving us a wonderful break.  Greatly reduced bike weight, drafting of hundreds of cyclists, six or seven built-in stops with food and water (or any other beverage).  Having done Ragbrai last year, I am falling into the party-rhythm of it all much easier this year.   Bring on Day 2.