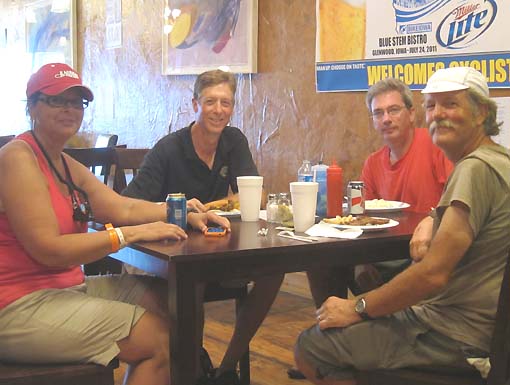 Good sleep last night.  I woke up several times and caught glimpses of a starry sky, then the next time a cloudy one.  Drops fell before dawn, but not enough to cool it down much.  But the fan!  The fan!  It works great.  I’m thinking that on the 1st morning after everyone rides, I’m going to be able to sell this thing for $300.  No sale.

Breakfast this morning at Tim and Jill’s Family Restaurant.  This is supposedly the best place in town for breakfast.  The place was just about full but not overflowing, and yet they acted like they were totally overwhelmed.  Which was perfectly OK with us.  That meant we could linger for a couple of hours in the air conditioning and slow play the breakfast.  We talked at length with a super friendly fellow who lived in town, a retired guy who also used to serve the fire department.  He had many stories about the town and his life, but, as Seinfeld would have said, this guy was a “low talker.”  Over the din of the restaurant, I could just barely understand the tack of his stories.  It was like taking a hearing test at the audiologist.

Some chores were in order.  Jack and I both decided to send a parcel of cold-weather clothes home, and we hit the tents to organize this. We only had about 45 minutes before the post office closed (since it’s Saturday).  Both my bicycle shorts were wearing out badly but I was a little hesitant to mail them home without making sure I could buy some here at the bike expo, so I visited there first to investigate.  Found some Pearl Izumi Pro shorts that seemed perfect, and so had them hold 2 pairs for me while I mailed everything.

As I rode to the post office, I passed the Pork Belly tent array.  Phil!  All I could do was give a big wave and tell him I’d be back in a few minutes.  I finally got back to his place – it was great to see him and we caught up a little bit.  Paul was not yet in town, and Lisa couldn’t make it this year.

Off to the expo with Phil and Jack.  Jack and I both scored new cycling shorts and a Ragbrai XXXIX jersey, among other things.  I then got another chore done – got my hair cut at a local salon.  After 53 days on the road, mostly in tents, do I need to tell how great it felt to have someone wash my hair for me?    I then caught up with Phil and Jack having lunch with Darlene (I have cycled many times with Darlene on J&P rides and on Ragbrai last year).

My cold symptoms really started to hit me hard, with achy joints too, so I headed back to the tent and did an impression of taking a nap.  It became one of those swimming affairs again and I finally found a place outside my tent and just crashed face down on the grass, sweating without end into my Shamwow, water bottle at my side, coughing away.  The massive outpouring actually seemed to do me good, and I soon felt good enough to shop the expo again, looking for a street shirt.  All I could find are cotton tees, however – I may buy one later.

Two cool things happened in the late afternoon.  The first is that a B2 bomber did a flyover to celebrate Ragbrai.  If you haven’t seen one of these things flying, they are surreal.  They look very alien, a huge blade of metal steering through the air.  Some minutes after the B2, a long siren sounded.  It was only 5:30PM, and so wasn’t the normal 6PM toot they give.  A severe front was coming through.  One verbal advisary suggested to tear down tents and head inside the gymnasium, which many obeyed in a scurry.  However, most of the campers, including us, just layed down our bikes, secured our tents, and stretched out on the grass to watch the skies.  Dark clouds came screaming overhead, low hanging formations that had us looking for funnels, some thunder and lightening, a little rain, but not much.    Phil and Paul showed up in here but didn’t stay long because they had to get back to secure their tents.

There was enough rain to drive us into the tents, where Jack and I blogged for a while, but then got out again on the bikes and headed into town.  Several of beer gardens were having bands tonight so we needed to check them out.  None of them was too sensational, but one had a swinging gal lead singer who had a lot of good stage moves – it was a lot of fun for an hour.