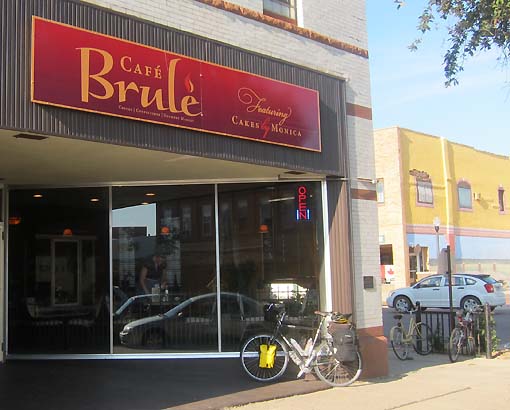 Another pancake start to the morning, this time at Café Brule on Main Street in Vermillion SD.   This is a rather upscale “gourmet” sort of café geared to the college set, one of the most civilized eateries we’ve been in since maybe that Wallwebbers soup place way back in Okanogan WA.  The pancakes were tasty but not high scoring on the Kimmie scale due to a tough texture, and smallish size.

It’s getting to be that I hardly want to start my day without pancakes.  I’m hoping when we get to the Ohio Valley area, you know, maybe into a state like Indiana for example, that we might run into someone who can blow the doors off this tour pancake rating.

Gary took off early this morning on a straight route into Sioux City, but the rest of us decided to head due south out of Vermillion and explore a corner of Nebraska off the bicycling maps.  The route took us over the Missouri River, then east on NE12 through the towns of Newcastle NE, Ponca NE, and Jackson NE.  In each town we stopped to grab a big cold drink, and the reason was simple enough.  At each stop the conversation was always the same.  Everyone was talking about the heat.  It was front page news throughout the area.   Seems in each store, some guy would just be finishing his sentence about how hot it was, and then he’d nod in our direction and add, “…unless you’re doing what these guys are doing.”   You mean, “numbskulls,” right?

The truth is that it didn’t really feel too bad while we were moving, since the breezes we self-generated were also cooling to some extent.  But without question, with the heat index to a reported 115F, we had to really be careful about periodically getting cool and staying hydrated.

As we approached Sioux City we called strongman Bill for a scouting report.  He and Gary were at a McDonalds in South Sioux City and were heading up into town to check out a YMCA and Walmart.   Jack and I continued due east instead, recrossing the Missouri River.  This should have produced a “Welcome to Iowa” sign but we didn’t see one.  Instead, we soon found ourselves staring at a big old interstate interchange.  We spied some tall McDonalds arches a mile south and so started onto the entrance ramp south onto I-29.  Jack rolled ahead as my phone rang, and so I stopped on the ramp shoulder to answer it.   Gary gave me some further instructions on where they were, and told us they’d found a partially flooded and closed campsite infested with mosquitoes they thought might work.  By the time I eventually reached Jack he was already a mile south and at the exit ramp, starting to wonder if I’d been taken out by a truck or something.

We entered a Wendy’s to regroup.  I wanted a vanilla milkshake and indeed they offered something called a “frosty shake” in vanilla.  But, like the pancakes on tour, I’m starting to take note of quality.  In particular, I like my shakes slightly on the icy side, with some liquid milk co-existing with the beaten ice cream.  This Wendy’s thing, however, was glop.  Plasticky creamy over-sweet glop with too much vanilla flavoring.  And the vanilla flavoring was way off, not good at all.  I even strolled back up to the counter and asked the guy who made it, “Have you ever tried one of these?” and then threw the whole thing away.

The swampy buggy sweltering camp idea easily lost out to a nearby Super 8.  Splitting a $53 room made the decision even easier, so we called up Bill and soon he and Gary rode down and grabbed a room here, too.  For the evening, the four of us headed out for a tasty Mexican dinner and shared a good hour of laughs to boot.  Incidentally, it was loudly unanimous that riding on the interstate sucks.  Too loud, too many vehicles, too much debris, to be avoided.

I heard from Roger – he is back in Omaha, planning to put together a bike tomorrow and set off to find us.  I’m already so impressed with what that guy can do, and this will be further icing on the cake.  I’m anxious to see what kind of machine he can “manufacture” in less than a day.

We also heard, from his blog, that Jesse likely experienced some heat-related dizziness and is planning to rest for a few days in Missouri Valley, IA.   We sure hope he is OK.  It was a strong reminder for all of us to watch the heat, exertion level, hydration, and electrolytes.

52 miles today.  State number 6 (NE) and number 7 (IA) all in one day, although it was a little unsatisfying not to get a “Welcome to IA” photo.  We’ll have to try to find such a sign as we proceed south parallel to the state line.