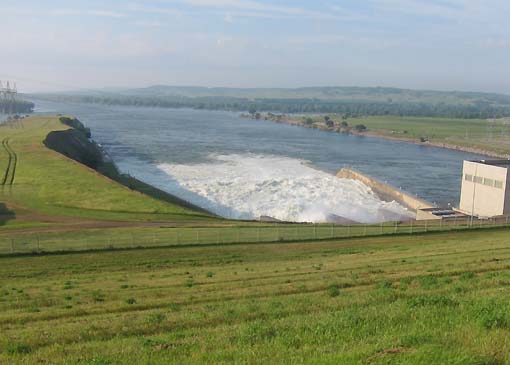 Very good camping last night at Randall Creek Campground.  Breakfast this morning at the Pickstown Bait and Tackle store, eggs and pancakes.  Gary and Bill confirmed their decision to ride to Yankton today.

Then a climb out of the river valley heading east on SD46.  We encountered basically two problems today.  The constant SE wind, almost diectly in our faces, was certainly the first.  The second was the 95F temperatures with high humidity.  As we rode this morning the wind speed continued to pick up, and pretty soon I stopped cycling and started “sidewalk riding,” you know, just poking at the pedals and moving my bicycle forward with little interest in it.  Headwinds can do that to you.  The panniers create a lot of wind resistance, but I am also convinced that my aerodynamics are particularly bad on this bicycle since the frame is too small (so I sit too upright).  Feels like someone poured glue into my bearings.

No worries.  We reached the turnoff south down CR21 (BIA29) to Marty, and stopped to look at our maps.  It’s a really good thing we did, because a pickup driver very soon stopped and told us the road was flooded along the river and we shouldn’t try it.  If we had, there was virtually no outlet – we’d have had to retrace miles back to the highway.

Instead, we continued down SD46 and found Gary at a store in Wagner (Bill had long since disappeared up the road).  We loosely grouped up for a continued ride down SD50 to Avon SD, where Jack and I lingered buying snack items.  The day was really growing sweltering and we discussed options, and finally decided to explore camping options in the next town, Tyndall.

Another 10 miles to Tyndall SD, seemingly long miles to me into a cross/headwind, and finally into a DQ.  Gary regrouped with us and decided to camp with us here, too, at the Tyndall city park.

After setting up, Jack and I joined the cheering family members at several T-ball games.  Tiny little players with pretty good arms.  It was a lot of fun to watch – I bet Tyndall is one of those places where parents return to raise their kids.  A quiet peaceful place where people look out for each other. An All-American small town.

About 47 miles today.  We face a short ride to Yankton tomorrow, but if the incessant headwinds continue, even that ride may be trying.  Here’s hoping for a change.  I do know the forecast for the next few days is for ever rising temperatures, but the winds could do anything.