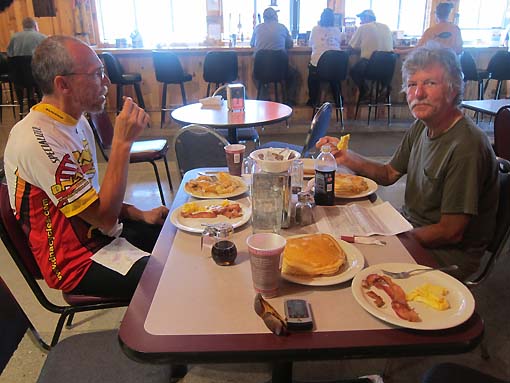 Up this morning with a mind that, if winds were the same, we’d stay here for another day to recuperate and wait it out.  The rangers told us that we might not be able to stay since there was a fishing tournament going on, but I’m not sure what they are smoking, really.  The park has acres and acres of open grounds, and yet they tell us they are full and can’t allow our tiny one-person tents.  Government workers….

We hit the bait shop for breakfast.  Our pancakes were given a second place for size, but only a 5.5 on the Kimmie-scale, having little flavor and being undercooked.  A look at the fishing weather forecast told us exactly what we wanted to hear.  Winds today about 10 mph, from the NORTH!  Yes!

With a long ride planned today with no towns, we all stocked up on extra water.  In addition to bottles, Jack filled his Camelbak and I grabbed 2 extra liters.

While we filled our bottles at the camp faucet, a couple of kids on bikes came over and started asking all sorts of questions about my bike and our trip.  They were perplexed by my handlebars, asking why they were all bent.  They’d never heard of the Pacific Ocean before.  I let one try to lift my bike (no way) and then he tried to lift only the front wheel (barely).  A third kid soon joined us, boasting HE could lift the front wheel and did so.  He then asked if he could sit in the seat, so I held the frame while he scaled his way up to the seat, like a rider climbing up a tall horse.  He looked just like that, too, because once on the seat his legs just dangled with nowhere to go.

A few more kids on bikes showed up, and the boys challenged me to a race.  I told them there was no way I wouldn’t completely smoke them all, which they bravely refused to accept.  Pretty soon, Jack joined us and we had a regular starting line.  When I inched forward in order to get a decent photo angle, they all inched forward the same amount, not wanting me to get a head start. Cracked me up.

The outcome was predictable.  A couple of boys got out to fast starts, and with my 90+ lbs of bike I was slow out of the chutes.  After about 100 yards I was bearing down fast, and they were yelling out, “Go! Go!  Here he comes!” I blew quickly by them all before we reached the first Yield sign, and the race was officially over.  Except for Jack on the backside spurring on the progress of the slower contestants.

Now fresh off a night’s sleep we knew what to expect, so the big hills out of the park were at least mangeable, although still a slow grind.   All along the way I was fighting my rear fender, which continually rubbed against my tire.  Zzzt-zzzt-zzzt.  I’d adjust it, but it would still rub.  I must have stopped six times, tweaking it into place, and yet still it rubbed.  I wondered if it had been rubbing all day yesterday and I just couldn’t hear it in the wind.

I finally bit the bullet, stopped, pulled the panniers etc., inverted the bike, removed the rear wheel, and unmounted the fender.  I then ceremoniously folded it in half and then in half again, stomping on and destroying it.  Sure, I’d done 2000 miles with it, but the clearance was just too finicky with my 40 mm tires.  The rear one provides less function anyway, except to shield my trunk from rain spray.

Now free spinning, up and up that last 9% grade, then a few more miles back out onto US212 heading west.  It was already hot and steamy so I stopped at “Gary’s” Whitlock Bay RV park for a cold 1.5 liter Gatorade, and left a phone message for Jack to proceed without me, explaining the fender delay.

South again onto SD1804, the riding became very peaceful.  Flat and fairly uninteresting terrain, fields of wheat and corn as far as you can see.  Mild (blessed) tailwinds from the north.  Compared to yesterday, the 14-16 mph speed felt like flying.  The joy was back.  With only the 90 degree heat and humidity to deal with.

I went probably 25 miles before seeing Jack, who was waiting for me at a right angle turn in the road.  Gary had called to inform us that he’d decided to take some dirt farm roads directly to Pierre, shaving perhaps 8 or 9 miles off the planned route.  We discussed it but decided to stay on pavement.  The mild winds continued to favor us.  And neither of us needed an “adventure” after yesterday.

Jack had already eaten lunch, but we decided to look for some shade so I could do the same.  Another 3 miles brought us to a small stand of cottonwoods, surrounded by waist high grasses.   I grabbed my lunch (a fruit pie and my water) and waded through the grasses, carefully looking for snakes.  I sat down at the edge of a corn field, and as Jack reached the same spot we realized that we were going to be attacked by mosquitos here (which Jack had already surmised before arrival).  We ended instead by the roadside, me eating my pie, being attacked by mosquitos nevertheless since we had stirred them all up.

The winds calmed to near zero, which made the riding quite hot.  At least we both had plenty of water today.  I figured that within 10 miles of the downtown we’d at least find a place for a cold soda or something, but there was absolutely nothing.  I stopped for a rest at one spot and a lady stopped in a car to ask if I needed water.  I almost asked her if she could give me bath.

We passed the Lake Oahe Dam, a huge earthern structure.  It was hard to believe that this single dam creates the humongous Lake Oahe that stretches several hundred miles up into North Dakota.

Into Pierre, we stopped for a cold drink and decided that a rest day here was certainly in order, and at a motel.  With cold beverages.  And pizza.  We heard from Gary again – the Day’s Inn was full except for single rooms at $65/night.    Bill had linked up with Roger again and they were heading south out of town to national grassland area (free tenting).  Gary was staying for a night at the Day’s Inn and then moving on, probably also in pursuit of free tenting.

Jack and I decided to try to find a double room, and checked the nearby Budget Host Inn.  No doubles.  Then downtown to America’s Best Value Inn.  No doubles – all booked.  A friendly passerby directed us (errantly) to the Capitol Inn, and as we rolled around we spied the King’s Inn.  Ah –  a double available for $72 – only $36 each.  Perfect.  Wi-fi, continental breakfast, nice clean place, and very best of all, no smoking – in the entire building.   [I’ve grown a little tired of requesting a no-smoking room and really getting an ex-smoking room.]

The room has made me very happy.  We booked two nights, racked out on the beds, talked to family, called out for pizza, watched Wall Street Money Never Sleeps on HBO (replay for us both) and well, the rest is blurry.

70 miles today.  The last four days from Bismarck ND to Pierre SD were the longest and toughest planned prior to Ragbrai, and throw in the brutal winds and hills yesterday as a bonus.  Only a few more days are planned in that 70 mile range, with most days much shorter.  I hope we are able to link back up with our compadres.  We’ve made big strides toward the Ragbrai start, now only 476 miles away and 10 riding days to do it (plus 3 additional rest/margin days in Glenwood IA if necessary – I hope they have a bowling alley or movie theater).

By the way, I heard from Jesse.  He’s had recurring wheel problems and was in Aberdeen SD with Frank this morning.  Yesterday, Jesse decided to rent a car and drive to Sioux Falls to buy a replacement wheel, then drive back to Aberdeen in order to continue the trek.  Seems like a smart and expedient way to get the repair done – I hope they were rolling today.