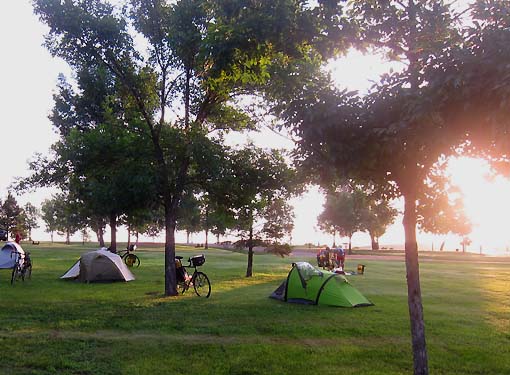 A long climb up a hill out of Indian Creek Rec Area started out our day.  And I might add this was all without pancakes.  Little did we know…

We parted ways with Roger at the junction of SD1804 (the Lewis and Clark Route we’re following) and US83.   Roger decided to take a straighter, possibly less hilly, and possibly better paved road today, meeting up with us about midway through.

This idea immediately proved out correct, because we were presented with a series of steep hills in the 6 to 8% range that wound around rangelands and river bluffs.   Winds this morning came swiftly from the ESE.  Our direction?  South and east.  We probably climbed five of seven good hills before encountering a real whopper, a long 7-8% grade east into the teeth of the wind.   For the last hundred feet of climbing I resorted to slaloming back and forth across both lanes.

As we rode, and now about 6 days after the fact, I finally got the joke, which cracked me up.  From Jack’s blog.  Cows like it on top.

The road then ran out, turning to gravel.  The maps indicated this, so it was no surprise.   Our fat touring tires perform fairly well on this stuff, but it requires a lot more attention to avoid the soft stuff.  Between the winds howling in our ears and the fixation on road surface, the riding got to be a real chore.

After 9.5 miles of gravel, we finally (finally) reached pavement again, and soon rolled into the small town of Akaska SD.  A very friendly guy on an ATV stopped and told us that if were in Akaska, we must be lost.   He directed us to food at a bait shop, and wherever there is food in these small towns we seem to encounter members of our riding group.  Bill had already arrived and left, but Gary was still lingering.  He called today’s riding the toughest he’d done so far and we agreed.  Little did we know…

While we ate, we watched the trees outside for signs that the winds were letting up.  Well, the winds indeed did change.  They got even stronger.  We commented that if Roger were not out on the road planning to meet up with us further south, we’d probably camp right here for the night.  Instead, we rolled out of Akaska about 3 miles to US83 fighting more of a crosswind.  Why a crosswind? Because the wind direction was changing too, now seething out of the south.

At US83 our route turned due south (naturally).   For the next 2 miles we fought our way like salmon grappling upstream.  The strong winds were our main adversary of course, but the gusting is what made the riding almost impossible.  Even in headwinds, one can find a steady cadence with the right gear, but with these gusts, every 5 or 7 seconds or so it felt like someone grabbed the back of my jersey and pulled hard.

I soon surrendered.  From my  scuba diving, I know that to fight a current is utterly futile.   The only thing I refused to surrender was my heading (south).  So I ended up gearing down not just for the wind, but also for the gusts.  This put me in the granny chainring, and only one or two gears off my largest cog.  Almost a crazy set up.  It allowed me a steady rapid cadence with plenty of power that even the gusts could not alter, albeit with a maximum speed around 7 mph.  And it also afforded me the ability to relax and try to find anything to enjoy, instead of fighting every minute.

We plowed along for a half hour, trying to cope.  Finally a sign appeared.  “US 212 – 17 miles”  Seventeen more miles!  Almost 3 more hours directly into this wind.  Unbelievable.

Riding in such a low gear is also harder on your posterior (Jack points out that you’re putting less weight on the pedals and more on the seat).  So I began a regimen to stop every ½ mile or so, get off the seat, reset, and try to find things to enjoy.  I also used the stops to regularly drink some water, because in these endless hot winds we were losing it like crazy.

Jack faired better than me in these conditions, and was soon well ahead.  He took a different approach and actually geared up a little bit.  Every once in a while, though, he would generously stop and regroup with me.

After 8 miles or so, we decided to try some drafting, and together we picked it up to 10-11 mph.   Despite the success of this for a few miles, I enjoyed it much less, because for me it was simply too much work.  Fine for a Saturday morning workout maybe, but the pulls wore me down further and even the drafting took a lot of attention.  I eventually fell off the back of Jack (he never heard a thing in the winds) and went back to the good ol’ 7 mph.

Mind over matter for hours.  You look at the grasses, you look at the white stripe, then grasses, then white stripe…  You can’t hear yourself think due to the wind noise, and there wasn’t much scenery to see here anyway.    I stopped looking at the odometer altogether – too discouraging.  To cut my cross section I started putting my head down onto my handlebar bag.  All the way down, so all I could see was my front wheel and the white stripe.  I’d take a look ahead, then put my head down and count to 15, then take another quick look, count to 15, and so forth.

Like watching paint dry, we covered ground.  Eventually, seemingly in slow motion, the sign for US212 came into view.  Now utterly drained, we turned due west.  The winds became a big crosswind, helping us a tiny bit, by maybe 3 or 5 degrees.   Unfortunately, as we rolled along, both Jack and I ran out of water, gulping the last swigs from our three bottles.

The next 10 miles had us both growing critically dry.  We stopped several times along the way and drooped onto our handlebars trying to maintain some coherency, then we’d start rolling again.  Our effort eventually brought us to the intersection of US212 and SD1804.  My phone rang, and it was Gary.  He told me that Bill had gone on to our intended campsite at West Whitlock Rec Area, but that it had involved lots of hill climbing.  Instead, he’d taken a place at an RV park.  He instructed me to take SD1804 for exactly 2 miles and he’d be out on the street to wave us in.  Sounded great.

We started up SD1804, which thankfully headed north, with the winds.  After 1.5 miles, we stopped and gazed ahead at wide open spaces that did not appear to host an RV park.  We did not want to proceed any further downwind on an error, so Jack was successful in reaching Gary again (my phone wouldn’t connect).  After further discussions, it was confirmed that we were OK and to proceed another ½ mile.  I zipped down a hill and was about 1/3 mile away when I heard Jack call out loudly behind me.  He was waving at me from the top of the hill, so I turned the bike around and worked it back up, into the wind (only later thinking I should have tried to call him on the phone).

Gary had called back and redirected us, telling us we should not have turned up SD1804.  Faced with a 2 mile slog back into the headwind, or a wind-assisted roll into West Whitlock Rec Area, we decided on the latter.  Little did we know…

After 2 moderate hill climbs, we came to nice yellow diamond.  Truck-on-a-triangle 9% (down).  Wow.  Oh well, we’ll have to wage that battle tomorrow.  Down down we zipped, then worked back up the other side.  We vectored west, facing yet another healthy hill, so as we ground up I’m figuring, this must be the last big hill.  We’ll get to the top and be gazing down on the river and the campsite, right?

The top brought us a view, all right…of another sizeable hill, also around 6-8% grade.   Down we went, then chugged slowly up again.  After all the expenditures today, these hills were draining what little we had left.  More importantly, our thirst was becoming truly medical.

Down another, then up another, only to view an even bigger hill ahead.  At the apex of the fourth hill, I actually cried aloud, “Mother fucker!” (sorry, Mom) because I couldn’t believe the sight of yet another hill.   Six grinding hills in all, then one final climb and a turn south (oh yeah, into the wind) towards the rec area.  Jack reached the gate first, and without ceremony stated, “Water.  I need water,” like some desert nomad.   He was swiftly directed to a nearby spigot.

I turned off earlier into a bait shop and found cold Gatorade, chugging a 1.5 liter bottle in 20 seconds.  We retired to the coolness of the bait shop bar and sat drinking water, Gatorade, Pepsi, and beer, and eventually ordered a little something from the menu before the kitchen closed.   We were both so dehydrated that food did not sound very appealing.  Still, our little fried mushrooms tasted pretty good, and I even enjoyed something called a “brat burger” (actually a patty of brat-seasoned meat) and catsup.

Entering West Whitlock Rec Area, we found Bill at a tentsite and set up beside him, and he came out to chat.   As a veteran and very strong rider, Bill said this was the toughest cycling day he’d ever experienced, and expressed some doubt that anyone else would even make it here.   Having done so, and having endured it all, both Jack and I were pretty pleased that even Bill had found these conditions a test.   All of us had certainly risen up to a challenge today.

We stayed up and chatted mindlessly for another hour, watching a young buck bound behind our campsite.  There is something about an “over” workout that messes up your ability to sleep, and the dehydration did not help.  Bill was having a hard time sleeping, and I spent at least 45 minutes in my tent tossing and turning, although Jack had no such problem.

76 brutal miles today. Incidentally, the weather record showed 15-25 mph sustained southerly winds this afternoon, with gusts to 40 mph.  We’d averaged only 8.1 mph for almost 9 and a half hours.   Even Bill had taken over 7 hours of riding.   To put this into some perspective for you other cyclists, I figure if we’d have been riding road bikes this would have been equivalent to 150 miles and 10,000 feet of climbing.