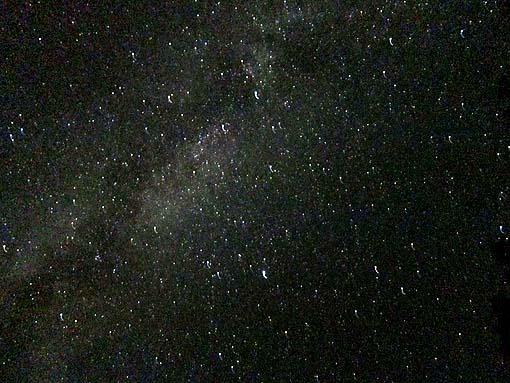 This morning, around 3AM, I awoke and gazed up at the best stars yet of the trip.  I grabbed my camera and started playing around with long exposure times, hanging out of the tent, and even got one to sort-of turn out, despite a jostle of the camera at the beginning of the exposure.  Just fantastic in person.

Jack and I breakfasted in camp and hit the road – another long ride planned today.  The route included plenty of hills and stunning country, and the terrain turned into one of “badlands,” consisting of table top mesas and broad valleys of green in between.  ND 1804 is a joy to ride – zero traffic, smooth surface, decent shoulder.  And million dollar views.

At the 24 mile mark, we hit our fifth state – South Dakota, and paused for the ceremonial state sign photo, then on into the small town of Pollock SD for lunch.   We talked with a nice family inside the Fin N Feather and they provided us advice on camping spots for the evening.

Down SD1804 out of Pollock.  Winds were minimal with temp about 80F and humidity high, which made for sweaty riding.  The route is quite hilly in here too.  Still, we didn’t mind much because every turn brought something interesting to see, a different angle on the river, a herd of cattle stampeding from us (we kept trying different sounds to induce them), the occasional deer, pheasant, or prairie chicken.  Much of the lush land appeared immediately ready for a golf course.

Jack announced that we were crossing our 2000 mile mark for the tour, so I had this goofy idea for a photo.

As we approached Mobridge, we started looking in earnest for a place identified on Google Maps as the Rogo Bay Recreation Area.  What we found was evidence that it might have existed, but was now probably private property, leaving us 4 more miles to town.  No big deal, right?  Except for the two long 8-9% grade hills in our way.

We made a beeline for the DQ and scored dinner: a float and a milkshake.  This wasn’t really dinner, but more like a happy hour, since we had plenty of food on the bikes.    I checked out a local campsite called Kountry Kamping and Kabins but found only a way-too-crowded RV yard with no apparent spots for tents.  So we lay around the large well-manicured city park for a while and wondered why we couldn’t camp there.

I popped into a convenience store and this kid immediately turns around and says,

“Where are you from?”

So I stare at him a second, and reply, “Where are YOU from?” which gets a laugh out of the cashier.

He says, “Mobridge, South Dakota, where are you from?”

And he goes, “You guys are CRAZY!”

“Well, we prefer the term LUNATIC.” He turns and leaves the store.  So I pick out my items, approach the register, and ask the cashier, “Where are you from?” And we both laugh.

In the end, we got back on the bikes an pedaled out of town to a state recreation area called Indian Creek.  VERY nice park by the lake.  I hopped into a truck with one of the rangers to cruise around and pick out a campsite, and it sure felt funny to be inside a motor vehicle.  By the way, Jack got another flat just as we reached the park, and had to walk the final ½ mile to our site, then fix it.  Icing on top of his day.

We’ve got a double-wide RV site all to ourselves, and we’re widely spaced out from the few RVs here.  Still, some of these RV campers are a little too loud too late, with yelling kids and yippy dogs.  Hopefully all will settle down soon but it is already 11PM.

77 miles today – one healthy and hilly day on the road.  With gorgeous scenery nearly all day.  Gary said he measured just under 3,000 feet of climbing.  Of the 12 more riding days we have to reach RAGBRAI, we have about 3 more of these longer mileage days scheduled.

In all, it took us 7 riding days to make a big zig-zagged “L” through North Dakota, covering 410 miles.  As I’ve stated before, such stats really have nothing to do with the art and pleasure of this tour, but they do provide some secondary interest.