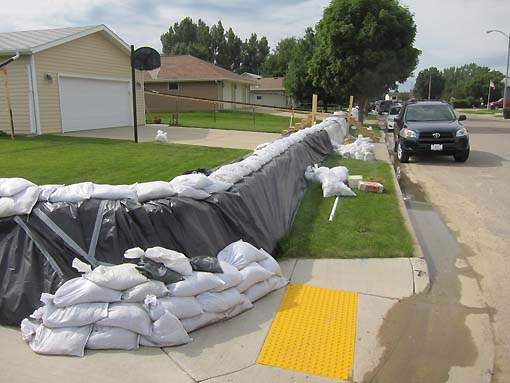 A trek to the grocery store first thing this morning was needed since we’re headed into to primitive camping tonight.  We then hit Perkins for omelettes and pancakes – what else.  Mr. Pancake.

South out of Bismarck, we passed by a neighborhood that was readying for flooding.  I couldn’t believe the preparations.  Sandbags not only barricading each house, but team efforts that barricaded whole blocks of houses.  Well-designed steps leading up and over the sandbag walls.  And elaborate plumbing of the houses rain gutters so that the runoff would drain into on the other side of the sandbags.  I’ve never seen anything like it.

As we rolled down ND1804, we encountered very typical rolling terrain along the Missouri River (which is actually called Lake Oahe up here) .  Unlike last year, the river was very often in sight due to its tremendous width.  We faced headwinds the whole way, and some pretty ominous clouds were building.  I think Jack and I timed the donning of rain gear almost exactly right, because the skies soon started out with some thin rain, and then some “big ol’ fat rain.”  No big deal of course – we are fully used to it by now.  Riding beneath some of these skies, however, actually had me looking for funnel clouds.

The rains let up some and we even got a tailwind for a while (I say about 45 minutes but Jack insists it was only 5 minutes).  In any case, I really started to enjoy the riding day.  Cool temperatures, interesting skies, great sights.  The rolling terrrain turned moderately hilly, something else I actually liked.  No towns enroute, so I munched candy Runts most of the way.

The 60 miles went by pretty quickly.  I was interested to see if the Bayside Resort (west of Linton ND, formerly Bosch’s Bayside Bait and Tackle) was operating, and when it came into view I at first saw one pick up truck, and then…bikes!  Bill and Gary were sitting out front waiting on us, and the beer signs were lit.   Excellent!  The four of us went in for an arrival beer, which turned into a cheeseburger too, even though we had plenty of food on the bikes.

Off to Beaver Creek Campground.  It turns out that we are camping in the very same campsite that Randy and I used a year ago.  It is a real pretty place tucked into the woods, with birds chirping and squirrels running around.  The only thing different is that the lake has really overrun its banks, causing some erosion and driftwood crammed up against the shoreline.   We are all wondering about the 20 vultures circling overhead in the sky too.

61 miles today.  I really enjoyed today’s riding due to the cool temperatures, interesting and varied weather and skies, and the beautiful moderately hilly terrain.  It helped that I felt strong too (the knees too!)   The next three days will be relatively long rides so I hope the winds will cooperate at least some of the time.   As I sit here in my tent it is now a perfect still twilight but Roger is predicting more rain, so we’ll see what happens.