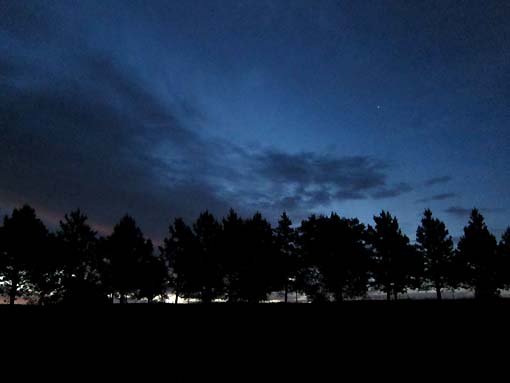 Fantastic stars last night – the best of the tour so far.   By sliding my sleeping bag up and opening the tent fly, I had a perfect view of half the sky for the entire night, well, when it wasn’t blocked by eyelids.

Ran into another bull snake down ND1804 – there seem to be plenty of them around.  This one blocked the bike lane but just snaked off at the unwanted attention.  I read that these guys intentionally mimic rattlesnakes, and occasionally eat them too.

ND1804 took us along the Missouri River in very typical fashion, up hill and then down hill, but the riding is very beautiful.

Tomorrow is a rest day so Jack and I grabbed a motel room for a couple of nights –  we both like the camping but have decided to try to hit motels for the rest days.  In the end, Jesse and Frank decided to wait in Bismarck for us, so Bill, Roger, and Gary joined them at the KOA.

Laundry first.  We had to ride a mile on the bike to the laundrymat, and I was struck by the dilemma of how to do all my clothes in one load (without shocking other patrons of course).   It couldn’t be done, I decided, and ended up doing a few items in the shower later on.   Where is Linda – I can’t seem to figure out this laundry thing.

Rest and wi-fi, and dinner at Paradiso Mexican.   We waited a few hours for dusk and then took a stroll down the road to get a perch for fireworks from the state capitol building.    A large number of locals had set up chairs by the DQ, dutifully addressing shakes and blizzards.   But Jack wanted to get a good sonic experience too, so we proceeded to the capitol itself to see what was going on.

We found hundreds of people strewn out on the capitol yard, politely and evenly separated like something out of that famous Seurat painting.  An orchestra was playing wonderful symphonic music and a good PA system broadcast it nicely for all.  We grabbed a beverage, found a place in the grass, and spent more than an hour listening to some great selections, music from both masters and movies.  North Dakota’s own troubador Chuck Suchy played a couple of enchanting songs with stories from the prairie.   One speaker talked of the mighty Missouri River and how residents were “mad” at it this year, talked of Meriwether Lewis and William Clark and their guide Sakakawea.  All of these things helped a little bit in describing life on the Northern plains for us.

Of course, the program concluded with the orchestra breaking out the 1812 Overture and other patriotic staples as the fireworks erupted overhead.  Jack and I wondered at our great fortune to be sitting way up here in Bismarck North Dakota sitting among these fine friendly folks celebrating the Fourth of July.

Short riding day today, only about 30 miles.  The last three days have been short ones, and I figure that we’ve esentially burned one of our margin days in the process.  A good way to use it I think, since the riding and scenery between Totten Trail Resort and Bismarck were great.   However, I did discover a small error in my planning spreadsheet, and now estimate that, by the Adventure Cycling routes, we’re about 740 miles from the start of Ragbrai, with about 14 riding days (plus 5 rest/margin days) to cover it.  That averages a little over 50 miles per riding day – still a comfortable pace.    Again, some of our riding days will be longer or shorter depending on where camping spots are.  And we can probably elect to take some straighter county roads as desired.

Jesse has decided to take a more direct route to Omaha (about 580 miles), including more than 400 miles on the interstate (I-94 and I-29).  I heard that Frank will be going with him.  I’m glad they are riding in the style they want to, but I am really not sure what the appeal is about so much riding on the interstate.  At least there should be some parallel options on county roads.  Whatever turns your turban – independence reigns on this tour.