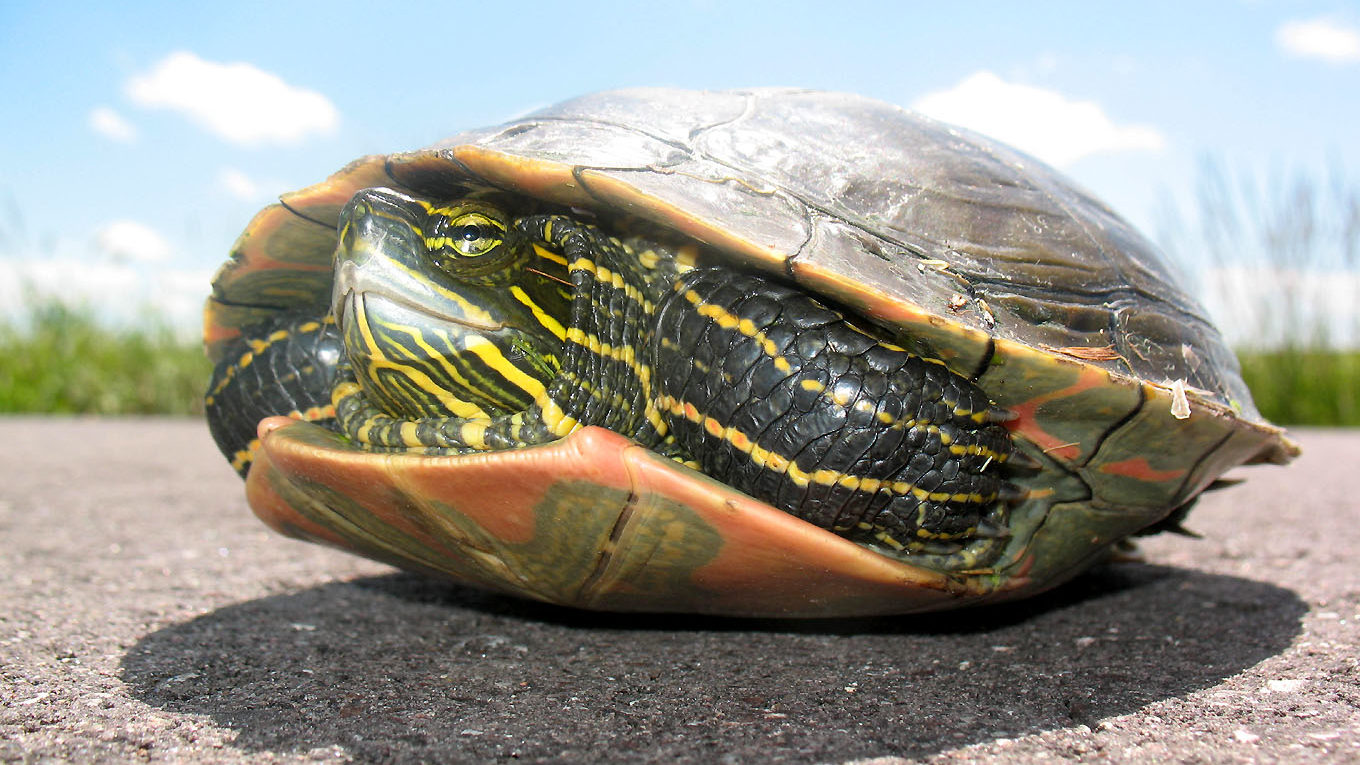 Due to my residual cold symptoms, I’d popped a NyQuil tablet last night to help me sleep. The rains and lightening had started up around midnight, and I remember awakening to zip up the rain flaps. They continued throughout the night and on into the morning, beating steadily on the walls of my tent. No problem. NyQuil + earplugs = sound sleep.

Around 8AM I woke up, a little groggy from the meds but very comfortable. The rains continued steadily, and for almost an hour I just lay there, thinking, hmmm…maybe I’ll just lie here in the tent all day.

Around 9am I heard Randy’s voice outside. The rain had slowed to a spit and it was time for some breakfast. Instead of riding, we decided to walk up the hill and over to the restaurant. Both our breakfasts were considerably better than dinner, and I enjoyed French toast, 2 eggs, OJ, coffee, and water.

About 18 red-hat ladies sat at a nearby table (odd birds), while Randy and I discussed our route options. The goals were to get to Sioux City by the 23rd, reduce the mileage per day, and perhaps reduce the hill climbing. One option took us away from the river through Armour. The other took us through Pickstown. Either option led to shorter days, around 45 miles per day.

Both options took us east out SD 44, so we decided to hit the road, ride to nearby Platte, and make decisions based on the winds and our intuition. We walked back and broke camp. Winds had picked up significantly, screaming off the lake, but I couldn’t really tell the direction. Not a good sign.

As we re-traced our path east on SD44, we passed a van parked on the north side supporting a big group of cyclists. They were riding cross-country in support of a cause. I passed many pairs of girls just cruising in. This was evidently a group that got started very early and finished their miles up by mid-morning. Here we were just getting started!

The winds were much quieter up off the water, and coming from the NW. Nice – we were headed SE. As we rode today, I reflected on the fact that South Dakota drivers had been overwhelmingly courteous to us throughout our tour. They consistently gave us wide berths, friendly little honks (not those get-off-the-road blasts you sometimes get in Phoenix), waves, nods, smiles, and I had even gotten that wolf whistle (OK, not that friendly please).

We continued east 20 miles from the river, and rolled into the small town of Platte. At the grocery store there, I scored a few rolls of fruit Mentos, and a delicious cherry tart. The day was simply glorious, with 10mph winds out of the NW pushing us along. As we continued, I caught sight of another pretty terrapin turtle on the road surface, and stopped again to save his life. And this time I remembered to focus the camera!

With these winds, we decided to head south, and another 10 miles brought us to the town of Geddes. With temperatures rising, we sought out a convenience store, but found none. Instead, we found Geddes to be a tiny agricultural town with a dusty main street with a small row of empty aging buildings. We rolled into town and found a 1950’s-era gas station with 2 locals lounging out front with one old dog. Randy talked to them and discovered they sold cold pop for 75 cents, so we each got a can, and chatted for a few minutes.

Randy started admiring a once-thriving hotel across the street, one that was boarded up but clearly a real beaut in its younger days. Geddes seemed to be a ghost town, and this gas station seemed to be the only business. I roamed around inside the station and asked if I could take a picture of the beer can collection in there. One of the guys gave me consent, and then out front I heard him say something about, “I guess he doesn’t want a photo of the collector.” “Sure I do!” I piped up, and the friendly guy came back and mugged for my camera.

We rolled due east out of Geddes on County Road 34, by grain silos and rolling green fields, then a turn south on County Road 20. Fifteen miles past Geddes we entered the third town of the day, Lake Andes. We stopped at a grocery and received at least 3 very friendly inquiries about our traveling. I thus assumed we must be off the AC Lewis & Clark Trail.

Winds had died down dramatically. Another 7 miles took us in to Pickstown, our destination for the evening. Another very pleasant ride today.

We checked out a convenience store, asked about camping, and bought some beer. The place was called Abby’s Café, and I noticed that they served meals. I particularly noticed that they had “Broasted Chicken” at the top of their menu. We checked out one other restaurant closer to the river, then rode about 3 miles across Fort Randall Dam and located the South Shore Recreation Area.

Great looking spot, primitive but empty. Restroom, table, and a very nice swimming cove off the lake. For an hour, Randy and I kicked back on the table and slurped down our beers. In Randy’s parlance, “Life is Good.” We discussed dinner plans, and I mentioned Abby’s chicken, but Randy had a desire to use up a can of chicken he was carrying, and so was planning a chicken and rice casserole in camp tonight.

I set up my tent, ditched my bags, and we both jumped into the river. Randy took a real soap-and-washcloth bath, while I just waded in and dunked, still in my cycling clothes. It felt fabulous.

While Randy finished up, I put my cycling shoes back on and jumped on the bike. Pedaled 3 miles back to Abby’s and ordered up 4 pieces of broasted chicken, potato salad, and a can of 7-up. It all fit fine in my rear trunk, and as I pedaled back to camp I wondered if this “six mile chicken” was going to be worth the effort.

By the time I had gotten back, Randy was already finished with dinner and had set up his tent. He set it up on a little bit higher ground than me, and, as I looked at the cloudy sky, I quickly agreed that this might be a good idea, and so moved mine higher as well.

Finally, the chicken. MARVELOUS. Seasoned up with spices and just the right amount of salt, crispy on the outside, hot and juicy on the inside. Four pieces would have been too much on a normal day, but the cycling had enflamed my appetite, and this load of chicken was just perfect.

After dinner, I started feeling guilty because we had not paid the self-serve camping fee. I was beginning to really appreciate that these camping areas are designated and maintained, and paying the fee seemed the least we could do. I rode up to the box and discovered they wanted $8 but I only had $7. I put it in the envelope and wrote, “Sorry, I only have $7 cash.” 84% good intentions.

By 8:45pm we both had hit the pillow. The sky was bright, the locusts were peacefully singing, the campsite empty, and we were both tired. I found the evening in the tent warm and sticky without a whiff of breeze. But I remember thinking that we were in a good spot now, with only short days ahead.