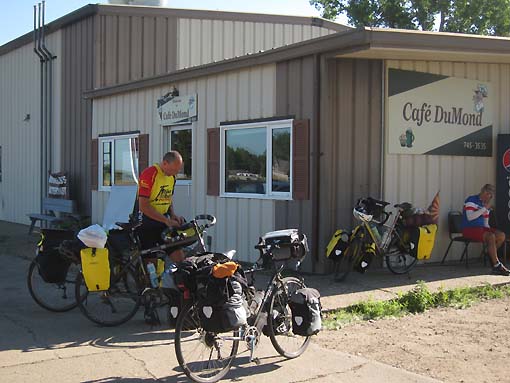 I am truly finding every day on tour great in its own way.  But some days just stand out.

Breakfast at Café Du Mond in Stanton ND, pancakes (Kimmie scale = 5.5) and eggs as usual.  Then south on SD31 into a headwind.  For the first time Bill rode with us, taking his usual pace WAY down.  He said it was actually a difficult thing for him to do, and he really had to work at it.

Gary spied two snakes, one of them a rather big bull snake, by the roadside.  Bull snakes look similar to rattlesnakes and they even make a rattling sound through their mouths.  They also must be pretty testy, because this one was really perturbed simply because we’d stopped our bikes nearby.   When I tossed a pebble in its direction it lashed out and bit, then recoiled and arched up like a cobra.  Aggressive things.

I’m not sure why this carp was on the roadside by this cone, a large distance from any water.

Gorgeous day to ride and perfect roads to be riding on (SD31 and then SD200A).  The route took us on a curve back across the Missouri River, and we found Roger parked in the very center of the bridge.  There is something about the geometry of the bridge that concentrated cool evaporative breezes from the river on one side, and it felt like a wonderful air conditioner.  We lined up on the bridge and spent at least 15 minutes meditating, breathing the cool moist air, gazing as the beautifully wide Missouri River rolled by beneath us at 6.8 mph.  Does it get any better than this?  We did not want to leave.

In to Washburn and up to US83.  Since it was a Sunday our food options were limited, and we stopped in at Captain’s Cabin Bar/Grill.  We enjoyed decent eats and some time watching the Wimbledon mens’ final, we then stocked up on groceries for our planned evening at a no-services campsite.

Fifteen miles due south into a steady headwind, but nobody minded too much because the distance was short and we were in no hurry.  We found the Don Steckel Boat Landing just the way Randy and I had left it last year.  Primitive.  Isolated.  Pretty.  Great for tenting. Perched over the Missouri.  Only this year the river was absurdly wide.

We spent a few hours clowning around, shooting some fireworks, drinking some beer, and otherwise consuming what we’d brought for dinner.  We met a couple with a new pooch, a friendly local bike rider, and we saw a few dozen Harley riders.  Pretty soon all our pads were stretched out on the grass in the shade and we just lay there, kidding around and reviving a few memories (that we could remember) from our trip so far.  Does it get any better?

At 8PM it was time to start our fire and Roger got it going in no time.  We experimented with our fireworks in various ways: trying to explode a Pepsi bottle with an “M150” (failure), trying to heave a lit “M150” into the river for an underwater explosion (success), and trying to shoot a parachute bottle rocket into the wind at the right angle so as to retrieve the parachute (success).   The setting sun, the big river rolling by, a campfire, the isolation, and playing with fireworks.  Man, does it get any better?

At about 10:30PM, the sun had finally set and a few biters started attacking, which called for the big finale.  Jack lit a can of “showers” fireworks, and I cranked up “The Star Spangled Banner” on the netbook.  The firework started out fairly tame but then got really going for a couple of minutes and ended with a nice sparkly shower.  Or so we thought.  We were all laughing about how cool it was and suddenly it erupts for one final dramatic burst of sparkles and crackles.  Yeah!  Our version of the Fourth.