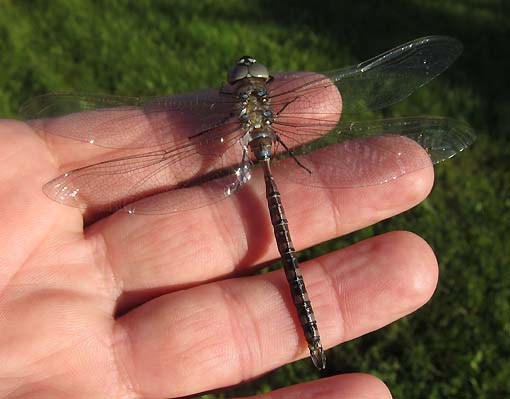 Relaxed departure from our camp at Totten Trail Resort ND this morning for a short riding day.  We rolled across a 2 mile land bridge that separated Lake Audubon from Lake Sakakawea.

Our route called for a turn onto ND48, but when we reached it there were ROAD CLOSED barricades.   Gary, Jack and I asked ourselves if we felt lucky, and the answer was yes, so we turned onto it and started down.  Roger, about 150 yards back, stopped at the signs, saw us rolling along, and started crowing, “What is going on!?”  which totally cracked us up. [The passage was fine.]

We actually headed back west for about 12 miles, stopping in Riverdale for breakfast.  Jack was wondering if Archie, Betty, and Veronica might be featured somewhere, but we never saw them.  We learned that the entire town of Riverdale was built by the Army Corps of Engineers back in the 40s as part of the construction of Garrison Dam, which dams the Missouri River and creates huge Lake Sakakawea.  The town was only turned over to private citizens 14 years ago.  It’s peaceful, quiet and well trimmed – it reminded me of that town from The Truman Show.

An hour of wi-fi catchup for me, then lunch at the Knights Lodge.  Afterwards, I spent another 45 minutes of wi-fi because I was so behind.  My companions left me, so the rest of my riding day was alone.   This caused me to be even slower than I usually am, stopping for every flower or bird sighting or photograph I might want to.

Our route took us right over Garrison Dam.  It turns out that hundreds of cars were collecting there since, for the first time ever, the spillway was open and the waters were raging.  It was sort of neat, but any decent vantage spot to view it was blocked off from viewing by signs and rangers.  I figure this is the most action these COE guys have seen in years.

One of the really weird things (it turns out for all us cyclists) was the collection of yards and yards of cobwebs on our bikes as we rode across the dam.  I stopped at one point to wipe tons of this stuff off and a ranger yelled at me to keep moving (a cousin of Barney Fife I think).  After reaching the other side I took this photo – and this is after removing the stuff once:

Our route also took us finally into some brilliant fields of canola.   The acres and acres of brilliant yellow are hard to describe an even harder to photograph.  I’d been missing these further north and was glad to see them here.

Finally to the pretty town of Stanton.  The gang regrouped at the Knife River Indian National Historic Site and we all checked out the neat earthen lodge there.  Then a roll into the tiny town.  We spent a few hours miling around town for ice cream, beer, packaged dinner, etc. since no restaurants were open, and Roger set off a few fireworks too.

Now we’re in the city park (once again).  This one is nice enough and features large amounts of “snow” cascading down from the cottonwood trees.    A comfortable riding day of 45 miles.  I did some ciphering tonight and calculate we have 830 miles to get to the start of Ragbrai and 21 calendar days to to it.  Even assuming 4 rest days in there, that means we’ll need to average about 48 miles per riding day, so we’re on a good plan.   Of course, some of our riding days will be longer or shorter depending on where camping spots are.

I talked to Jesse today and he is now rolling, having found a mechanic to fix his wheel.  He plans to make Bismarck tomorrow morning and may not wait there for us, instead heading on south to the Omaha area to the Ragbrai start.  He’s not sure what Frank will do.  All this is good – I want him to be riding the route and style he wants to ride.   As usual, we’ll see how this develops over time.

The current fivesome is a really good touring group.  Everyone seems to be getting into an especially good rhythm with the camping routine, and enjoying it, and we’ve now tented for 11 days in a row.  The pace and daily distances (with the exception of that 96 mile day) are also working out well.  Bill is the standout rider among us, being MUCH faster than the rest of us, but he seems to enjoy arriving early and then kicking back, reading, and scouting out the towns.  Some mornings he even starts out a little bit later (grin).

One thought on “RA33: Lake Sakakawea”