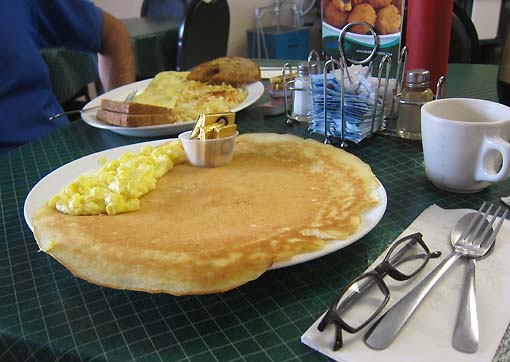 [We’ve been out of wi-fi range for a few days now.  Four new posts are below.]

Nice sleep last night at the Berthold ND park, then an equally nice breakfast at the Tumbleweed Café.  I know it is cliché for touring cyclists to take pictures of the food they eat, but I had to do it this morning because my pancake was the biggest one yet (no, I couldn’t quite finish it).   Jack says that Fran wants to start calling me Mr. Pancake.

We took CR10 out of Berthold, a really nice secluded road that took us through Des Lacs.  Great riding, and Des Lacs looked like one of those idyllic little places to live, all trimmed and quiet.

A few more miles brought us back to US2 just west of Minot, and right next to the flooded Souris River.  We crossed US2 and started to approach the flood waters but a National Guardman with a Hummer stopped us, then gave us an OK to proceed and take photos but not to leave his sight.  He was guarding against looting.

I’m sure that CNN and FoxNews have much better photos than we could take, but the extent of the flooding even in these few shots is really evident.  In one photo below, the water is all the way up to the roofline!

We eventually took a turn south onto US83.   My back tire started to get bouncy, and I finally had my first flat of the tour, caused by a single sharp shard of metal that pierced right through everything.  As far as I know, now only Bill is flat-free.

I spied Roger and we followed him into a fireworks store.  It was really an amazing store, crammed full of just about any consumer-grade fireworks you could want.  We had all kinds of fun laughing at the different names, wondering what each might do, and picking out a small assortment for entertainment during camping.  One that cracked me up was named Bin Laden Noggin, with a caricature of him on the outside.  (By the way, Linda, I did not see an Improved Twitter Glitter.)

A bit further on US83, Roger was riding 100 yards ahead and for fun he’d picked up the end of a yellow caution tape.  The tape was tangled up in the grass to the right of the roadway, and was unwinding as he rode.  With about 100 yards of the tape showing, it suddenly snagged up and I saw Roger stop and put a foot down.  I reached the end of it and untangled it and he then continued on his way, pulling out an outrageous amount, something like 300 yards.   The tape starts blowing in the crosswind and drapes out onto US83.  This sight of Roger chugging up a hill with 300 yards of tape behind him has me in stiches.  Pretty soon cars are hitting it and Roger finally decides things are getting out of control and drops the end.   A truck hits the tape and snaps it loudly, then flies on down the road with the tape flapping.  I’m just cracking up at all this, especially when we crest the next hill and a truck is pulled over on the shoulder with cones.  (Fortunately it had nothing to do with Roger’s mischief.)

South on US83.  Stiff cross winds from the west today made the ride slow going.  Also, all the eastbound US2 traffic out of Minot was being diverted this way so it made for some loud riding.  Fortunately, after 15 miles, the traffic was shuttled east on CR23, leaving us a much quieter and smoother ride.  The shoulder is very wide, and the hills are very long rollers, very pleasant to ride, with views that go for miles.  Wind farming is big in this section, and it’s impressive to see how large the wind turbine blades actually are, spinning in a stately fashion only 20 rpm or so.

Evidence of excessive rain was evident everywhere.  Last year the fields were vibrant in bright yellow (canola), light blue (flax), and bright green (winter wheat).  This year there is standing water almost everyhwere you look, and I’d say the majority of fields are unplanted.  The contrast from last year to this year is interesting.

A stop in Max ND, the only town on our route today.  We hit the café for burgers, Coke, and some rest.  Then onward south to the continued crosswind to the north edge of Lake Audubon and the Totten Trail Campground.  Bill and Gary had already arrived and found the grounds full, and the attendant would not allow us tiny tenters to stay there.  Oh well.  We’d sort of forgotten that it was Fourth of July weekend.  What day is this again?

We considered options of riding further to Coleharbor or Riverdale, but nixed that when the Totten Trail Restaurant and RV park owner eventually showed us a little area of grass and charged us $10, which included use of the RV showers.  Deal.

Another 65 miles today.  We’ve made rapid progress through North Dakota so far.  Now that we’re back into some interested territory around the Missouri River, and onto some quieter roads away from the Williston madness and Minot mess, I think it is time to slow down.  We’re planning on taking it much slower the next few days on the way to Bismarck.