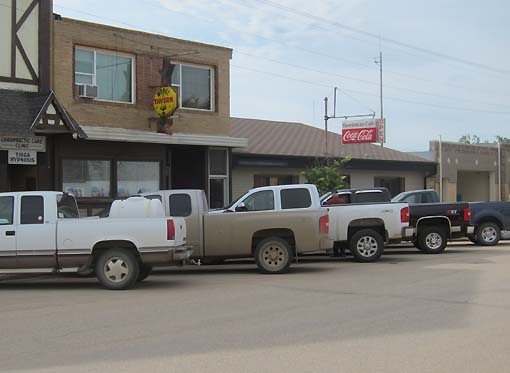 Tioga ND looked a little better in the morning.  Still, it was one of the few city parks we’ve stayed in where I was a bit concerned that my bike would still be there in the morning, and was glad to see it.  Bill said he’d even seen a brothel business being operated out of a pick-up truck last night, servicing the RV clients next to the park.  Can you imagine?

Jack and I left last from the park, then hit up the town for breakfast.   I noticed that practically every vehicle parked in town was a heavy duty pick up truck, you know, an F250 or F350 or RAM2500.  Maybe a required macho item around here.  I wonder what they thought of us in our bike clothes.

We fought our way south again on CR40 and back onto US2.  Winds were in our favor, and Jack and I flew nicely past the next little town of Ross and into Stanley.  We found Gary just leaving a laundromat, then decided to hit a café for a small lunch.  A guy sitting at a large table immediately called us over and asked that we join him.  The fellow, named Jim, had seen us rolling around town and had wanted to stop and chat, and was delighted that we’d dropped in.  A reflexologist, it turns out he is also a road cyclist around Stanley and Minot and other places here in ND, and was interested in aspects of our touring.  We sat and ate and talked with him for an hour until he finally had to leave.  When Jack and I went up to pay the bill, we learned that Jim had paid our tab!

East of Stanley, the oil insanity finally starts to lift and the road gets a bit safer and quieter, even though the shoulder was hit-or-miss.  We continued to enjoy a nice tailwind and completed the remaining 30 miles into Berthold ND easily, finding the guys at the Centennial (city) park.  It is a beautiful park for tenting, albeit with only a port-a-john bathroom.    Unfortunately, this town gets its water from Minot, and the health department has banned it for consumption.  But we all bought gallons of water from the store, as well as a cold dinner, since the town’s lone restaurant serves only breakfast and lunch.

64 miles today.  It sure was nice to have some time to set up our tents mid-afternoon and clown around for some hours.  Jack and I sat for almost an hour watching a little league game in progess next to the park.   We talked with a new riding companion, Owen, from the UK.  And we video’d Roger opening his “instant” tent.

Tomorrow we’ll bypass Minot and head south.  All reports say we shouldn’t have any trouble getting through.  By the way, I talked to Jesse today and he and Frank are in Medora ND (on I-94) unfortunately with bike trouble.  Jesse is now waiting on some parts, which should come within a day or two.  Their delay should actually work out fine with respect to rejoining us – otherwise they might have been waiting 2 or 3 days in Bismarck.  I hope the repairs go smoothly for them.