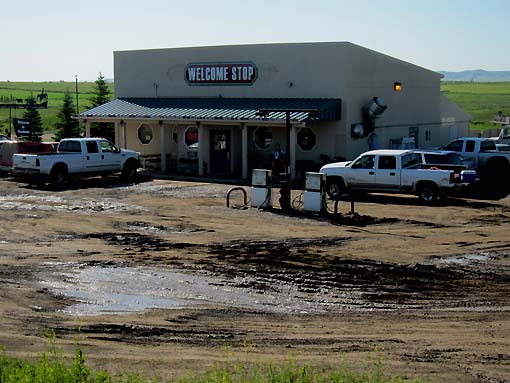 Early start (for us) from Culbertson MT at 7AM.  Roger and Bill took off even earlier.  We said a tentative goodbye to L. E. because he did not immediately favor the idea of going all the way to Tioga.

Another 8 miles brought us to yet another milestone – the North Dakota line.  In all, it had taken us 15 riding days and 787 miles to cross Montana – in other words – plenty of zig zagging north and south.  These stats don’t really mean much when it comes to touring, so I’ll add that we sure crossed Montana in some seriously fine fashion.

Another 17 miles to Williston ND.  Williston is where my first tour with Randy started last year and my memory of the place was a fond one (at least, after the nightmare of getting there).  Unfortunately, I can no longer say that.  Williston is now a congested little town choking on itself.  It is infected with an oil industry boom that has multiplied since last year.  The nice city park, a natural meeting place for cyclists converging on the Northern Tier and Lewis and Clark trails, is now closed to all camping due to unsavory transient oil workers who started making a home there.  There are no motel rooms available for months, RV parks are choked, and there are ugly camps of quonset hut rooms set up on the highways for workers.  Roaring trucks scream by at all hours, scurrying to get to the wells, scurrying to deliver oil, scurrying to make a profit.

In short, Williston, a long time friend of cross country cyclists, is no longer a friend.  It is a town now to be avoided.  We did just that.

We skirted the southern edge of town, then rode north on the eastern edge.  Temperatures were already up around 90F – steamy hot.  We finally found an Albertson’s and stocked up for dinner and a continued ride to Tioga ND.  It was already 2:30PM (we lost an hour at the ND border) and we knew we had 50 more miles to go – it was going to be a long day.

Up US2, then east on CR6 to Spring Brook.  The county roads were less graded than US2 so we did a fair amount of unwanted climbing (especially in this heat).   Another 8 or 10 miles north through Epping had us near heat stroke, so we pulled in to the Epping Saloon.  The town of Epping is pretty cool.  The roads are all dirt, and the few buildings there have a great looking historic charm.  You can tell that a revival effort is happening, probably spurred on by nearby oil industry projects.  It was a great spot to sit and recover, and we had a couple of Cokes and talked with a bunch of the oil workers in there.  They thought we were crazy for riding on a day as hot as today (but we prefer the term “lunatic.”)

The next 30 miles took us to Tioga, via a milkshake, 5 bottles of water, and another near heat stroke.  The road to and from Tioga from US2 is poor for cyclists, and our reward for reaching it was to me an unattractive scene.  Clogged with oil industry supergrowth, RVs, cheap businesses, and just the feeling of a low-rent economy.   We’re camping tonight in the city park, which is packed but least has a shower.   If it sounds like I’m complaining I’m not – all of this is very interesting to observe and I’m glad we’re here.

96 miles today – a day too long and hot.  We probably won’t try to do that again.   But we accomplished what we wanted to do: space Williston and Minot out of our plans.  Tomorrow we might have some tailwinds which would be well deserved.

One thought on “RA30: Oil Madness”