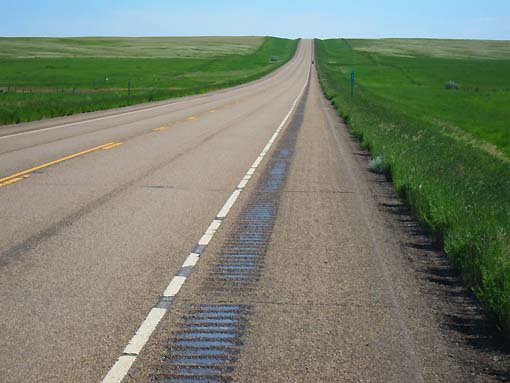 Rain again last night in Malta, MT.  Somehow it is always quite pleasant when you’re tucked inside your dry tent.

Immediately out of the campsite Jack stood up on the pedals to an explosive pop.  His chain had broken, a belated consequence of the spill yesterday.  He removed 2 more links (for a total of six) and had it back running smoothly in short order, albeit with black hands.  With the shortened chain, Jack said it was a good thing he almost never uses his large chainring.

Jack and I had a pancake breakfast in town, then off down the long road again.   Mild tailwinds helped us along nicely, and with each passing hour they got stronger and stronger.  If it weren’t for our interesting detour yesterday, we probably would have taken the Adventure Cycling alternate route today by the Bowdoin Wildlife Refuge, but decided against it.

We were expecting to enter the worst mosquito area yet.  Locals had warned us repeatedly of the “Saco Flats.”  Mosquito clouds supposedly rose like small cyclones here and were visible by Doppler radar.  When we reached the flats, we found miles of very beautiful flat marshy areas, but almost no mosquitoes.  We’ve found that some locals like to exaggerate the perils to us cyclists.

26 miles to Saco, where we stopped at a grocery store.  Roger was nearby trying to nurse a leaky tire back to service by chanting, “Heal!  Heal!”

Another 14 miles to the small town of Hinsdale, where we waited at another convenience store.   Roger had left only ¼ mile behind us, but was now nowhere to be seen.  Within 10 minutes or so, it was obvious he’d had trouble.  Instead of backtracking, we decided to wait, and 20 more minutes brought Roger churning up the road.  He’d had a relapse of the leak and had changed out the tube and tire for a 20mm one he had spare.

While we waited, a white Cadillac pulled in with a very serious collection of mosquitoes on its front grille (yes, these are all mosquitoes).  With permission, I took this picture as a reminder of eastern Montana.  If bikes could go as fast as cars, our bikes (and teeth) might look something like this.

Another 29 miles to Glasgow, our home for the night.  Jack, Roger, and I spun around town trying to find the others, first at McDonalds, and then found them at the library.  There was some talk about changing our planned route through the Dakotas due to flooding , but a check of current NDDOT maps revealed no causes for change.

We set up at our campsite on the grounds of the Glasgow MT city pool, where a 2-day girls’ swim meet is in progress.  The yard is surounded by big RVs and several other tents were already set up, so we mingled in with them, and made ourselves at home (no charge).  I hope their late night antics are not going to be a problem – we’ll see.  Frank did not like this campsite and left to find one with a shower and laundry.  After some effort, Jesse snagged a motel room – I do not know why there is a demand here in Glasgow.

A good dinner at Sam’s Supper Club in town.  ½ lb mushroom burger, fries, and 2 draft Fat Tires – what more could you want?  As Jack would say, “Does it get any better than this?”

75 miles today, one of the longer mileage days planned.  It was a good thing to have the tailwinds today, with clear blue skies and temps in the 60s and 70s.  Perfect riding conditions.