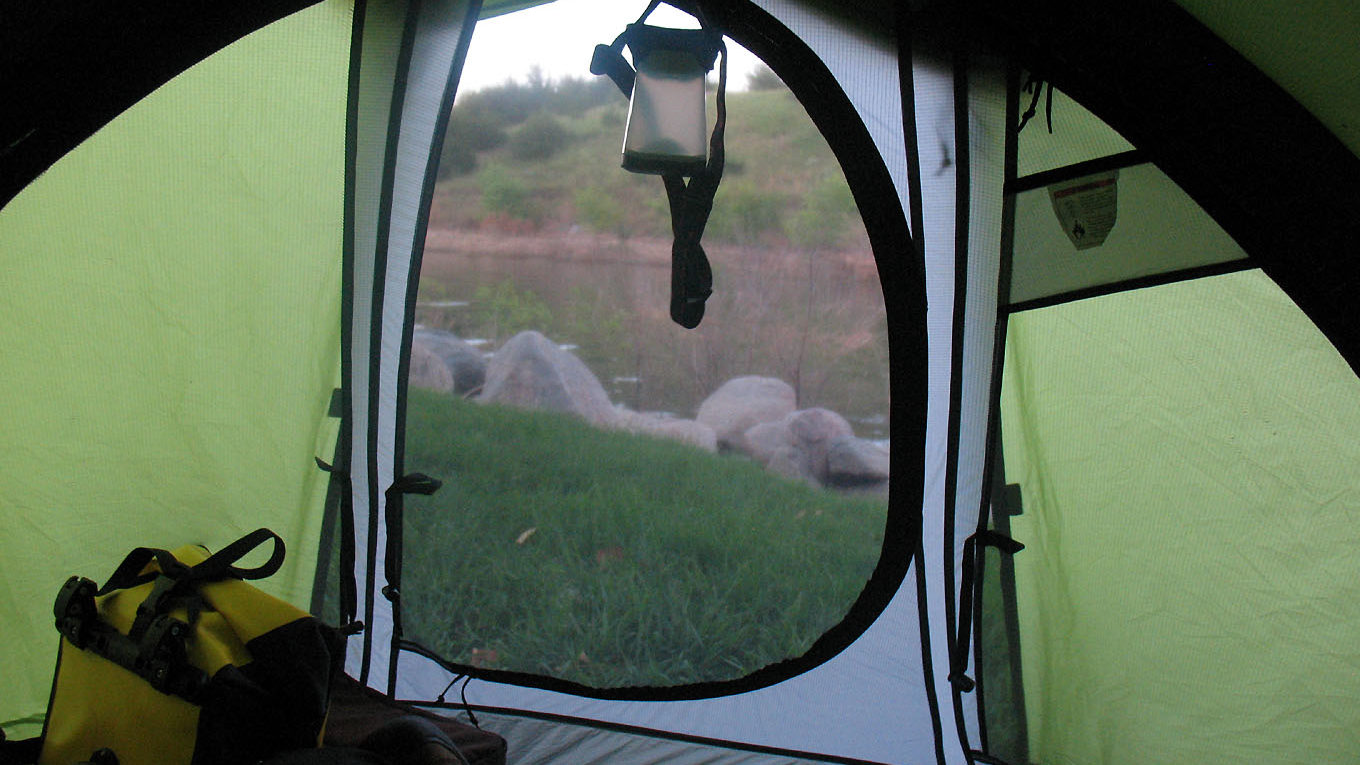 Up sort of late this morning at 8, and I walked down to Randy’s room. We adjourned to the hotel lobby, where the wi-fi signal was better and coffee was being served.

While we sat, Randy booked a room in Sioux City for 7/23, although I offered him hotel space with my family. I decided to give Linda a status call and went for my phone. Damn, where is it? Damn, I know where! I had left it hanging on the wall in my Super 8 motel room in Pierre.

I used Randy’s phone to call the Super 8, and sure enough, they’d already found the phone and charger. I then called Linda. The family was on the road and in Santa Fe already! I asked her to call the Super 8 with instructions on where to send it in Sioux City (since I did not know where we were staying). Besides my flat tire, it was the first problem I’d had the whole trip. And as problems go, certainly a minor one. Thank you, Linda!

Randy and I packed up for the road, and, with no other choice, headed over to the Lone Star Casino for breakfast. I had pancakes and eggs which were not too bad. Randy had a bowl of oatmeal that was some horrible stuff. Randy justifiably asked, “How can they fuck up oatmeal?”

I hit the Dakotamart one last time for candy and bananas, and we rolled out down BIA Hwy 4 south out of Fort Thompson. For about 1.5 miles, we were presented with a soft 2” thick layer of gravel across the entire roadbed. Randy seemed to handle it fine, but I had a tougher time with it, snow-plowing at times, so I proceeded quite slowly.

We finally emerged onto a patchy road surface that paralleled the river, and offered us some very excellent riding. Hilly, no traffic, winds were helping us from the north, as we were hugging the river heading SE. The views were very beautiful out over the river. We tackled a couple of good climbs, and then were rewarded with a ripping roll downhill into the town of Chamberlain, SD, some 26 miles into the day.

This was a sweet little town nestled against the river. The primary business appeared to be tourism, or fishing, or a combination maybe. We explored the pretty Main Street area and found a McDonald’s, from which Randy wished an order of French fries. Unfortunately, a swarm of 60 young church people from a bus were cramming up the order desk, so we rolled back out down Main Street and found the Anchor Grille. We sat at a great little table over looking the street and ordered up a second breakfast. For me this included 2 eggs and an oversized ham steak.

Chamberlain was so nice that we considered spending the night. In the end, we reasoned that the weather was too fine, and the NE winds were too helpful, to call it a day yet. I stopped one more time out of town at a general store and purchased more hamburger rolls for PB&J sandwiches, figuring I might need them for dinner tonight.

Onward heading east out route 50E (E. King Avenue). A nice winding climb out of town, then a turn due south. Nearing the junction with I-90, we instead turned due east on Highway 16 and rode 6 miles into the town of Pukwanna. As I passed one residential driveway out here, a couple of goomers looked up and one of them wolf-whistled at me. Wow, maybe he liked my legs.

From Pukwanna, we turned onto County Road (this is again Route 50E) and headed south. We crossed I-90, which seemed like some kind of achievement to me. Stopping on the overpass, I gazed at the freeway with the memory that only 3 years ago, Janel and I had motored west-to-east by this very spot.

For the next 30 miles we saw nothing but grass fields and trees, and no services. The breezes continued from the east and were nicely cooling, SO much better than yesterday. Randy and I separated, then rejoined, then separated, as usual. I ate a couple of small roadside lunches. At one point, Randy told me he was “cooked.”

Through Academy, SD, a very tiny town. By this point I was starting to wear out a little myself. We endured several due east segments of the road, right into the winds, but otherwise south until meeting up with SD44. From there, it was about 4 more miles to the Snake Creek Recreation Area, 2 of them hugely downhill. We deserved it. 74 miles today – a good ride.

A cute girl ranger suggested we buy a permit for one of the remaining three non-electrical sites, and suggested I check them out. The first was surrounded by RVs and had only sloped areas. Nix. The next two were thin little slivers of flat ground tucked between the access road and the lakefront. Nice views, a little far from the restrooms, but do-able. A few RVs were around us but they seemed quiet enough.

We set up tents and unloaded. The views here were quite beautiful. Our tents were set up not 15 feet from the water’s edge and we were getting some nice breezes to boot. For a real bonus, this site offered a restaurant across the street, one called Dock 44. We rolled over there and scored a couple of cold draft Amberbocks, which tasted so good I can’t even describe them here.

We initially sat by a table full of ladies playing cards, which the waitress warned us about. We laughed and said that was fine until the game got underway, and the uncontrolled shrieking started. I guess they take their cards seriously. We quickly moved to a quieter end of the room.

In the corner was one of those jukeboxes that plays CDs. The shiny CDs were displayed in sheets of 8 or 10 in plastic trays, where you can flip through the trays by pressing an outside button. There was a kid, maybe 10 years old, who was just fascinated by this action. He stood in front of that machine and flipped and flipped and flipped. His parents would yell at him to stop, and pretty soon he’d be back over there again. Flip. Flip. Made me laugh.

For dinner Randy and I both had some tasty but puny little sandwiches. The prices and the service left something to be desired, but the Amberbocks more than made up for it.

Rolled back down to the tents, jotted some notes in the journal, and crashed hard. Before doing so, I snapped a couple pictures of my tent in this idyllic spot, and the view from inside. I felt lucky to be here. I felt tired, in minor deficit, but I was loving the ride and felt like we were now on a comfortable schedule to reach somewhere around Ragbrai.