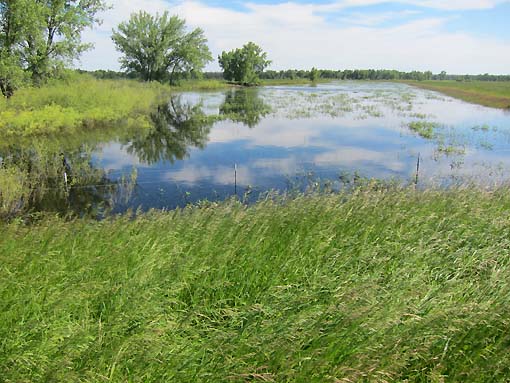 The Harlem MT park was great for a good night’s sleep and the rains did not persist.  It got sort of cold, though, and I started the evening on top of the bag and ended up inside.

Jack and I were the last ones out of camp – how about that – packed up slowly and then hit Deb’s Diner for breakfast.  Jesse and Gary were already there.  A decent dietary start today, with pancakes, eggs, and ham.

Out onto US2, and today the winds were in our favor.  I suppose they helped us make a decision to take Adventure Cycling’s side road route, turning off US2 a few miles past Fort Belknap MT.  It took us on a beautiful CR9, secluded, almost no traffic.  Jack and I were able to easily ride side by side and enjoy the scenery, which was mostly grass lands inundated with brackish flood waters.  We passed a prescribed turn due to a “ROAD CLOSED” sign and instead continued on our way another half mile.  We finally reached a T intersection onto a dirt road.

We basically had 3 options.  1) Turn around and go back 7 miles into the wind to US2, or 2) Turn back and try the closed road on the chance that bicycles could navigate it, or 3) Take a chance on the dirt road headed east.  I guess we felt lucky (punk) because we chose door number 3.   We expected to go only a couple of miles on the dirt before reaching a small town called Savoy, then vector back down ito US2.

The two miles turned into fifteen.   The road got worse, more rutted, softer, sometimes moist, sometimes rocky, often washboarded.   At times we even thought we might be on private property, and since we were on the Fort Belknap Indian Reservation, we didn’t know what kind of justice might prevail.  Fifteen miles on rugged dirt is a long haul on a bike and even tougher on a loaded one.  We occaisonally stopped to check our bearings and our confidence in going on with this pursuit.  At other times, the mosquitoes and gnats got so thick that we had to stop to spit them out.

At one point Jack wiped out, incurring some road rash, a jammed thumb, and a few twisted chain links.  After the repair, I wiped out only a mile further, getting my own dose of road rash and bruising a calf.

But I am dwelling on only the inconvenient part.  The road was a real adventure.  We weren’t exactly sure where it led.  It went off our maps.  We knew we were following the railroad, and eventually the tracks had to go through a town.  We also knew we were headed east because the winds were at our backs.  When we rose up a hill we could sort of follow the Milk River south of us.  We weren’t really lost, were we?

Around a turn a herd of cows and steers occupied our road, and fortunately they did a slow motion stampede as we approached.  In another half mile we ran into a bigger herd that reluctantly trotted to the side as well.  The road got even narrower but still we saw no KEEP OUT signs.

We finally saw evidence of US 2 coming into view to the south of us, eventually found a small connecting route, and finished our wonderful side adventure.   Despite the spills and inconvenience, it was certainly a worthwhile morning.

Back on US2, we started flying along with the wind at our backs, passed through Dodson, MT, and finished the remaining 17 miles in easy fashion.  Tonight we’re in Malta, MT, tenting at the city park.

Jack and I celebrated Malta with lunch and then a milkshake (what else?).   Seven of us (Jack, Frank, Gary, Roger, Bill, L.E., and me) are now lazing around the park, with half of us visiting a nearby pre-wedding party in progress on the grounds.     Jesse elected for a room at a motel here in Malta.

Played and lost a game of H-O-R-S-E with a nice kid named Andrew, who plays on the Malta school basketball team.  We then played Around the World, and I totally had him beat.  All I had to do was sink the final right handed lay-up.  Missed it.  He then sinks 3 shots in a row to win.  Oh well, better to let the locals win, right?

About 52 miles today.  We are now exactly on our original schedule to link up with RAGBRAI.  This schedule includes a few margin days, so I am hoping we can successfully navigate around Minot in some fashion.