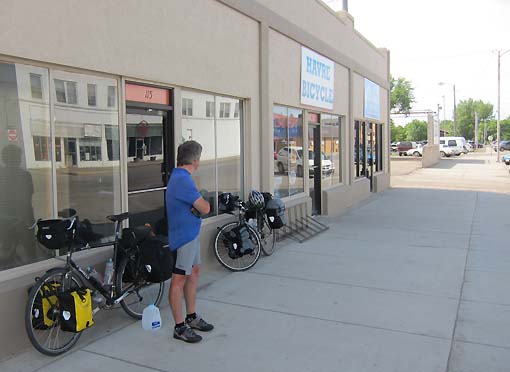 Nice luxurious sleep in Havre MT last night.  A motel room every once in a while does a part-time hobo good.

Continental breakfast in the lobby, then a spin over to the Havre Bicycle shop.  There, we met L.E. seeking out tire tubes.  The OPEN sign was lit but the door locked, with a cell number taped to the window.  L.E. called it and the owner said he was due in traffic court but would slip by beforehand.  He quickly showed up, L.E. got his tubes, and I picked up a bottle of chain lube since I’d been borrowing Jack’s and we were running low.

The owner quickly locked up, and Jack and I rolled off.  I noticed a strange senatation of ventilation.  No helmet!   I left it in the shop!  Sh*t!  We rolled back to the shop and of course found it locked.  I called the owner and left a message for a rescue in case he found a break in the court procecdings.  I then pedaled down the street and went into the Blaine County Courthouse, figuring he’d probably be in some waiting room or something.  I scoured two floors but never found him.

We considered just ditching the helmet, but, aside from the fact that the helmet is rather expensive, it had my (beloved) visor attached.  We sat waiting at the shop door for only 15 minutes when another cyclist approached.  We explained to him that the shop was closed, and he asked us if we wanted anything.  Turns out he was an employee, with keys!  As glitches go, this one turned out very minor.

Off down the road, 20 miles to the town of Chinook MT.  The ride today definitely took more effort since we worked against a headwind.  In Chinook, Jack found a place called The Creamery which immediately called for a large vanilla milkshake.   We met a grandpa there taking his grandkids for ice cream and he talked about area places to see, the flooding, the weather, and the mosquitos.  He told us the worst areas for mosquitoes were east of here between Malta and Saco, right in our pathway for the next few days.

I took a spin around Chinook while Jack headed off east again.  It is a pretty old town with many inactive buildings that are images of the past.  I liked Chinook.

Another 9 miles to a tiny place called Zurich (pronounced Zur-ritch).  L.E. and I stopped at the Spa Bar for a while, but I left him when he got to talking with a pretty girl there.  The winds were picking up considerably, doing maybe 8-10 mph out of the SE and gusting higher.  When I turned around I saw a big line of thunderheads forming, which lent a small urgency to my pedaling.  I really didn’t want to be trying to set up my tent in the wind and rain.

Twelve more miles to Harlem, MT, tonight’s destination.  I also caught up with Jack, and we both rolled into town and found the rest of guys already set up next to the city hall.  There was even a sign that proclaimed, “Bicyclists Camp Here.”    The yard wasn’t very big, so having nine tents crammed together was quite a sight (our seven, plus L.E.’s, plus one other touring cyclist).

It’s fair to mention that there does not seem to be so many mosquitoes here.  But they’ve been replaced with a frenzy of gnats, who are particularly attracted to our sweaty brows.

Jack and I considered dinner spots, but settled on a trip to Albertson’s for snacks and drink, and then yet another milkshake at a tiny coffee place.  She made mine with espresso and extra thick so I could eat it with a spoon.  Yum!  A day for junk food.

L.E. went for a swim in the public pool and was swarmed by the local gang of guys aged 11-14.  He ended up doing canopeners with them off the board, and then breathholding contests, which he won easily.  Cycling is very good for old cardiovascular…

L.E. and I then hit a local bar for a beer (couldn’t get anyone else to go).  VERY local place with friendly bartender lady and one patron, a real friendly drunk Indian guy.  Trying desperately not to drink anything Budweiser, I ended up with a can of Ranier Beer, which was pretty cheap, smooth, and enjoyable.   After a half hour, the bartender came up and said, “It’s getting windy out there.”

Holy cow, an understatement. The winds were whipping with the storm coming up fast.  I downed the beer I’d been nursing  and then had to hold my baseball cap on my head as we ran back to the tents.  Both ours were still there flapping and the rains were just starting.  I ducked in, realized I’d better pee, then ran back out to find the restroom.  I opened the door to a nearby building a found Frank and Jesse waiting out the storm inside.

So, here I sit again in my tent with my pannier desk and my netbook, rains pattering away, occasional thunder and lightning, and the gusty winds making the walls of my tent puff in and out.  It was certainly another interesting day on tour.  Our first day with headwinds, but not too bad, and relatively short at 44 miles.   Forecast calls for tailwinds tomorrow, so we’ll hope to reach Malta easily and consider our options.