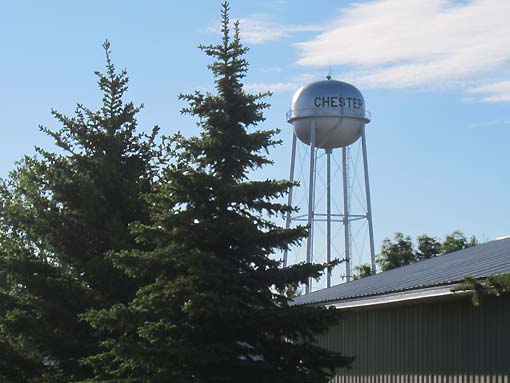 Here in Chester, MT the five rose early and left the park, almost before the two could open their eyes.  Still, Jack and I were motivated to pack up prior to a 9:00AM sprinkling from the park watering system.

We returned to Spud’s Café to find the same server, Kimmie, taking orders.  She alone was running the entire place and in stellar fashion, cooking and serving orders quickly and never letting anyone’s coffee get low.   I got one of the biggest and BEST pancakes on the tour so far, light and cakey and huge.  And I’ve had pancakes almost every morning.

We stopped at the supermarket and picked up another can of Off!  A large supply of this stuff is the price of passage through these parts, at least at this time of year.   Once out of town, the biters got quite bad again, attacking us even as we rode, and it actually took several “layers” of Off! to finally do the trick.

We took the turnoff to Joplin to cruise around the town and found L.E. just leaving.  I think it is cool the way touring cyclists traveling in the same direction seem to meet up so often without plans.  L.E. had gone to the family’s kegger/kickball party last night and gotten some cool photos.  But I’d give Chester a mucher better score as a place to stay.

We finally reached Hingham, MT and stopped at Spencer’s Hi-Way Bar.  A couple of days ago I’d approached a westbound touring cyclist headed for Anacortes, then heading south into Oregon and California.  We’d chatted for a while, and he handed me a free drink token to Spencer’s.  The owner asked where we’d gotten it and thought it was pretty cool that bicyclists had exchanged it.   After our free drinks, he gave us a second token for a bar 20 miles down the road.

Another long roll through the wide open prarie, stopping occasionally to rest the knees or take a drink of water.  We finally reached Fresno Dam Road and Blackie’s Walleye Bar to redeem our 2nd token, and found Jesse and Gary perched at the bar.   The proprietors were real friendly and gave us yet a 3rd token for a bar in Havre.  Despite the fact I hadn’t eaten much I couldn’t resist a draft Amberbock, which tasted like heaven and went right to my head.

The three of us took off down US2.  The beer had given me some quick energy which lasted about 10 minutes, after which I started feeling real sleepy and had to pull over.  Moral: beer is not very good cycling fuel (but very fine for afterwards).

When we reached Havre, Jack and I took a room at the Town House Inn, wanting showers and some good wi-fi.  Jesse found a motel further east, Roger found a place out of town, and the others hit a Havre RV park.  Dinner for us at a tasty Mexican place downtown called Guadalajara’s, including a nice walk to and from in the early evening.

62 miles  today,  1245 miles so far on tour.  Jack and I considered a full rest day here in Havre tomorrow, to rest and to do some laundry and visit the bike shop.  But we’re now doing laundry at the motel, and so will plan to hit the bike shop in the morning and then ride a short day tomorrow.

I got an email response from the South Dakota DOT today advising that our planned route through the state is clear from flood waters, which is really good news.   We continue to have some concern about eastern MT and northern ND, especially since my father-in-law told me that evacuations are happening in Minot.