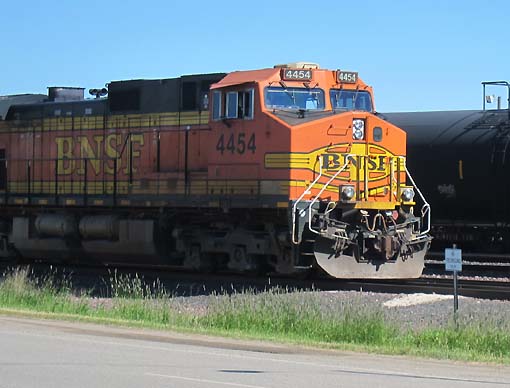 This is our 22nd day on tour, and so marks the beginning of our fourth week.  The weather today was beautiful for our relatively short ride from Shelby MT to Chester MT.

Jack and I rose late as usual, then made our way to a pancake breakfast with Jesse at the Town Pump restaurant, a place set up for the Interstate 15 traffic.

I rode almost the entire day with the touring cyclist we’d met last night named L.E.  I learned that he’d lived in many places, grew up in Miami, spent the last few years on the Big Island in Hawaii.  He is a real talker so we covered many areas and philosophies of life as we pedaled along the vast flat stretches of green grasses.

Last night Roger sort of joked that we needed to have a scavenger hunt today to see who could find the prettiest bird feather.  I ended up spying a number of dead sources and finally plucked a striped sample off a meadowlark.  L.E. and I cracked up a bunch performing this silly task.

We stopped a lot and rode nice and slow.  One stop happened in Galata MT where I went inside an agricultural trucker gas station for a Coke.  L.E. started talking to a guy standing on top of an oil truck, then started taking photos of the guy and asking him his name.   Pretty soon the guy had invited us to a kegger party in nearby Joplin, although we probably weren’t going that far today.

We reached Chester and met the gang clumped at the library getting a wi-fi fix.  Bill and Frank had been there for more than 5 hours.  Man!  What’s the hurry?  But I know that their legs just want to turn the cranks that fast, despite the lack of a need for it.  I am calling them the “thoroughbreds.”

Late lunch at Spud’s Café, a spin to the city park, a trip to the supermarket.  My last trip was to the local bar/casino for a cold beer.  Of course, in my yellow cycling jersey and black leg tights (think long johns) I’m sure I was an unusual sight in the bar.  I picked out a “Pig’s Ass” brand beer made in nearby Belt, MT, which turned out to be delicious stuff.  While I stood there, I heard a voice from a filled corner of the bar call out, “You bicycling?”  I nodded and he says, “You guys use special maps for that, right?”  I nod again.  And he says, “What do those maps have on them?”

I go outside and fetch a map so he can see, bring it back in, and show it to him.  He says, “You know, I grew up in Lothair.  What’s this little envelope symbol mean beside it on the map?”  So I deadpan, “That means there’s nothing there.”  This cracks up his buddies, who all call out, “That’s for damn sure!”  [The envelope symbol alone indicates there is a post office but no other services of interest to cyclists.]

Beer and nibbles for dinner back at the park.  My bird feather was the only entry in the scavenger hunt, and so I rightfully claimed the daily honor.  I must mention this because even Roger failed to produce an entry, but alas, there is always tomorrow.

A lady dropped over to invite us to a museum presentation but only Gary went.  Then a Chester resident dropped over with his great-looking recumbent tandem to let us try it out.  Gary and Bill took a spin around the block on it and did quite well.

Roger noted that today is June 21, the summer stolsice, and it was a shame that Team RA wasn’t celebrating in some fashion.  So we cranked up Utopia’s “Ra, Communion With The Sun” on my little netbook and sat around a table ceremoniously listening to it.  OK, not all that much ceremony to it, but it’s the best we could do.

51 miles today, certainly a decent riding day.  The terrain has become much less featured (but with dynamite endless views) and so I enjoyed riding and talking with L.E. today.  And I’ll stop making references to my knees since I am thinking they’re on the mend now.  Whew!   Tomorrow we’re off to Havre, where we’re considering a rest day, unless the winds convince us otherwise.

One thought on “RA22: Summer Solstice”