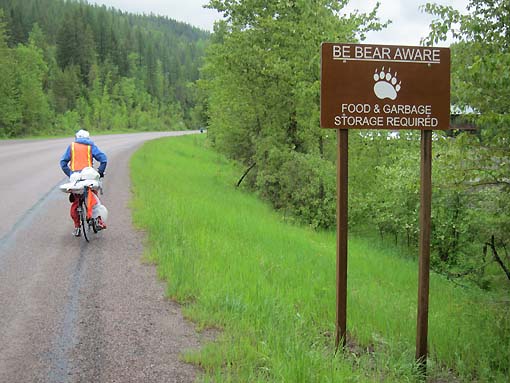 Nice late morning and a good breakfast of French toast and eggs in Columbia Falls.   Jesse, Jack, Roger and I then started a slow roll up SR486 north out of town.  Roger rolls along fairly slowly on his cobbled Huffy and I was very glad to keep pace with him, make conversation, and manage my sour knee.

Roger told me a handful of great stories about past touring experiences he’d had.  One involved an extraordinary 40 minute encounter with 2 mountain lions while he was camping alone.   That would have scared me to the bone – I’ve heard that mountain lions can fearlessly attack even a grown man.  We spent the ride looking for bears as well since we’d heard it would be likely to see one here, but to no avail.

Turning east onto Blankenship Road, we spied smoke and found people around an awning and grills fired up.  Some kind of picnic in progress.   We slowed as we passed checking it out, and finally someone called out, “Come back and have some food!”  You can bet Jack, Roger and I went back (Jesse had already passed).

The picnic turned out to be an annual bash held by the Blankenship Rural Fire Department.  We met the apparent hosts Peter and Edwinna and at least a half a dozen other volunteers, conversed for over an hour, and enjoyed some extra tasty hamburgers with fresh tomatoes.   It was very special talking to these people, so friendly and generous.  We talked especially of critters, elk, moose, bears, mountain lions, and various encounters they’d seen or heard of.  I also learned that the fire department covered a very large section of land from halfway to Columbia Falls just about up to Canada, and did about 30 runs a year, mostly medical.

Before I left, I sliced of a big piece of ultra rich 4-layer chocolate cake – oh my, what glorious calories.  The food was really good but I had a hard time eating enough because of all the conversation.  They wanted to know all about our trip, our equipment, how and where we spent evenings, our tribulations in the rain, etc.   Jack was similarly engaged in talk.  When I found Roger, he was sitting at a table with a plate full of food and big smile on his face, talking with a Harley guy.

They lined us up for a photo with our bikes and asked our names.  I’m guessing we might end up in a newsletter or something.  They told me they see lots of bicyclists (since they’re on the national Northern Tier route) and so they try to grab one or two each year during their annual picnic.  Our very lucky day!!!  On down the road, we proclaimed it the mother of all stops.

The rains started down as soon as we left the fire station.  Blankenship Road turned to muddy gravel for 5 miles or so, and I particularly looked for bears – it seemed like a great place for it – but found none.

We hit US2, went the wrong direction, then backtracked to finally find the Glacier Campground.  Four of the guys had spent the evening here last night and then spent a rest day here today.  The campground had great little cabins for only $45 so Jack, Jesse, and I shared one.  The ongoing spell of cold and rain created large numbers of vacancies at the campground so in a way it helped us get a place.

Jesse bought some firewood and soon we had a nice blaze going.  A rare ray of sun managed to catch our cabin porch, and Jack almost immediately passed out while I just lay there sucking down a Pepsi with a nice bag of ice on my knee.

Frank and Bill returned from an out-and-back into Glacier National Park and I don’t think I’ve seen Frank with a bigger smile on his face.   They both rode nearly to the top of Logan Pass, the last 18 miles in a closed-off section barely wide enough for their bikes.  At the top there was ice on the road and huge walls of snow, even more than we saw on Washington Pass in the Cascades.  Frank got a nice picture of a bear, too – be sure to check out his blog.

Dinner at the grill at the campsite.  A dandy chef must have been in charge because the menu was downright highbrow for a campsite.  But it sure was cold to sit there, and we were the only patrons.

An extended family from Great Falls MT was sharing cabins in our clearing and soon we had a regular gathering going on, everyone meeting everyone else, and the fire got stoked up hot.  Real nice folks, we talked for hours all about their state and the guy’s business as a concessionaire at annual events, particularly Indian Pow Wows.  Two twin boys were running around with toy trucks and the girls made s’mores.

Practically a rest day with only 22 miles.  The excitement over Frank and Bill’s ride into the park caused us to decide that, if the weather is nice tomorrow (and the clouds lift a bit), we’ll take another rest day here for others to ride into the park if they want.  And if the weather is poor, we’ll head onward east.  Oh yeah, the daily knee report:  Still not good, even with the past three light days.  I got 7 regular smooth miles out of it today before it started whining.  I’ve been reading as much as I can online but I’ve also decided I’ll contact a sports medicine guy if it can be set up.