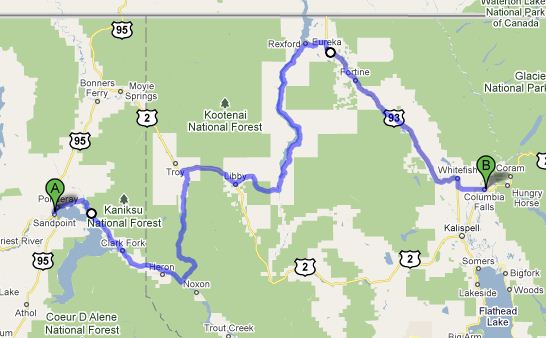 At our remote campsite south of Stryker, MT it rained almost all night.  Before midnight, I was suddenly awakened and immediately thought, Wo! A bear has gotten our food!  But it was only a big RV trailer that had pulled in to our camp clearing, saw us already occupying it, and then had a hard time turning their beastly hardware around.   They even managed to knock over Gary’s bike in the process.

The rains finally stopped in the morning so we took the opportunity to pack up.  But man it was cold!  That wet cold that permeates into the bones.  I had to look down to make sure my toes were still there.

Of course, when Jack and I took off, it started to rain again.  We rode 7 miles south to Olney where we took a detour to find the tiny town’s main street next to the railroad tracks.  One tiny store – hot coffee and hot chocolate – just what we needed!

From there it was mostly flat and mostly downhill to Whitefish, where we stopped for lunch at a place called Swift Creek Café.  All our fingers and toes really appreciated the stop in the warm restaurant.  We then hit up a bike shop across the street and Jack scored some shoes covers, warmer socks, and a tube.    The lady proprietor was a former board member of Adventure Cycling Association and asked how we were liking their maps.  We provided both positive and negative comments, which she did not seem to receive too well.

The RA group was stretched out for miles, all the way from Whitefish to east of Columbia Falls.  Jesse rejoined the group yet again, having ridden up through Kalispell.   By phone, we regrouped and decided to meet at the KOA in West Glacier.

Jack and I rode to Columbia Falls and found Jesse still in his motel room at the Glacier Inn.  Roger was with him and they were watching Tin Cup.  We were all soon transfixed on it so after a while Jack and I decided to spend the night here.  Independence reigns.  Gary, Frank, and Bill were already up at West Glacier, not at the KOA but at a different campsite, and would plan to stay put and meet us tomorrow.  It would be no stretch to call this a “loosely cohesive group.”

A filling dinner at Pizza Hut, then back to the room for blogging and relaxation.  I was really looking forward to icing my knee, and grabbed a bag from the office.  It seemed to really work well, so about 10:30PM, I went to get another bag, but the office was closed and no one would answer the door or the phone.  I’m rather steamed about this – this is one of my few opportunities to conveniently apply ice.  Oh well.

Only about 37 miles today.  It sure was a cold one for most of it.  Knees did pretty well for the first 20 miles, then degraded into aches again.  I say knees, but actually it is only one knee that is bugging me.  Rest (and ice) might help a lot, and I may have to resort to that.  But I will plan to ride a short day tomorrow and see where things stand.   If the sun would come out, that might be good therapy too.

Still, we remain ahead of our schedule.  Here in Columbia Falls, MT we are literally at the foot of the Rockies (we could see them if the clouds would only lift).  The general plan calls for us to cross the Divide and reach Cut Bank, MT on Tuesday, which should be doable.  If you’re wondering why we’re still in western Montana, all you have to do is look at the route we’ve taken.  We’ve progressed about 110 miles eastward from Sandpoint ID, but ridden over 230 miles to do it, of course seeing some beautiful country along the way.