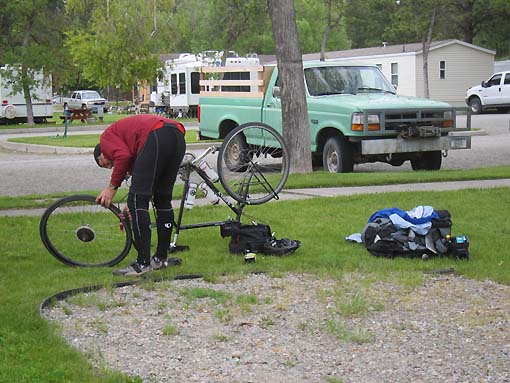 I’d love to carry on about another fantastic day on tour.  But, no can do.

Evening in the crowded RV park in Rexford, MT was not as bad as I might have guessed.  A few drunken patrons leaving the bar, but my earplugs and fatigue attenuated anything else.

As usual Jack and I arose late and then lingered.  The team headed out onto the road and Frank even decided to reverse course for a while to see if he’d run into Bill and Roger.  Jack decided to get RA flat #3 before even heading out today.  Then happily over to the restaurant for breakfast.  My one pancake, the size of an entire plate, had some really good maple-y syrup.

We hit the road about 11AM and the rains started down on us.  These weren’t sporadic showers, but rather a steady beat that brought the clouds low and turned the skies completely cloudy and gray, with temperatures down in the 50s.  This pretty much obscured the expansive views because the clouds covered everything, and our riding was a little bit more of a chore.  Our route took us through Eureka, MT and then included a stretch south on US93 which was not a very good road for cycling (70 mph trucks and cars and no decent shoulder).

To add salt to the wound, my knees barked at me all day, so I had to plug along around 7-8 mph, stopping frequently, and easing off the pressure at every opportunity.  I’ve been playing around with every degree of freedom I can think of to solve this knee problem (seat height and angle, cleat position and rotation, use of shoe inserts, pedaling technique, etc., etc.) with no immediate solution.  It’s also possible that simply the weight of the bike isn’t agreeing with my knees and that perhaps I’ve pushed too hard the 1st two weeks.  If that’s the case, I ought to be able to rest on or off the bike for a couple of days and hopefully things will improve.

I passed by an osprey nest and stopped to listen to the bird chip at me.  He finally made a couple of circles over my head then landed back on his perch.

The whole team (minus Jesse) briefly met in Fortine, MT at a convenience store, then spread out again down the road.  Our agreed upon destination was the Spring Creek Campground, but when we arrived it was unmarked.  Bill and Roger took off further down US93 to explore while Gary hailed down Jack and me as we caught up.

We headed down the unmarked road and indeed found a campsite, but it had been abandoned for quite a while.  Rotting picnic tables still present, no signage, a sort of decrepit outhouse, no water.  Roger joined us and we all decided to tent here – the price was $0 pp.  The rains and temperature continued to fall and it was 6PM already, and we all had plenty of food and water.  Incidentally, Frank decided to continue riding south on to Whitefish presumably in search of less primitive lodging.

Jack finally reached Bill on the cell phone.  He’d ridden 6 miles further to Olney and found a better camping spot, but since we were already set up Bill decided to pedal back (uphill) to us.  Bill is one strong rider, the strongest in our tour.

We waited for Bill and ate, and it started getting really cold.  No colder than some other evenings but the rains started putting me into hypothermia.  Bill finally came, set up, and added his surplus food to our collected stash.  Then up a tree it all went.  Unfortunately it was difficult to find a suitable branch in this forest, being full of spruce trees, but we managed.  A tall bear will still get a feast, and so will a squirrel.  A hundred yards away from us, at least.

There is a surging stream right next to us.  Roger has been kidding all evening that the water is rising and that my tent (or his tent) will be the first to get flooded.

I was freezing cold when I finally got into my tent for good, but the air in the tent is definitely warmer and my fingers are now loosening up enough to type.  It continues to rain, so you can just imagine the soothing sounds of the drops on the tent fabric, and the roar of the nearby stream.  Despite its primitive nature (and the weather), this campsite is pretty cool, much more what I consider to be a campsite.  Eye of the beholder I guess.

Thankfully, a short day, only 36 miles.  If you look on a map, our campsite is about 6 miles south of Stryker, MT on US93.  Destination tomorrow is West Glacier, on the boundary of Glacier National Park.  We already know the road through the park remains closed, so we’ll be heading south around the park, and then be making some decisions on routes and the use of extra days.  We’ve heard there is lots of flooding in the Dakotas, especially SD, and so those extra days might be needed in order to link up with Ragbrai.