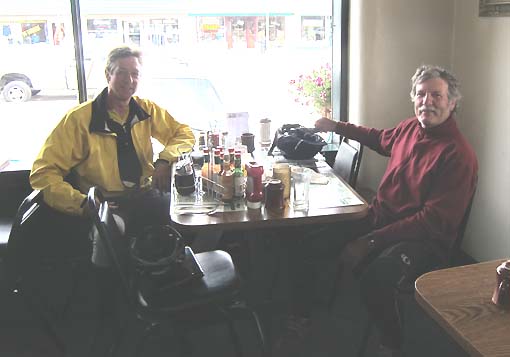 Jack and I already had breakfast staked out at the Libby Café and made a direct run there this morning.  It was kind of a touristy place but the service real friendly and food decent.   As usual, the gang headed out quite early and we started at least two hours behind them.   But, the way Jack and I figure, since the plan is only to ride 47 miles, and we have all day to do it, then we might as well spread things out.

Everything about the skies told us rain today, so we wrapped up accordingly.  Our route took us  east and then north into some very remote areas along the Kootenai River.  (By the way, Jesse decided on an alternate route through Kalispell and departed with us for a few days.)  We passed the Libby Dam, and Jack and I rolled down to the observation deck for a look.  We spied at least three bald eagles swooping around above the downriver side of the dam.

Libby Dam creates the Koocanusa Lake.  It took me a while, but I’m guessing that that word is a composite of Kootenai, Canada, and USA .  If you look on the map, it is a huge north-south lake stetching many miles on both sides of the border.

Miraculously, we managed to dodge the rain the entire day.  As usual the scenery along the way was stupendous.  At one stop, Jack turned to me and said, “You know, this is just another stunning view.  And I’m not even going to get my camera out.”   I snapped a few here nad there, but the bar gets pretty high after a while.

We spied a towering column of smoke from a couple of miles and approached it wondering what it was.  Forest fire? Boat fire?  Car-be-cue?  We finally reached it to find a huge pile of bark and branches roaring in flame and no one around attending it.  It had already scortched a nearby tree and lit numerous child fires, but the forest was so moist there seemed little danger.  We considered calling it in, but noticed that the few passing cars also paid little mind.  A mile down the road we saw logging activity and figured they must be “managing “it.

We finally reached our campsite at the Peck Gulch campground.  My knees were whining and I was glad we were stopping.  But we found and read a note there that indicated to both of us that our four amigos had gone on to Rexford to a better campsite which had showers and was only $5.  Sixteen more miles, sixteen frickin’ more miles.  These were hilly miles and my knees were not happy.  We considered staying but decided we’d make an attempt at keeping the group together so off we went for another 16 miles.

In Rexford, I spied a beautiful campground before town and hoped we’d be staying there.  Instead, we found our guys at a very crowded RV park, chosen because it had showers.  Man!  I am not a fan of RV parks for camping.  Too many neighbors, too many late night sounds, generator noises, ultra hard ground, etc.  And this one was right next to a bar.  Additionally, it turned out that two of our guys (Bill and Roger) had actually camped back at the original campsite, and we’d both misunderstood the note.

Ah well, it is folly to expect a herd of seven touring cyclists to stay on the same page, nor should that be a goal.  Let independence reign.  Due to the various tastes and riding styles on our team, I fully expect some dissolution along the way.  See you all in Ragbrai I hope!

Jack and I set up our tents (ever prepared for more rain) and then hit the bar, and I finally enjoyed my first Moose Drool, a beer that Gary had been endorsing for at least a couple of months.  I had the dark version and it was EXCELLENT stuff.   Dinner of massive quantities of PB&J, then lights out for me, because the temperature dropped quickly into the 40s and the rains started.  I drifted off wondering what kind of rowdy bar crowd we might have to endure.

64 miles today, with knees moaning – dammit.   I learned that Motrin works well – too well because it masks the problem and it is only worse later.  I will be very judicious using it, and otherwise continue to go easy and experiment with bike fit.