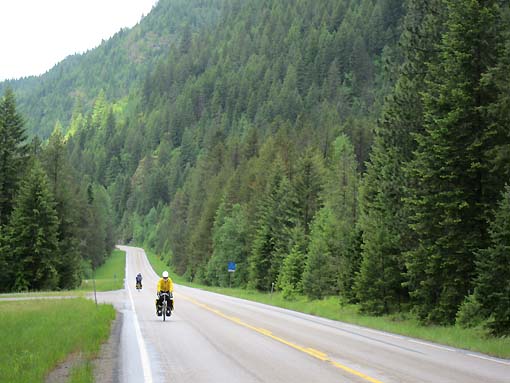 It rained all night at Cabinet Gorge RV Park, which I sorta liked from a sleeping point of view.  Fortunately it let up enough to allow us to pack up in the morning, albeit with wet gear stowed in the panniers.

In short order, Jesse caught up with us, again.  He’d spent last night in Clark Fork since the forecast had called for rain yesterday afernoon and last night, which was mostly correct, then he’d risen early and pedalled the 16 miles to our camp.  Independence reigns on this tour – for better and worse that philosophy is serving us.

SR56 took us north following the Bull River.  There was plenty of climbing of smallish hills, but the total climbing for the day added up quickly to something over 2000 ft.  Scenery was stunning, as usual.  I am running out of words for it – stunning, magnificent, gorgeous, beautiful.  But I keep taking pictures of snow-capped mountains, lush meadows and wetlands vibrant with new green growth, amazing cascades of water…

Jesse and I lagged well behind since he decided to index his derailleur just off the road.  He reasoned, why should I wait until camp when I can just do it here in this outdoor splendor?

He and I then went to the Halfway House Bar for a lunch sandwich.  The place was really great, with that perfect friendly-bar-type ambience.  The proprietor was especially welcoming to us cyclists and she fixed us some excellent eats.  We learned that she is a foodie and watches The Food Channel, and was excited that Linda and Janel had met Mr. Bourdain.

We hit SR2 and headed east, following the Kootenai River, and eventually reached the viewpoint for Kootenai Falls.  It was a half mile hike back into the woods, but the falls, and the tremendous amount of water flowing over it were worth the trek.  Have I mentioned that there are huge amnounts of water everywhere up here?  This transplanted desert boy is amazed.

A few more miles and we reached Libby, MT and our camp at the Two Bit RV Park.  The guys seem to prefer RV parks because they usually provide showers, but they’re also more expensive.  Still, the fee is rarely above $25, split 5 to 7 ways.

Dinner, then a team meeting to discuss the next few days’ route and schedule.   We are anticipating that the road through Glacier National Park will be closed when we get there, but Frank suggested that we consider taking a dedicated day to ride around the open portions of the park.  Everyone liked this idea, so we will see how it plays out in the next few days.

51 miles and another absolutely wonderful day on the road.  I know it is boring to talk about my poor knees, but they did not perform well today.  It is a little frustrating to have lots of energy, plenty of muscle and conditioning, but still ride in pain due to “linkage” issues.  The gang had a mini-conference on my behalf after dinner to brainstorm, do some measurements, and check some of my bike hardware out.  I thoroughly appreciated their attention to it as I need to reach a remedy.