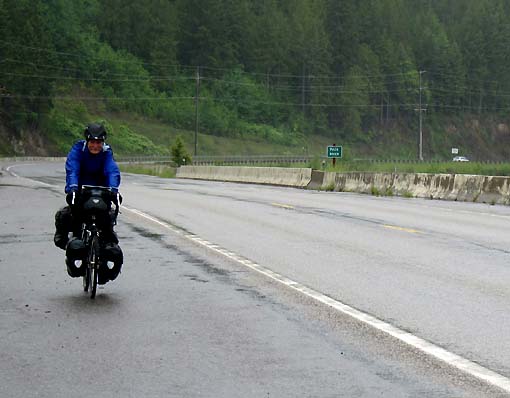 Leaving from Sandpoint this morning, I was almost reluctant.  The knee pain I’d experienced Saturday was disconcerting.  If unremedied it could jeopardize the tour for me.  I’ve come to the conclusion that my bicycle frame is too small for me (I’m 6’3” and my frame is 58cm, although you can’t tell everything from just that).  It’s taken me about 6,000 miles to decide that.  Last night I pushed the seat aft as far as possible and raised the seat height just a little more (which also moves it aft).

It was already raining when we left the motel.  We stopped for a good pancake and egg breakfast at Connie’s Café, and then ran by the post office where I sent a few items I wasn’t using home (e-reader, cards, shower shoes, a redundant multi-tool, and some clothing items).  The weight savings was probably 3-4 pounds, not bad, but it also serves to reduce the clutter in the panniers.

Jack and I took off out of town on US95, and then east on SR200.   We both took it real easy, spinning lightly and gearing down on the hills.    With temps in the high 40s to mid-50s, the rains continued steadily, sometimes a light shower and sometimes beating on us.  It certainly was a good test for our rain gear.  My Rain Legs work great – beneath them I simply wore spandex tights.  Legs stay dry and not sweaty at all.    Likewise, the Louis Garneau shoe covers are excellent – my shoes and socks stayed fully dry except for sweat.  The Specialized Radiant gloves are definitely NOT waterproof as advertised, but do mostly keep the water off your hands.  What you end up with is moist clammy hands.

Our route took us along the Pend Oreille River again, this time heading towards its headwaters.  The streams and creeks feeding it were simply magnificent, with water flows so high I could hardly believe it.  Huge wide channels of water seething by.   Jack and I stopped for a few photos but the gray skies and rain didn’t encourage them.

28 miles to Clark Fork, ID and we stopped for provisions.  Once again, we’d be staying at a remote campground tonight and had to pack in food.  First we wanted a bite to eat and milled around town, selecting a café.  When we pulled up our bikes, only then did we notice that 4 other bikes were parked outside – the gang!

After lunch, Jack and I scored a fresh baked loaf of honey oat bread and a few other provisions for a PB&J dinner, plus some pastries for breakfast.  For our remaining ride, the skies took a breather, and even offered a ray or two of sunshine.   The terrain got more lovely as well, more remote, more hilly, but a beautiful ride.

We stopped at one viewpoint to see large amounts of snow drifting by in the river.  Snow-bergs?  We then thought maybe we were looking at foam.  But it was hard to tell.  One motorist there said you could tell the river was still rising because you could see that it was higher in the middle than it was on the sides.  Wah?

A few miles further, views at the Cabinet Gorge Dam were breathtaking.  It seemed like the entire contents of the river was pouring over the spillways.  It seems most likely now that we were looking at foam (downstream) caused by this massive turbulence.

Another half mile down the road, and, drumroll…another new state: Montana!  Jack and I dutifully dismounted and set up our timer shot.  Jack even used a portable tripod for his camera.   We might as well celebrate now because Montana is so big we’ll probably be here for a couple of years.

Another 15 miles or so brought many awe-inspiring images of low fluffy white clouds moving passively through slopes of tall pines.   Majestic quiet beauty.  These lands are a national treasure.

On into camp.  The gang ahead of us selected the Cabinet Gorge RV Park because it had nice bathrooms, water, and showers.  $25 for all of us, so only about $5 a piece.  We can live with those rates.  Jack and I set up, explored, swatted mosquitos, and ate.  The PB&J on that fresh bread was truly heavenly.  We’d had the bakery slice it in, like, 1” slices so the sandwiches were especially great.

And then?  Well, you know.  The skies opened up on us.  Dumped!  We’re getting wiser about such things, though, and everyone was all ready to duck into their respective tents with minimal intrusion of water.  So once again, here I sit, with netbook set up on my “desk” (a pannier), listening to the hypnotizing surround-sound of raindrops on my tent, happy, warm, well-fed, and dry.  Still, big thunder in the distance…

Only 48 miles today.  I do love it when we have all day to ride only 48 miles.  Knees murmured to me, but at least were quieter than Saturday.

Well, the independence aspect of our riding got tested tonight.  Roger had taken off early this morning and no one had seen him all day.  When he didn’t show up in our camp, we called and left a message on where we were.  We figured either he’d already found a free spot somewhere or simply didn’t have phone service.  At 9:30PM tonight he showed up after over 90 miles of riding!  Seems he’d made a navigational error, but eventually retraced back to the originally selected campsite, only to find us not there.  Fortunately, he reasoned out where we were by process of elimination and is now setting up, in the rain.  We will take steps to prevent this sort of thing in the future.