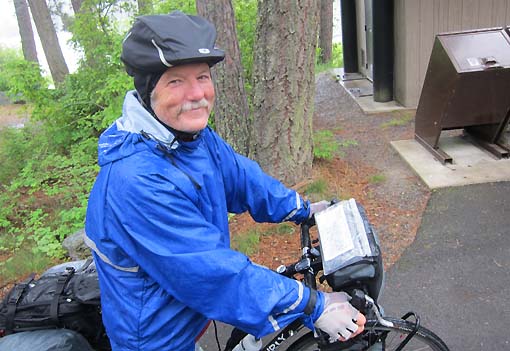 It rained all night at the Panhandle Campground.  The four amigos Frank, Gary, Roger, and Bill all arose early, well before 7AM.   I lay there in my cold tent, comfortable in my warm sleeping bag, trying repeatedly to sit up and force on a shirt.

By the time I actually emerged, most of their tents were down.  Frank discovered a small flood in his, something to do with puddling in its footprint.  Bill discovered that a rodent had gnawed through a bag during the night and nibbled some of his food. The rains had practically stopped, giving the mosquistoes again a chance to feed.

But I was glad to be here.  This is a remote campsite, snuggled up next to the Idaho panhandle (hence the name).  If you look at the route we took to get here (through Ione) you can see that we went pretty well out of our way.  Fortunately no big critters last night around camp, but after seeing that moose yesterday I’m thinking most anything is possible.

Jack finally emerged, and later told me he only did because he heard the five of us conversing, and that was the only reason.  The four pedalled off, and as usual Jack and I lingered, eating some breakfast pastries, checking the river bank, and spying a beautiful noisy jay (called a stellar’s jay).

Just as the last pannier was attached, the skies opened up again and on went the rain gear.  We rode our first 8 miles in an wonderful downpour, which stopped and then started again between miles 12 and 15 or so.  LeClerc Road runs N-S on the east side of the Pend Oreille River and is very isolated and beautiful.  The terrain is much different than the mountain passes we’ve been doing, mostly flat, with just a few small hills here and there.  Due to the cold, the rain, or maybe the terrain change, my knees started howling at me, and so I stopped frequently to adjust seat height and to otherwise give them frequent rests.

Approaching Newport, I stopped to admire a group of cedar waxwings just off the roadside.  It is only the 3rd time in my life to see them, once in Pennsylvania, once in Mississippi, and now once in Washington.  They must get around.

In Newport, we stopped at a convenience store, and finally learned that the Pend Oreille river is pronounced “Pond-eh-ray”.  I suppose that accounts for the nearby town of Ponderay and various businesses sporting the same name.   One couple we talked to suggested the Riverbank restaurant as being good so we took up a windowside table for lunch.  Actually, only Jack had lunch, as I ordered eggs and pancakes.  They make their pancakes big up here.

Then back on the road, which took us through town.  The waitress had told us that we were already in Idaho, and that the line was a stoplight up the street.  We went up there looking for a sign but found none, and so started our exit out of town.  When we finally did come across the state line sign, we knew what we had to do.  I set up my bike as a tripod across a wide angled intersection, then started fiddling with camera settings to get a self-timer shot.  For some reason, I could only get it to give me ten seconds, barely enough time to get across the intersection, and so the photo shows us JUST turning around for the camera.

This is Jack running away from his camera (sitting on my bike seat), also with only a 10 second timer.

We took a pretty swing south of the highway on another AC route, some 30 miles or so through ranches and homesteads.  Not too eventful, full of beautiful scenery.  I almost lost my helmet cover again.  Knees continued to bother me but got a little better.

Through tiny Algoma and Sagle, and then north on a bicycle trail to Sandpoint.  The hilly trail seemed to lead Jack’s knees into the same achy zone as mine.  We crossed Lake Pend Oreille on a long and very nice bridge, one that had an entire two lane wide causeway dedicated to bicycles and pedestrians.

Into town, we spied a Best Western and made a beeline.  The others found an RV spot for tenting for $40, but we didn’t feel too bad for splurging for the motel for a planned rest day tomorrow.  Like every rider on the tour, I think you’ve got to ride it (and lodge it) the way you want to.

Shower, then a walk into town to explore.  We ran into the gang returning to camp, then scored a couple of pizzas and drinks at the Loading Dock, a riverside eatery.  Finished the evening chewing pizza, sipping on beer, and watching the river go by…well maybe not sipping.

69 miles today, with knees twinging.  A rest day is definitely needed.  So far we’ve covered 737 miles in 12 days, and are exactly on our originally planned schedule to link up with this year’s RAGBRAI.  That schedule includes anywhere from 4 to 8 “margin” days so we’ll need to be thinking about how to manage them.

BTW we talked with Jesse throughout the day and learned that he made it all the way to Newport today, covering some 83 miles and taking more direct routes where possible.  This makes it probable that he’ll catch us soon.