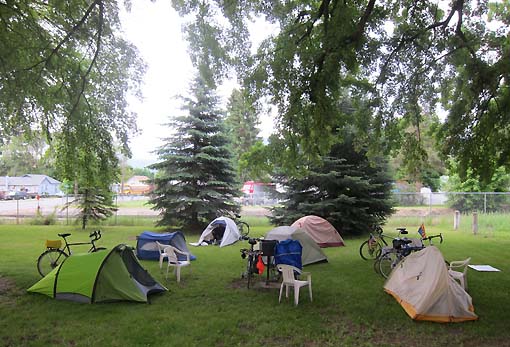 The campsite here in Kettle Falls turned out to be a good one for a city park.  No late night local games or mischief, and it even had wi-fi service! I heard the train alarm go off twice last night but it hardly woke me, with earplugs in place.  Lkewise, I knew that our team probably put on a small concert of snoring, including me, but the earplugs are the ticket.

The gang pulled out early and Jack and I lingered as usual.  We eventually packed up and found a nearby restaurant for breakfast.  They served some really good plate-sized pancakes.

We took the AC (Adventure Cycling) route out of Kettle Falls, a side road that was pastoral and more hilly than the state highway.  The AC routes often give a taste of the rural homesteads, but are also often tougher on the legs, and they typically add miles, too.

Into Colville, and we ran into the gang just leaving town.  They pointed us (in opposite directions) to the Safeway, and we eventually found it to buy some lunch provisions.  We again took the AC route out of Colville and paid a bigger price – some really steep climbs.  Same deal, though – it gave a taste of the local neighborhoods, farms, and ranches.

After the past four days of mountain passes, we expected a slightly easier ride today.  We didn’t really get it.  The steep climbing out of Colville, then some 30 miles of slopes and hills that elevated us over the Selkirk Mountain range.   On paper this climbing doesn’t look too difficult but it took a toll, probably more so because we weren’t expecting it.

Jack and I stopped often, checking out nature, scenic spots, waterfalls, etc.  The temperatures got quite cold and we did repeated wardrobe changes, too.   The climb flattened out for 15 miles or more through a resort area with tall pines and mountain lakes.

It was in this climbing stretch where I passed by a narrow clearing in the pines, and it took about 100 yards for the image to register.  I turned around and retreated, then slowly came up upon the  opening again.  A moose!  Thidwick!  This one had no antlers, and it was half submerged in a bog.  No sooner had my hand gone to my camera pocket when s/he turned and looked up at me (in my bright red jersey), jumped, and with ponderous effort lurched out of my view (sorry – no photo).  I’m not sure if “lurching” and “ponderously” are even compatible, but that’s what it was.  I stood amazed and listened to large movements through the water.   Jack came up and we continued to listen, heard the big sloshing movements only once more, and then they stopped.

I snacked as I rode, but held out lunch until we saw the “truck on a triangle” sign (the one indicating a downhill ahead).  We finally reached it, ate lunch, and then enjoyed a much-deserved steep zip downhill.  Jack is definitely a faster downhiller than I am, so this time he tried to stay behind me and I tried to stay ahead of him.  It took all my pedal power to do it, with him just gliding along.  At one point my helmet rain cover went flying off and I sure was glad Jack was there to retrieve it, (so I wouldn’t have to grind back up ¼ mile).

Our downhill took us to the Pend Oreille River.  This time of year, it is hugely wide.  Have I mentioned that there is SO MUCH water up here?  We turned north for 5 miles and entered the town of Ione.  From here it is only 20 miles to the Canadian border.  Another grocery run for dinner and breakfast tomorrow because we’ll be in a remote camp tonight.  Jack and I met an older couple in the parking lot who asked about our trip and told us we’d be getting rain today for sure.

From Ione, we suited up for rain, crossed the river, then headed south down the eastern bank.  The rains never came and we started sweating so the rain gear came off.   The AC route here leaves the state highway and takes a wonderful isolated road following  the eastern river bank.  In eighteen miles our campsite came into view.  73 miles today – more than we anticipated, and we were both tired.  Jack and I have determined that all distance estimates must be multiplied by 1.2 as a reality check.

It was already about 7PM, and the gang was already there and set up, having beaten us by about an hour due to their superior legs, earlier departure, and also since they hadn’t taken the meandering AC routes.   We set up, ate, chatted, swatted lots of mosquitoes, and finally strolled down to the river for some photos.  And then, the rains.  Run for cover.

So here I sit in my tent, munching trail mix, raindrops making a delightful sound from every angle but I sit here dry.   From his adjacent tent, Jack has just asked, “Rich, does it get any better?”