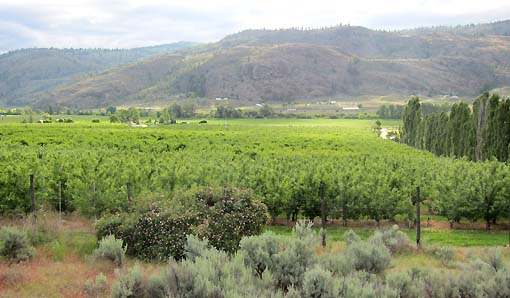 Splatters of rain last night in Riverside but no big deal.    I was the last to get up and packed this morning.  It was cold and I just didn’t feel like getting out of that warm sleeping bag.   The gang sans Jack and me pulled out, and 30 minutes later we followed.

The sixteen miles to the next town, Tonasket, were due north, facing a stiff 20 mph headwind.   It was a slow motion 6 mph process, and even down hills we had to pedal to reach 10 mph.  Two hours of riding to get only 16 miles!

In Tonasket, we found a family restaurant and the whole gang just finishing their breakfast.   Only Jesse remained, so we joined him at a table and enjoyed a hearty meal together.  The tough ride this morning, some residual fatigue in his legs, a challenging mountain pass just ahead, a forecast of rain, and a forecast of sunshine tomorrow convinced Jesse to find a room in Tonasket for the night, with a plan to tackle the pass tomorrow.

Jack and I considered the same, but finally decided to make a go at Republic.  A long (27 mile) ascent followed, somewhat easier than that tough one three days ago, but compounded with steady rains and cold wet temperatures approaching the top.

As we labored up, a black pickup truck headed the opposite direction stopped beside me.  A lady, sporting only a couple of teeth, popped her head out the window

Lady: “Have you seen a small brown and white dog?”

She took off down the road.  I pedaled for maybe only 150 yards, rounded a bend, spotted Jack a ¼ mile ahead, and there was Coco running around behind his bike, and out into the street slowing traffic.    Pretty soon Coco turned her attention to me, so I stopped, parked the bike, called her name and she came running over.  She wasn’t wearing a collar the I could hold, so I resorted to scratching her under the chin and then on the belly as she flopped over on her back.  Where was Mom?  I decided to hold on to Coco for about 10 minutes, and fortunately, in only about four, Mom came up the road and pulled over.  At first she thought Coco had been hit by a car (because she was flat on her back) but then was overjoyed to see her pet intact.  She said Coco had been missing for a week, thanked me, and took off up the road,.  I spent the next 5 minutes peeling dog hair off my wet cycling gloves.

Temperature dropped plenty and Jack and I went through multiple wardrobe changes.  I passed by a big mound of white foam by the roadside, and finally realized I was looking at snow.  Probably mid-40s out – they call this June up here?

Nearing the top of the pass, we entered Wauconda, which consists of exactly one café/store.  But what a great stop.  Every cyclist on the Northern Tier route MUST stop in Wauconda.  Mattie, the main proprietor, especially caters to cyclists in a wonderfully coarse but caring way.  In addition to serving up tasty burgers, she has a nice warm fire burning AND offers to dry any wet clothes in her own dryer.    She knows the cycling times to all the destinations, and she offered to help us make calls for camping and lodging.

Three point four slow grind miles to the top of Wauconda Pass, then a fun-filled 13 mile roll down into Republic. The rains picked up again but I didn’t mind at all.  Instead, I found myself cruising down the mountain side, clouds swirling low around the pine tops, cold air flapping my jacket, swiftly using my pre-paid miles, with Jack a little dot way down the road.  All the while thinking Jack’s phrase to myself, “Does it get any better?”  This phrase is a perfect compliment to my oft-mantra, “How lucky are we?”

The gang had chosen to camp tonight at a fairground, but Jack and I were cold and wet and decided on a room at the Northern Inn in Republic.  Warm shower, TV, and wi-fi, and to top it off, hot pizza and cold Pepsi from a neighborhood pizzeria.  Add in “America’s Got Talent” for a true quality evening. 🙂

Another 56 mile day, this one certainly rainy and cold.  Another mountain pass.  Hard to believe we passed the 500 mile mark today.  Best of all, our bikes, bodies, and spirits are faring quite well so far.  Yet another mountain pass facing us first thing tomorrow morning.