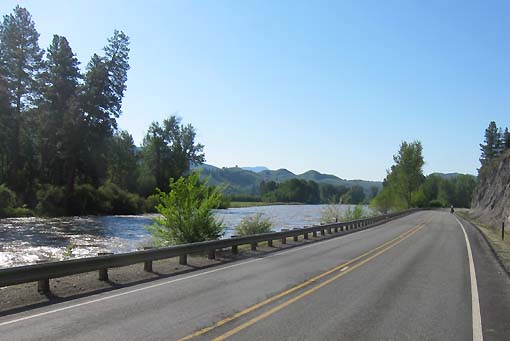 Despite snoozing in a little bit, Jack and I both got up by 7AM, and cleaned and lubed our bike chains before rolling out of Winthrop this morning.  It was a short 9 mile roll downwind to the town of Twisp, where four of the RA team had spent the night.  Jesse got up extra early from our motel and had already ridden there himself.

Everyone had eaten and rolled out, but we did manage to catch Frank on his way out of town.  Jack and I backtracked to the Twisp main street and found Antler’s Saloon which served a very respectable breakfast.   Two real friendly guys were inside, interested in our cycling trip, and we talked about places to go in Washington.

A stop for groceries, then the abrupt beginning of our climb for the day, a 3000 foot ascent over Loup Loup Pass.  Without question it was a chore, but much more manageable than the climb two days ago.  We were even tailwind assisted, and the temperatures were beautiful.

About 2 miles from the top, we hit a quiet stretch and entered what I called the “corridor of crows.”  Dozens of them high overhead in the tops of pine trees, perched or gliding about, calling and cackling.  Their sounds seemed to echo above me in a mysterious way, filtering down from the treetops.  The way of the mountains. The ghostly call of the mountains.  Something like that.

I encountered a hiker who was hitchhiking too.  He had a dog and a huge pack which he estimated at 60-70 lb, and said he could only go on foot for about a mile at a time up the pass.  That’s one heavy pack.

The descent from Loup Loup was, in my opinion, better than the ones 2 days ago.  More controlled, less traffic, easier to just let the bike rip and smoothly take the turns, rather than worry about close traffic or eroded edges.  I got my Surly up to about 38 mph, pretty fast for a loaded down bike.  We noticed that the terrain changed very quickly down this mountain, from tall pines and wetness to sagebrush and dryness.

We took Adventure Cycling’s side road beside a landfill, and except for the smell it was a nice alternative to SR20, rolling past a big apple tree orchard.   We entered the town of Okanogan, rolled down the main street, and finally found a sheriff parked on the roadside.  We figured he’d know the good places to eat in town, and sure enough he pointed us to Wallwebbers back up Main Street.

Delicious sandwiches and exceptional soup were our rewards.  Jack asked how things could possibly get better, again.  With such good food, we wondered exactly how it is we were “roughing it” on this trip.

A few more miles and into the town of Omak, where we sought out a WalMart for dinner provisions.  I scored a pre-made Asian salad, 2 Greek-style yogurts, a small bottle of California white zinfandel, and shortbread cookies made by elves.  A real international meal.

Leaving the WalMart, we encountered some very high winds, easily gusting above 30 mph.  It was soon apparent that we’d be riding straight into them on our way to camp, and I suggested to Jack that the nearby Best Western was looking pretty good to me.   But we committed to the ride.   As we labored, we realized that something was wrong about our route, so Jack called on the trusty iPhone4 and corrected our course.  One encounter with a fiesty dog later and we were back on track, facing a 5 mile slog directly into the fierce headwinds.

It could have been worse, and we arrived to find all our friends already set up at Margie’s RV Park in Riverside, WA.  We were given a yard in front of the RV parking area for our tents, and use of the facilities (shower, rest rooms, etc.) for $5 per person.   Not bad.  The winds continued and temperatures dropped quickly.  Still, we all lounged around on the grass (in Roger’s dining room) and ate our dinners.  Two of us (Bill and Roger) fired up burners and had warm meals, and now Jesse is now interested in doing the same in the future.  Not me, though – my asian salad was delicious.

On a sad note, we learned that Frank’s aunt, 78, in Maine died.  Frank and she were close and he had talked about the difficulty of explaining the bike trip to her.  We’d hoped to meet her when the group reached Maine.  Frank considered leaving to be with family at this time, but his family has urged him to continue on the ride, and that his aunt would have preferred it that way.  We are very glad he is continung on with us.

Early in tent (8:15PM) as it is getting windy and cold – my sleeping bag sounds like a good place to be.  About 56 miles today – new cyclometer is working like a champ.

3 thoughts on “RA8: The Corridor of Crows”