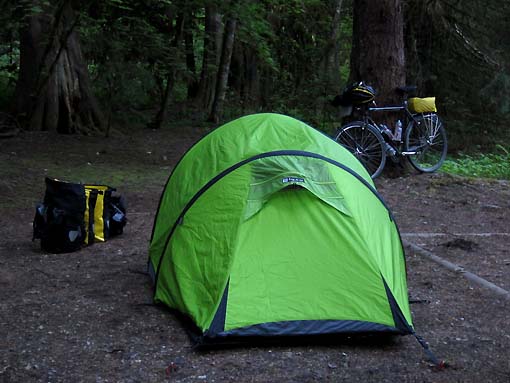 Note: Please be sure to check out the blogs of other riders on the team.  Think we have enough blogs?

This morning at Colonial Campgrounnd, Jesse sat at a table studying today’s ride plan.  He looked up and commented, “Well, on paper this ride looks impossible.”

All seven of us have been aiming for today’s ride for quite a while.  It will take us over two difficult passes of the Cascades.  Additionally, it will take us through the sections of the SR20 highway that were closed due to snow only a couple weeks ago.  Was the ride impossible?  No, but I’ll say it is impossible to adequately describe.

A brutal morning climb from the campground out of the Diablo Lake area.  9-10% grades with no warmup.

Since yesterday, I’d been playing around with the camera trying to get the ever-popular flowing water shot, and early today I finally managed a decent one.

We climbed steadily for about 6 hours through some of the most beautiful country I’ve ever seen.  Raging snowmelt waterfalls at every glance.  Spectacular snow covered mountains rising all about.     Head turning views everywhere.   The only downside was the constant pressure of climbing climbing climbing.  I even started inventing reasons to stop, like making a couple of snowmen and placing them in the bike lane for my RA teammates further down the mountain.

Finally we entered snow region.  A little at first and then more and more.  After some 29 miles of straight climbing, we finally reached Rainy Pass (Gary, Roger and I arrived about the same time).

From there, one blessed mile of downhill, and then 4 miles of the steepest climbing yet, a steady 9-10% grade.  This kind of grade is always tough, but with a 90 lb bike you’ve got a real chore on your hands.  It seemed weird to be wearing only bike shorts and jersey riding through the snow, but we were working that hard.

Reaching the second and final pass (Washington Pass) was a true relief.   We stopped to put on warmer gear because we knew a whopper of a decent awaited us.  And what a decent.  The scenery was even more magnificent but we had precious little time to see it because we were flying downhill.  I did manage to stop twice, even on the steepest sections.

The next 18 miles were one big long fabulous downhill, covered in about 40 minutes.  At the 53 mile mark we reached Mazama and stopped at a general store to regroup.  It seemed everyone was grinning.  Frank proclaimed it “the best cycling day of my life.”

Jack, Jesse, and I teamed up for the final 14 miles into Winthrop.  Jack and I had already decided to stay 2 nights there.  We will take a much-needed rest day at last.

In Winthrop, the team met for a bite at the Riverside Inn, and celebrated today’s ride with a few beers.  Everyone felt some measure of accomplishment, because this might be the most difficult riding day we’ll face (on paper at least).   But mostly, we were simply in awe of the magnificence of the terrain around us.

67 miles today, and the guys with the meters tell me we climbed 6100 feet.  Jack and I have ridden 6 days straight for 430 miles, including this whopper of a climb.  The rest day should do us both a lot of good – there are more mountain passes ahead.

14 thoughts on “RA6: The Best Cycling Day of Frank’s Life”