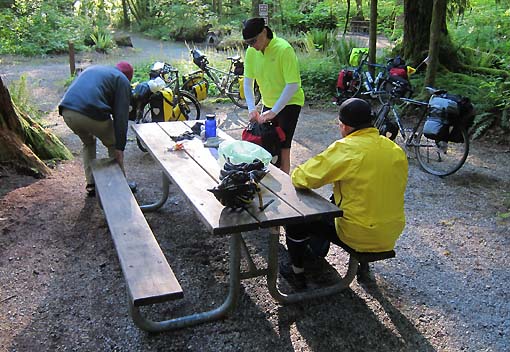 When I was scuba diving a lot, I used to rate my dives, but I’ve never tried to rate bicycle rides.  Today’s ride: 10.

Starting from camp at Rasar SP, we basically followed the Skagit River valley eastward on SR20.  The skies were atypically clear blue (no rain!) and temperatures already climbing out of the 50s – perfect riding conditions.   Our first stop: Concrete, WA.  Visions of young Leonardo DiCaprio and Robert DeNiro came to mind (movie: This Boy’s Life) as we pulled first into the Saturday Market and then down the tiny Main Street.  Great breakfast there, and real friendly people.

Then a stunningly beautiful ride through tiny towns of Sauk, Rockport, and Marblemount.   Huge pine forests everywhere.  And as a resident of the desert, I was astounded at the amounts of water everywhere.  Cascading waterfalls every mile or so.  What they call a “creek” here is often a fabulous wide waterway gushing over big boulders.   The Skagit River itself carries huge amounts of deep blue-green water seething along at a brisk pace.  And all the while, the snow-capped Cascades loom in the background, ever larger with each pedal stroke.

We stopped in Marblemount for lunch, and also for dinner and breakfast provisions.  It is practically the last sign of services we’ll see for two days, so the gang stocked up before hitting the road again.   The wind shifted into a tailwind for us, and as we slowly ascended, the Skagit River got increasingly rapid and even more beautiful.  I saw both bear and deer tracks in the gravel beside the road.

We all stopped again at a general store in Newhalem for a snack.  A couple of Harley riders chided/complimented me as “one of those show-offs with two wheels and no motor.”  I replied that indeed I had a motor and it was rated about 1/10 HP, and how could I show off with it?  With a grin of course.  There are a lot of Harley riders up here.

A final 10 miles into camp, but those gave us our first real taste of the climb into the Cascades.  The guys with the meters told me there were long sustained stretches of 8% and 9% grade, and it felt like it.   At one point we rode through a steep uphill tunnel ¼ mile long (and I forgot to take off my sunglasses).  The Skagit River dropped beneath us and we passed by a couple large hydro dams, looking down on them from high above.

The rock walls next to the road were great, nearly vertical in places, and occasionally we’d pass gorgeous postcard-worthy waterfalls dropping in steps from several hundred feet up.   The falls, presumably from snowmelt, entrained a rush of moist frigid air across the road, dropping the air temperature like 15 degrees – the effect was really cool (pun intended).

Camp at Colonial Campgrounds besides Diablo Dam.   We’ve climbed about 1000 feet into the Cascades, only 20% of what we’ll do tomorrow.  The camp is great, set in an old forest.  Jack and I set up in one tentsite, and decided to try to build a fire.  I asked our neighboring campers about firewood sources, and pretty soon they’d brought us a few nice logs, two ears of hot grilled corn, and a whole pan of baked beans!  We built a humble little fire – which everyone seemed to like because they all soon gathered at our site.  Jack mentioned that the campsite ambience was really served by the fire, while our netbooks really served to take it away.

A mere 56 miles today – practically a rest day compared to the way Jack and I have been riding.  Tomorrow is going to be our toughest test yet, though.  Up through 2 steep passes of the Cascades.  This route will take us through the avalanche area that Washington DOT plowed back in May.   We’re really looking forward to it.

Today I joked that we should have done this ride east to west, saving this part for last.  Today’s ride was that good.  A dream come true.