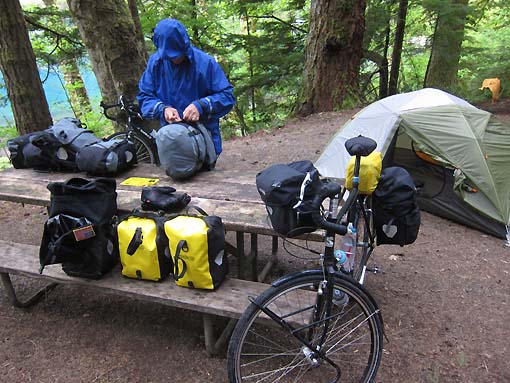 As expected, it was cold last night at Fairholm, officially 38F.  I left the tent fly open all night and was rewarded with a decent drying of both the tent and its contents.  My “30F” Marmot sleeping bag performed well, supplemented with silk long johns and wool socks.

We headed out on a very winding road around the lake.  Before you start on it, you push a button that activates flashing signs that warn motorists that bicycles are on the route.  The road has very little shoulder and is frequented by logging trucks that roar by a couple of feet away.

You’d think that a road around a lake would be nice and flat, but you’d be wrong in this case.  Plenty of climbing and plenty of gorgeous views of the lake on one side, and of cascading brooks and falls pouring into the lake from the other side.

After 15 miles, at the far east end of the lake, we stopped for breakfast at “Granny’s Café.”  While we worked on pancakes, locals talked to us plenty and we learned of route options ahead in Port Angeles.

Fourteen hilly miles to Port Angeles, and we then sought out and found the Discovery Bike Trail, as advised.  It started out beautifully along the waterfront, then through lovely archways of trees, but quickly became a circuitous exercise.   One triple switchback with more than 15% grade convinced us to abandoned the trail after about 6 miles, so we headed back to US101 despite the roar of traffic there.

Lunch in pretty Sequiem, which I consistently mispronounce as “seh-kweem” (it is actually pronounced “squim”)  Furher down the road, Jack and I had paused on the roadside when a UPS truck stopped and the driver hopped out.  He said we was a bicyclist, and advised us to avoid an upcoming hill by taking a side road.  As we cruised down the side road, Jack suddenly realized that a good friend and former neighbor actually lived on this very road, and that the bicycling gods must be telling us to go visit him.   We found his house, but alas, he was not home, and so Jack left a note.

Another 20 miles or so brought us to the day’s destination, Port Townsend.  In the process, we endured some dangerous riding on SR20 as it leaves eastward US101 (the first 3 miles are not advised for cyclists) and some steep repetitive climbing on both SR20 and on Discovery Road.

I’ve whined unintentionally about the climbing today, but today’ mileage (84 miles) plus climbing (3200 ft) took its toll.   We really don’t intend to ride that far on any other day the entire tour, but for the past three days we’ve stretched ourselves out in order to try to meet our RA friends on time tomorrow.

Tonight Jack and I are pretty bushed, laying back in a motel room in Port Townsend, even too tired to go out to eat, but apparently not too tired to blog.  I bet we both wake up in the middle of the night with roaring appetites!