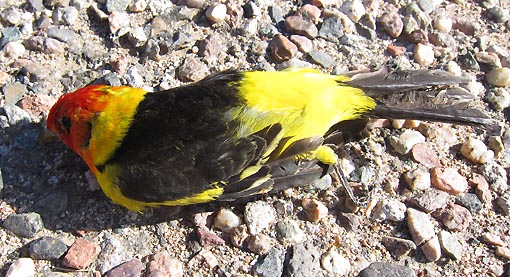 Neither Ed nor Jesse could join me this morning, but I decided to get in one last conditioning spin.   As a show of how distracted I am these days, anticipating next week, I rode off from home and down King Kong hill before realizing I wasn’t wearing my helmet.  Slogged back up the hill to get it – bonus miles!

Halfway to the lake I spied a beautiful bird by the roadside.  As a closet birder, I knew right away it was a western tanager but I’ve never seen one in the wild.  They are fairly common in some wooded areas of Arizona but much less so in the desert.  This one was adjacent to a stand of trees next to the Salt River.  I was only half thrilled to see it, because, afterall, it was dead.

So why is it that some people are compelled to toss their Christmas trees out the window?   Is that some sort of holiday tradition?

Headwinds again coming down the Beeline but only mild ones.  I retreated some half a mile to take yet another roadkill photo.  This one was fairly fresh and gruesome, but still kind of cool because I had no idea that badgers lived out here in the low desert.  Two of them, big furry guys maybe 10-12 pounds, were killed in this same spot, probably just last night.

Yeah, I know.  This roadkill thing is starting to get out of hand.  Hey, I’m just dealin’ with the sights I’m presented with.

I stopped at the Verde River bridge, rested the legs, and watched some fish for a while.  As I did, another cyclist rolled up and asked where I was headed.   Turns out he’d done some touring (Colorado up to Alaska), so we talked about his adventures and gear for a while.  He said meeting me had made his day because it brought back good memories, and that the RA team is set up to have a real adventure.

Breakfast by the Fountain.  I checked over 10 wifi networks available but none would connect.  The eleven o’clock hour came and went and the fountain never operated.  But some Memorial Day group of trumpets was practicing nearby so I got to hear “Taps” about 8 times.

Headwinds picked up a lot down the Beeline, and it was a fight to reach McKellips.  At the Shell station at Beeline and McDowell, I ran into a 70-year-old guy named Jim who was the former president of GABA in Tucson.  We talked touring for quite a few minutes.  He described a “challenge ride” he’d once done from Nogales to the Grand Canyon, then hike rim-to-rim-to-rim, then ride back to Nogales.  Now that sounds insane.

Winds finally helping a little bit back on McKellips.  About 64 miles.