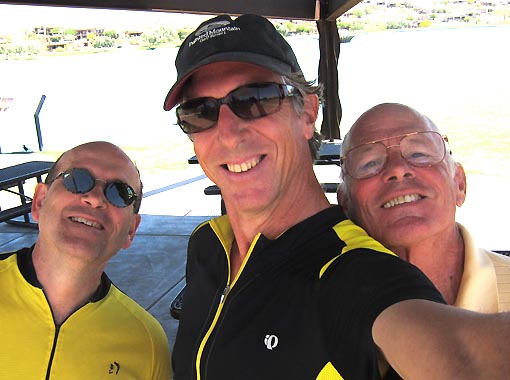 Leaving the full ‘practice pack’ in place, I sluggishly rolled out this morning and down Bush Highway.  At the river bottom, a beautiful buck deer strolled out onto the highway in front of me.  I stopped a good 200 yards away, but he saw me before I could arm my camera and sprung off into the desert.

Nearly to Saguaro Lake, I passed another loaded down touring cyclist going the opposite direction and waved.  Another cyclist soon came along too, so I again waved, and he called out, “Hey!”    Pretty soon, he’d turned around and caught up with me, and only then did I realize it was friend Ed Dumas.  Together we rolled east to Salt River Recreation Stop #2 and sat down at the pavilion for a break.

Ed decided to join me for the ride to Fountain Hills.  We tackled the hills around the lake, and even with the full pack weight, they didn’t feel too bad.  The conditioning is starting to pay off perhaps.

At the Beeline and running late, I called Jesse, and learned that he’d had multiple flats this morning and finally decided that it just wasn’t his day to ride, but, by car, he’d meet us at McDonalds.

Beeline presented some 3-6 mph headwinds, nothing too much.  It was nice for Ed to lag back for me.  On his road bike I’m sure he wanted to take off, but even as he was lagging I could barely keep up.

We met Jesse at McDonald’s and then at the fountain.  He showed us a tiny sliver of steel wire that had caused his flats, a single strand from a steel belted tire no doubt.  You figure these things are laying flat on the ground and wonder how they can ever work their way into and through a bike tire and tube.

Stronger Beeline headwinds on the way home between Shea and McKellips, and then a much-needed tailwind assist heading back east on McKellips.

Approaching Stapley, Ed stood up on the pedals and his rear tire went mushy.  We stopped beneath a tree to fix it, and Ed started laughing when he found this steel wire (in the photo below) as the culprit.   For scale, the curve you see at the photo’s right is the edge of my sunglasses. 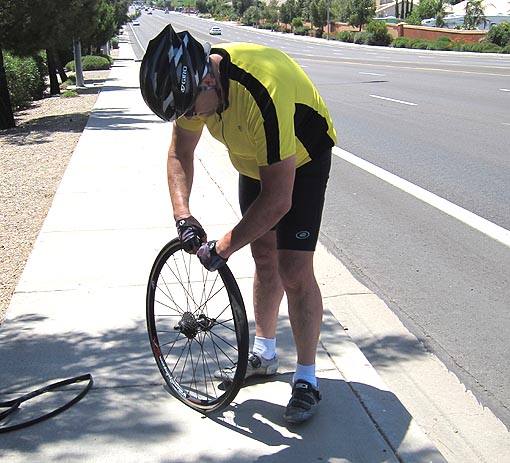 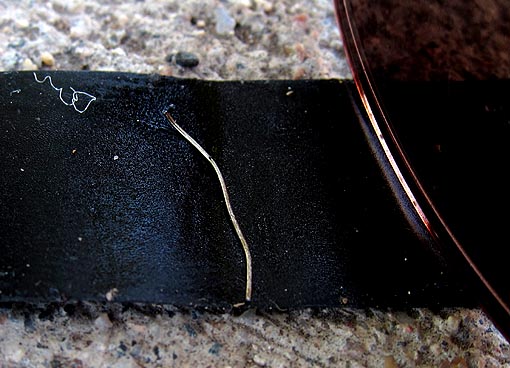 Ed and I parted close to my house and he continued east logging in well over 60 miles today.  This was a very nice ride on a comparatively cool May day (only about 90F high).  My new Shimano shoes ride better (they’re stiffer and with better cleat positioning) than the old Keen Austins.  The soles are thicker, which prompted me to raise the seat about 1/4″.  For me, about 57 loaded miles.