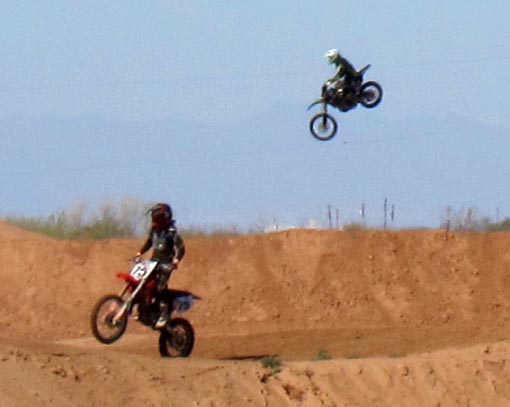 When the alarm bell went off Saturday morning, I just lay there in bed and stared at the ceiling.  Friday’s ride had been a workout for me, and the idea of a spirited chug with the bike club around the foothills of Ahwatukee just did not appeal.

However, I decided I’d like to do a little pedaling this weekend, so when Linda set off for golf this morning, I hopped onto the still-loaded Surly and set off south for Queen Creek.  I’d always wanted to explore the passage down there, both by Ironwood Road and by Ellsworth Road, because they looked pretty decent by car.

Ironwood turned out to be fairly good.  Maybe 18″ of shoulder that drops off at an angle.  Moderate levels of 50-60 mph traffic.  I stopped at one point to admire a big hilly dirt track full of motorcyclists.  I couldn’t believe how high some of them jumped.

South to Empire Road, which we’ve used on CG100 rides.  West to Ellsworth, then north again.  Ellsworth through Queen Creek is pretty bad.  Thin or no shoulder, and sometimes a curb that contains you.  No sidewalk.  If traffic had been heavy it would have been treacherous, but not too bad today.

Stopped at the Rhino Caffe in Queen Creek.  A very nice local place with some of the tastiest decaf I’ve had, and a good egg-cheese-bacon sandwich too. 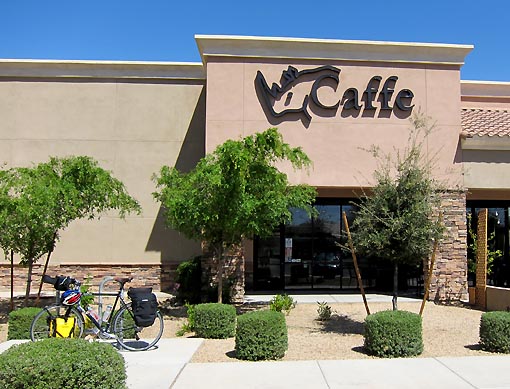 A mile or two north of there Ellsworth gets great, with an excellent shoulder all the way up to Mesa.  In summary, I’d say both Ironwood and Ellsworth are acceptable bike passages between Mesa and Queen Creek.

This loop was about 57 miles and quite flat, except for the initial climb east on McDowell, and a minor climb on the way home.  896 ft according to bikely.com. 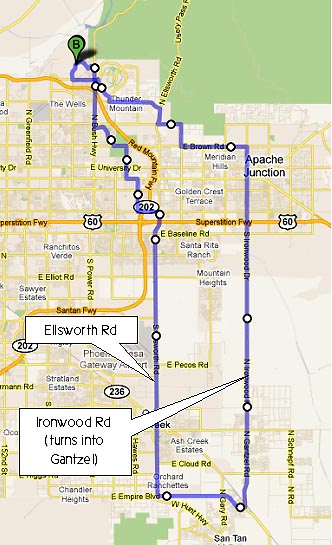