Well, it’s March, and high time for working into final shape for our departure in May.  In my way of thinking, this means doing a number of longer rides, i.e. 60 to 100+ miles, in order to build endurance and toughen the saddle.  And it also means doing a  number of rides that will simulate the daily routine, i.e. fully loaded and in the 50  or 60 mile range.

Following last Saturday’s club ride, Gary and Frank discussed plans to do this conditioning ride, and so I ditched my own plan for a century and instead showed up Sunday morning for it.  The plan was for a fully loaded practice trip, so I stuffed tent, pegs, footprint, sleeping bag, bedroll, pillow, rain gear, and armfuls of clothes into my panniers, reaching probably 70 lbs weight.

We started at AZ Bread at Kyrene and Elliot Roads in Tempe, then took the normal route through Guadalupe to South Mountain Park.  In the process I turned back once and picked up 3 golf balls in the street next to Vistal Golf Club.  We wondered if they were all from the same golfer (2 Titleist and 1 Srixon).

Climbing to the towers loaded down with bags was an experience for all of us. On the final 2 climbs I learned that it was possible to ride at only 3.7 mph, a personal best, or worst.   It took us all just a few minutes shy of an hour to do the 6.8 miles to the top, which included one stop for a breather.  A bunch of work.

Descending from the summit was a good experience too.  Before the ride I’d changed out my 40mm Schwalbe tires for some 32mm Continentals that Jesse had supplied me.  They handled well and rolled great.  Add in the acceleration factor of all that additional weight, and I had quite an amusement ride, riding the brakes steadily all the way down.

On the way we detoured to the Hidden Valley Trail lookout and stopped to explore.  Why some idiots decide to add graffiti to the natural beauty I’ll never know, but the park service does a good job at minimizing the effect of it all.

Then the long descent down – a kick in the rear.  We regrouped at the park gate, and then again at the Circle K at Central and Dobbins for fuel.  I scored a cherry pie, fruit Mentos, and a bag of “smoked bacon” peanuts.

We headed west from there on Dobbins, vectoring south where we could, and eventually found 51st Avenue headed south around the mountain.  It’s a great road out in the open desert, one I’d never been on before.  Nice shoulder, not too much traffic.  Its name turns into Beltline Road, and then into Riggs Road as we headed southeast and then due east.

At one point we passed a pretty dead bird on the shoulder and I figured I had to go back and take a photo of it.  I later identified it as a sparrow hawk, a.k.a. American Kestrel, one very beautiful little hawk.

Breezes were not strong today, but were coming from the south, which wore me down on this stretch.  It was a relief to finally reach  Maricopa Road and head northeast.  We then basically followed the club’s Tour de Sue route back to AZ Bread, stopping once at a Chevron.  For me, about 63 miles total, a perfectly typical day of touring.

Loaded riding is a different mentality.  You’re out there to smell the roses, and frequent stops are welcome.  I think this ride helped our conditioning, and also reinforced this idea. 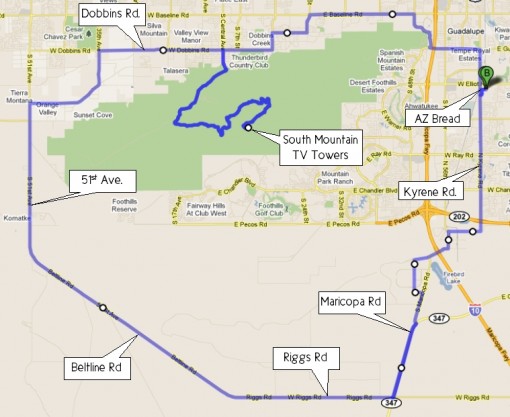