If you’re wondering what that RA2011 is to the right, it stands for Ride Across.  Seven of us plan to make an attempt to ride across the North American continent during the summer of 2011.  I guess it’s something on the bucket list for each one of us in one form or another.  My riding partners will be Jack, Jesse, Gary, Frank, Roger, and Bill.

Name: Jack and I originated the ride back in September last year and eventually started referring to it as “RA.”  We liked the idea that it didn’t focus on the USA exclusively, since our route may well take us into Canada.  And we also liked the acronym referring to the Egyptian sun god Ra.  Of course, my lifelong appreciation for all things Todd Rundgren and Utopia played a role in this (re Utopia’s 1977 iconic album titled Ra).

Route: We weighed many factors to create a suitable route.  Among them:

Jack and I will start on the coast of Washington (Ocean Shores) and head north to Anacortes, also on the coast.  We’ll then meet up with the team and roll across the top edge of Washington, generally following the established Adventure Cycling “Northern Tier” route.  I’ve never been in the Pacific NW and I really look forward to seeing both the coastal regions and the mountainous regions.  Yep, we expect rain.

In Williston, North Dakota, we’ll plan to head down the Missouri River in the same fashion that Randy and I did last summer.  This will generally follow Adventure Cycling’s “Lewis and Clark” route.  This time we’ll head all the way down to Omaha in order to link up with RAGBRAI, which will take us across Iowa to Davenport.

From there we’ll pick up the Northern Tier route again, and likely head east to Sandusky, Ohio for a ferry ride north across Lake Erie.  Then a roll along the north shore of Lake Erie to Niagara Falls.  We’ll re-enter the US and continue across NY, Vermont, NH, and Maine and finish in Bar Harbor. 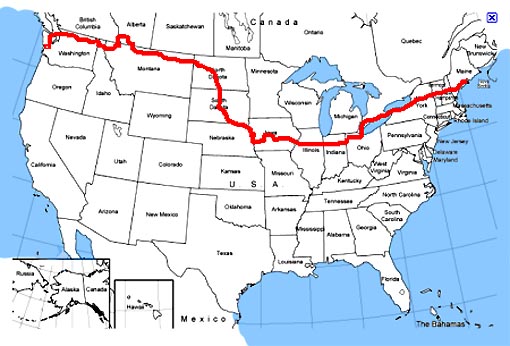 Route Options: We’re sure to be making route decisions continuously on the road.  A few options we’ll consider:

Travel Mode: Self supported.  Each rider will carry tent and sleeping bag, and we’ll plan to sleep in city parks, state parks, and RV camps.  We’re hoping Roger will teach us how to stealth-camp.  Also, most of us plan to credit card it whenever we feel like it.

Schedule: Our start date of May 31 is keyed in order to link us up with RAGBRAI.  This is always a difficult thing to do – you never know what the road may bring.  The general plan calls for a hopefully conservative 50-60 miles each day, with a rest day scheduled every 5-7 days.  We added 4 or 5 “margin” days prior to RAGBRAI so we’re not rushing.  Additionally, there should be opportunities to shave off additional days by taking more direct routes, if we should desire or need to.  A very loose estimate puts us in Maine by the end of August.

Online: Frank plans to keep an online journal at http://www.crazyguyonabike.com/Fprest8.  I am sure I’ll be writing up something as well but haven’t decided the form yet.

Ra, climbing the horizon
Rising up the mountain, lighting up the valley below 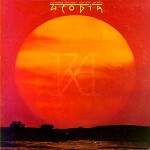