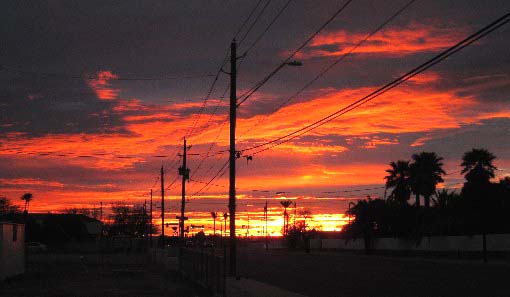 I slept pretty well, despite the steady flow of tar and nicotine.  At 6:30AM I opened up my door for some fresh air, and waited until 7AM to meet Jesse.  We rolled out to catch an electric sunrise over the state prison and then made a few cruises through Old Town Florence, which looks sort of like an unimproved Tombstone.

We pedaled over to the Holiday Inn where there was a Burger King and, I was hoping, other choices, but found none.  We returned down the main drag to Old Pueblo, already open for breakfast.  I had a pancake sandwich disassembled (technically a 2x2x1) and coffee.

We hit the Blue Mist and then highway 79.  Winds were already blowing from the south and southeast around 10 mph so we were trundling along right into it, doing maybe 12-13 mph.  To compound the winds, we knew that today would involve a 37 mile gradual climb before descending into Oracle Junction.

Various riding groups formed and dissolved.  About 10 miles south of Florence, I found myself riding with Steve and Jan.  Steve was telling me about dinner last night at the Greek restaurant in Florence, and how the owner had described wonderful aspects of the Greek Orthodox Monastery south of town.  In fact, he even declared that it was the 2nd most visited attraction in all of Arizona (2nd to the Grand Canyon of course).

Although doubtful of this claim, we decided it was probably worth checking out, especially since he had said it was only a mile off the highway.  The three of us turned east onto Paisano Road and were happy to be temporarily out of the headwinds.  The “mile” turned into about 2-1/4 miles, and we soon saw fenced gardens and church spires, one of them perched high atop a hill.

A sign out front instructed us that loose clothing was required for entry, which pretty much put our cycling clothes in the forbidden category.  I grabbed blue jeans and shirt out of my panniers, while Jan adopted a long skirt, shawl, and kerchief supplied by the giftshop monks.

We entered the gift shop and learned that a short tour began at 10:30AM, some 40 minutes wait.  While we milled around the shop, Steve conversed with the monks and then with a group of Greek-speaking ladies.  He got what-appeared-to-be some great video of them teaching him to properly say “Thank You” in Greek.

The tour included a short speech about the monks, the guests, some of the compound’s operations, and some history.  Our monk tourguide was a young man with a wonderful aura of wisdom and peace surrounding him like a cloak.

The compound contained some 6 or 8 churches, all of various sizes, all with ornate decorations of artwork and wood carvings.  Each church was laid out the same with depictions of Jesus on the right side and of Mary on the left side, and usually a centrally placed chandelier of candles.  We were permitted to take photos anywhere, but none of either the monks or the resident guests, for privacy reasons.

I really enjoyed the visit and we roamed around after the tour for another 45 minutes.  The grounds have orchards of citrus and olive trees, and plenty of other flower and vegetable gardens.  Tranquil and peaceful.

We changed back into bicycling clothes and headed back out onto Paisano Road.  The winds had increased dramatically and were now screaming at us from the southwest, almost directly in our faces heading west.  When we reached the highway and resumed southeast, the winds were almost 90° crosswinds hitting us from the right.

Weather reports later showed these crosswinds to be 25 mph sustained winds.  The really difficult aspect was the steady diet of 45 mph gusts.  The three of us worked 8 tough miles, down to Tom Mix Monument.  Holding our line without being blown left into traffic was a constant challenge.  One had to ride leaning right into the winds, and also stay poised on the handlebars ready to abruptly shift weight to compensate for the gusts.  Likewise, one learned to watch the grasses about 10 yards ahead for signs that a gust was about to hit.

It was a decent effort, but one I was enjoying.  It made the riding interesting and different.  I can tell you that I’ve never used my gears so frequently for such a sustained period.  Another challenge was to force oneself to relax and enjoy aspects of the ride, rather than tense the shoulders or white-knuckle the handlebars.  Mind over matter.

At Tom Mix Monument, we all settled inside the tiny leeward triangle behind the stone monument itself and enjoyed a makeshift lunch of the snacks we were carrying, cookies, granola, and a tasty candy called Sports Beans.  Fortunately, because Jan had thought to call ahead, the last sag driver had left a gallon of water for us.  All this wind seemed to really dry us out.

Jan decided to ask the support van for a ride to the next logical stopping point, a restaurant at Oracle Junction.  She had trouble finding a spot in the howling desert where she could hear and had phone connectivity, but was finally successful.  With the van enroute, we took off again plowing into the crosswinds.  For the next 30 minutes we made very good progress, another 6 miles or so.

Steve and I got ahead of Jan and stopped to wait for her, and took a few pictures.

Instead of Jan, the van finally appeared with Jan already onboard.   Steve and I had already decided that we wanted to ride our way through this, but the sag driver insisted that we too jump in the van.  She cited some vague unwritten rules of sag, a non-applicable waiver, her own inconvenience, and other nonsense.  <sigh>  Fabricated drama.  I protested – Steve and I had the desire, the time, and the energy to ride on – but in the end I decided to surrender without much fight.  The J&P is a very social ride and I didn’t feel like escalating it.

We drove only 10 miles, and hopped out at the power station, a location of highest elevation along AZ79.   The drive had saved us about 60 minutes of riding, but it had taken about 30 minutes to load, unload, and drive it.  Great.

A nice five mile roll down to Lupe’s despite the crosswinds.  About 6 riders were still there.  The van driver found me and apologized for her insistence in providing unwanted sag support (Jane had set her straight about it).  I was at least appreciative that she’d come forth with that, and so we shared a reconciliatory hug.

I found Jesse still sitting at a table in Lupe’s.  He was scheduled to take over the next sag duty, and so sat waiting for the trailing riders to saddle up.  I was hungry and waited for a while, but then watched as the lethargic waitress approached Steve and Jan’s table, and took their order in slow motion, with all the personality of a blowfish.  Nope.

Within a few minutes I hopped up and took off solo down Oracle Road.  Now heading due south, the screaming winds had an increased headwind component, and forward progress took effort.  Two miles brought me to a McDonalds, and when I spied 2 bikes out front I readily pulled in.

I ordered 2 cheeseburgers and Coke, and then found Jan and Carol perched at a table.  We sat and talked about event rides, touring, and, of course, the great weather.  A motorcylist there jumped in to our conversation and we learned he had ridden across the US decades ago.  Pretty cool.

The three of us took off together and I tried to pull into the winds for about 3 miles.  Jan finally shoo’ed me off, suggesting that she wanted to go slower up the hills.  I finally caught Jan H. and then Steve and rode with him all the way to Ina Road, conversing when we could in the winds.  Steve stopped at the intersection for a photo of the Safeway where Rep. Gabriel Giffords and five others had been shot.

Both Jan H and Carol caught us as we turned west onto Ina and directly into the teeth of the monster.  Sustained winds were still screaming in at 20 mph, with gusts to 35 mph.  I was feeling pretty good and so pulled the train home the last 5 miles.  Just before the Motel 6, I signaled right and turned in to the Circle K for a beer, and Carol followed.  When we stopped she grinned and said she didn’t want anything, but had followed “just like a lemming,” which got us both laughing.

I bought two 24oz Red Dogs, one for me and one for Jesse.  Took a 30 minutes shower and drank the beer at the same time.  Bliss.  And finally out of the wind!

Mary Ellen, Denise, Jesse, and I then enjoyed a wonderful dinner at the Miss Saigon Bar & Grill.  Jesse was a little unfamiliar with Vietnamese cuisine, and so ordered lots of different dishes so to sample many tastes.  Pretty soon his corner of the table was filled with plates!  I thought this was pretty cool.

I order the same delicious green curry chicken I’d had last year, plus a side of rice and side of steamed broccoli.  Wonderful stuff, creamy with coconut milk, piquant and spicy with curry, much like a Thai green curry, and a huge portion to eat, even in my famished state.

Three other tables of J&P riders shared the room with us, and it was a great meal with plenty of laughs.