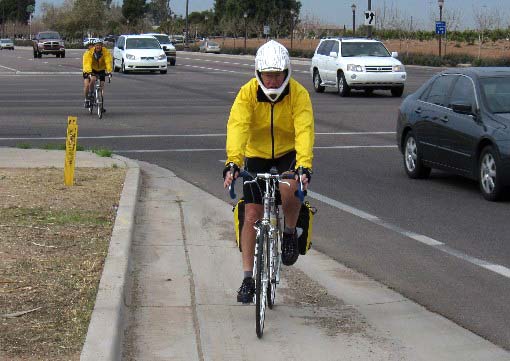 Out of the house about 9:30AM.   I got about 3 miles from home before realizing that I’d forgotten my Artie, the (soon-to-be-a-collector’s-item) mascot of the J&P rides.  Worth a 6 mile detour to go get it?  Nah.  I didn’t want the group to be waiting on me.

South down Lindsay, then east on Ray to Higley, my rendezvous point.  The bike was rolling well and I was motoring, around 18 mph, although I think a tiny tailwind was helping out.

At the intersection, I waited about 25 minutes, until 11:10AM, and finally gave Jesse’s phone a call,  He picked up while pedaling and told me he was only about 2 miles away, already heading east on Ray.  Two tandems came by, and then Jesse.  It was great to see him and great to be getting this year’s tour officially underway.

Without waiting for the group, we took off further east, then south on Sossaman, and soon arrived at the Flight Deck Café for lunch.   As the 3rd and 4th riders in, we sat down early and I ordered a club sandwich and Coke.  Everyone soon joined us and I saw lots of familiar faces from last year.

A small group from Montana had joined us this year and we enjoyed introductions during lunch.  There were also reunions with perennial J&Pers like Steve and Jan, Dennis, Alex, Jane, Paul, Sharon, Carol, and Jan (P).

Everyone ate so fast!  I hadn’t even finished my fries when the group started leaving, and I then wolfed down ½ of my club sandwich and just left the rest, gulping down the remainder of my fries at the cash register.  The cook badly wanted to box the sandwich for me but I begged off – no need to tote it down the road.

I’d volunteered for the 3rd leg of sag duty today, and it was my turn.  Bill and Dana from Missouri owned the van and gave me a few pointers about it, a beautiful 24’ long special conversion that was practically a mini-RV and suited for hauling a tandem inside.  After all the riders left, I hung around in the parking lot for a few minutes, then walked inside the restaurant to be sure that everyone from our group was gone.

In the van and on the road I soon caught up with the trailing riders, a pair of trikes (Roger and Alex I think).   Rolled ahead of 12 riders or so, waited, rolled ahead, waited, etc., listening to CNN News on satellite radio.   A bunch of riders clumped in at a restaurant and I swung by to check it out.  No issues.  No phones calls.  An uneventful sag segment thank goodness.

It took about 90 minutes to reach my hand-off spot at Gantzel and Bella Vista.  Dennis was waiting for me there.  He is an ultra strong rider, and I wasn’t surprised when he told me he’d been waiting exactly 42 minutes.  I apologized, but reasoned that Sharon and Glenda were sagging the front part of the group, and therefore I figured the van was sort of sweeping the back end.    We counted as the last 12 riders swung by, and I finally jumped back in the saddle as the trailing rider.

The 90 minutes in the van had primed my legs, so despite the touring load I really started rolling along, probably 20 mph.   Caught Roger and we conversed about this summer’s touring plans, and I invited him to ride down to Florence and drink beer with us, but he had to decline.

After passing 10 or 12 others, I worked hard to finally catch the pretty red tandem ridden by Bill and Dana rolling along east on Hunt Highway doing 19 or so.  Tuckered out, I drafted behind them for a while, and then eventually took several turns pulling.

We reached Florence and I spied Mary Ellen on her trike on neighborhood streets with several other riders.  We rolled to the Blue Mist Motel and finally did some long lost visiting – I hadn’t seen her in quite a while.

Checked in and was quite surprised to learn that Jesse had not yet arrived.  I had never passed him during sag duty, and had never passed him riding either.  Where was he?   I called and he answered while still pedaling, about 10 minutes away.  When he arrived he explained that he’d ducked in to a Burger King a ways back, and I guess I just never saw him while driving the van.

My room, #114, was unfortunately a putrid smoking room.  I immediately returned to the desk to have it changed, but nothing else was available.  Jesse and I felt lucky to have even gotten rooms here so there was nothing to do but grin and bear it.  The desk gave me a can of jasmine-ozium type stuff and I emptied the can on the walls and carpets, to only minor relief.  Why motels let customers smoke is beyond me – they ought to charge a hefty premium because the property is so ruined afterwards.

A hot shower, then Jesse and I walked about ¾ mile to Old Pueblo, a Mexican restaurant I’d visited 2 years ago.  We both dove in to drinks and chips while waiting for Mary Ellen and a gang from the Holiday Inn to join us.  Fifteen minutes later I’d already downed 2 yummy margaritas, and so switched to beer.

Mary Ellen, Jan P., Carol, Erin, Denise, and John (Harry) joined us and we finally ordered up some real food.  My carne asada with rice and beans was passable and the company was divine.

Jesse and I walked back in the dark, enjoying the comfortable temperatures.  At the motel, I again took issue of a can of deodorizer from the desk, this one called “Night Blossoms,” and thoroughly doused my stinky room.