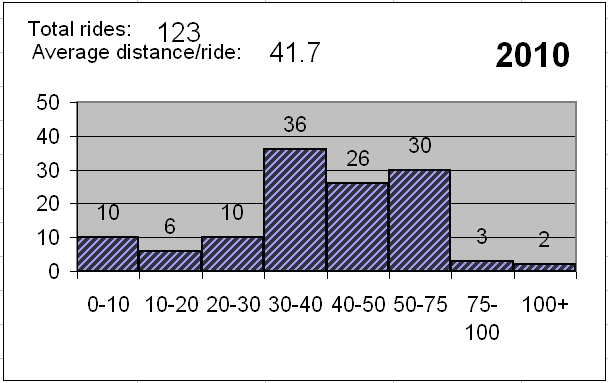 Jack recently dubbed me “Geek-1,” and I’ve got some stats to prove it.  Riding stats aren’t very important, but are fun and provide a yardstick, and I’ve been keeping them since 2004.  Here is, statistically, how my 2010 cycling year measured up:

Total number of rides:  123 – a personal record by 11 rides (next best year 2008 at 112 rides).  This stat is not particularly meaningful when you consider that it includes short errands.

Ride distance histogram (click on image if the numbers are too small):

Monthly totals (click on image if the numbers are too small): 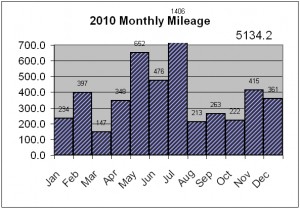 Lots of Saturday morning club rides in there, which go between 30 and 40 miles.

The 1,406 miles ridden in July 2010 was, by far, the highest total I’ve ever done (the next highest month is May 2010 at 652 miles).  This total included the entire tour in North and South Dakota as well as a week riding across Iowa on Ragbrai.  It’s likely I’ll never better that stat but… vamos a ver. It is truly wild to consider that a handful of  long distance cyclists out there ride 1500+ miles per month year ’round.