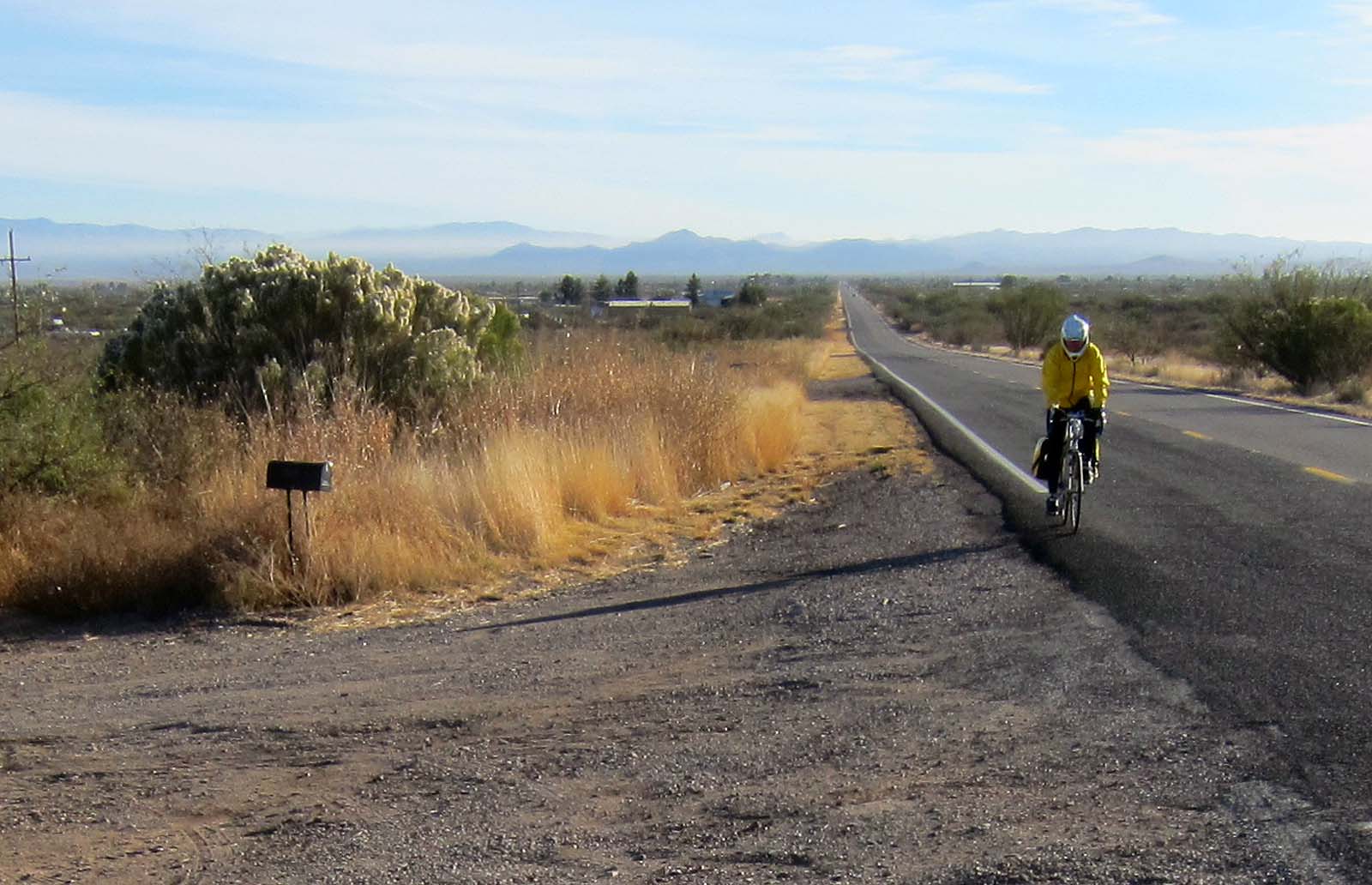 Hard to believe it, but for the second time in four nights, my room was stiflingly hot.  The heater was not on, and so once again it was coming from somewhere else, an adjacent room maybe.  At one point, I turned the thermostat to COLD and turned the switch to ON, but got a continual blast of even more heat.  Apparently the building had only the heat activated at the moment – and this room lacked a window air conditioner.

I lay on my bed unable to sleep for quite a while, and considered calling the desk for maintenance or maybe a room change.  But what a pain – I knew it would take the better part of an hour.   Sleepy and uncomfortable, I finally resorted to simply opening the outside door.

As the cooler air blissfully rolled in, I lay there slowly starting to drift off.  Several people came walking by, talking on cell phones, peering in to the room.  Ya gotta love Motel 6.  I guess it’s possible that someone could have walked in and woke me up and robbed me or something, but I figured that would be pretty unlikely.

Up at 5:30AM, I finally closed the door, prepped my gear, then met Jesse at 6:00AM.  In the dark, we rolled cautiously over to a nearby McDonald’s for coffee and a quick breakfast.  A couple of cops were in there shooting the shit with a couple of locals.  When the cops left, the locals turned their attention to us and one went outside to examine our touring bikes.  They helped us study our maps and offered pointers on the roads and possible sightseeing.

We departed from McDonald’s around 7:15AM in order to maximize the daylight riding time today.  We had a long haul in front of us.

We headed north through the back streets of Sierra Vista and with the help of Jesse’s GPS found AZ90 heading west out of town.  The traffic was thick along there, all heading to Fort Huachuca for the day, and when we reached the front of the line we considered going along with them, through the gates along Canelo Road, and eventually exiting the west gate of the base.

Instead, though, we turned north and continued up AZ90, which promised a better shoulder and less morning traffic.  We enjoyed a nice 7 mile slight downhill, rolling first through the fort and then through Huachuca City, then about 30 miles slightly uphill, turning west on AZ82.   This segment was very pretty and isolated, with little traffic and miles and miles of dry brown grasses and craggy hills.

Approaching Sonoita, the hills turned into some really nice rollers, and I stopped to snap photos of Jesse riding through this stark beauty.

In Sonoita around 10:15AM, we pulled in to the Sonoita Fuel Stop and asked about food options in town.  We were told that there was nothing open until 11AM, but that they’d be happy to cook us up a sandwich on their grill.  Sounded OK with us, so we both ordered up egg and cheese sandwiches, and Jesse even ordered two of them.   I searched in vain for those packages of pecan twirls – there was something about cinnamon that sounded really good.

Finally, Jesse and I took Diet Cokes, OJ, and our sandwiches into the seating area and chowed down.  Good sandwiches made with thick Texas toast.  I finished up and was still hungry, so went searching again in the store.  I finally scored a box of 12 Entenmann donuts, you know, the standard variety pack of 4 cake, 4 powdered sugar, and TA-DA! 4 cinnamon sugar.  We only ate a couple of them, but had plenty of pannier space and figured they’d be good fuel along the way.

From Sonoita, we turned north onto AZ83, a.k.a. Old Vail Highway.  The winds had picked up again, and you can probably guess from which direction.  Four days of headwinds in a row – man!   We had about 6 or 7 miles of modest climbing, and throw in a couple of 5 and 6% grades here and there.

At one railing I stopped to take a breather, and spied a dead deer off the shoulder.  Not so pretty, but we really hadn’t seen much wildlife the entire trip – not counting dead dogs, dead skunks, dead birds, and dead rodents on the road.  I guess it is just too dry and maybe too cold at night for animals to be active in December.

A 6% downhill sign finally proclaimed our reward ahead.  The shoulder narrowed but we were flying along pushing 20 to 30 mph for miles.    The rolling hills turned into craggier points and canyons, and the brown grasses turned into the more familiar desert features of palo verdes and creosotes as we dropped in elevation.

After some 10 miles of nice speed, we stopped to take a breather at a siderail, and took a few photos.   Just as we pushed away, I felt my Surly go mushy, and looked down to see the front wheel flat.  Man!  Musta happened just by rolling it over the gravel to the rail.

As we changed the tire, a pickup truck came by with an OVERSIZE LOAD banner on it, and just after that came a tractor-trailer with a HUGE construction vehicle loaded on the back of it.  It came by so fast that it moved a tremendous air column with it, thundering around us as we stood on the shoulder.  Geez!  Maybe the timing of the flat was a good thing.

Turns out the flat was caused by just a small thorn, and we were on the road in only fifteen minutes or so.  As we rolled, yet another OVERSIZE LOAD banner came by and Jesse decided to ditch off the shoulder and stop.  I looked around and saw it was a smaller load, one of those big round sections of pipe, and just let him go around me.

Then another ¼ mile up the road, yet another hugely loaded vehicle coming at us in the opposite direction.   I slowed down and snapped a couple of fuzzy pictures, then watched to see how the two drivers were going to negotiate passing each other, but they didn’t seem to have too much trouble.

Two miles further down the road, Jesse came plowing up from behind me and asked, “You decided to head up to Vail?”
“What? No. I’m looking for Sahuarita Road.”
“Well it was about 2 miles back there.  You missed it.”

We decided to backtrack the 2 miles – otherwise we’d end up retracing a segment of our Day 1 route.  We found Sahuarita Road and turned due west onto it.  I’m glad Jesse caught that because Sahuarita Road was a fun one to ride on – nice variety, easy traffic, and a long gradual downhill.   Nevertheless, we soon reached the 70-mile mark and this long stretch started to get tiresome for us both.

I’d hoped for a convenience store in Sahuarita (at Sahuarita Road and Nogales Highway), but the only one there was boarded up.  I knew there was another one 2 more miles east next to I-19, but we decided it wasn’t worth a 4 mile detour, and so instead we simply rested for a while there nibbling on the snacks we had with us.

North on Nogales Highway is good passage, albeit crowded with some traffic.  About 7 miles up I turned into a Circle K and scored what I’d been wanting, a bottle of iced coffee.  I was certainly waning and it perked me up nicely.

We turned west for 3 miles on Hughes Access Road, which turns north and into Alvernon Way for about 2 more miles .  Before leaving I had checked neither road for a shoulder, and now I wished I had.  There was not more than 3” right of the stripe, and both roads were packed with fast evening rush hour traffic in both directions.  You know, lots of impatient, slim-witted, pick-up drivers who think cyclists should never be on the road, and maybe they’ll teach us a lesson.  Well, clearly, we shouldn’t have been out there – those two roads are absolutely not for cyclists.  The only safe way to ride them is to fully take the lane, but to do so would have backed up traffic for miles.

We made our way through.  Both of us stopped to put on our red blinkies for added visibility.  We stayed plastered against the right, riding the stripe.  A few drivers got irrational and gunned their accelerators but most just carefully passed when they could.  But I do advise cyclists never to take these roads, especially not at rush hour.

North of Valencia, the bike lane returns, disappears again at the I-10 interchange, then returns again.  West on Ajo Way, then south on Palo Verde Road, finally back to the Holiday Inn where we started.  Whew!  Jesse kidded around that we might add a few more miles to get in our century – I’m glad he was just kidding.

We packed up our stuff, racked the bikes, and headed off into Tucson to locate an Olive Garden.  Jesse was craving spaghetti and meatballs.  I am quite certain this had something to do with the 90+ miles we’d ridden and the calculated 4,100 calories we’d burned doing it (which probably did not account for the pannier weight)

A tasty meal, a glass of wine, a cute server named Cheyenne.  Jesse and I discussed the liberal right, organized religion, the stock market, and other lofty pursuits, followed by doses of coffee and a speedy drive back to Mesa and Scottsdale.

Great trip!  Self-contained unsupported touring is really opening up a new dimension of cycling for both Jesse and me.

We worked pretty hard on day one and day four, due to the climbing and distance.  Additionally, we had to adopt a “let’s-keep-moving” mentality due to the limited daylight hours in December.

We couldn’t have asked for better weather – morning lows were never much below 40°F.  Most of the riding was done between 65 and 75°F.   Hazy skies the first day, blue skies the rest, no rains.  Headwinds every day – enough to whine about but nothing too terrible.

My knees and butt pained me this trip, almost certainly due to riding a bad seat position for too many miles on days one and two.   On the remaining days, I was trying to “heal,” but doing so while in the saddle isn’t easy.

We gave up some flexibility and adventure by staying in reserved motel rooms every night, but there was comfort knowing where we would stay each night.  Besides, staying at Motel 6 is sort of an adventure.

Finally, I suppose we already knew to avoid major cities on a bike tour, but I guess we figured south Tucson was not going to be an issue. Lesson learned. Next time we might stay in Tucson, but drive to Vail as a Start/Finish point.