We were both up very early and out of the park as promised. It was an easy choice to head back to Ebeneezer’s for breakfast. I again tried to recreate my beloved 2x2x2, this time with eggs, a slab of ham, and another humongous pancake. Good food here and great fuel for riding. Later, in the restroom, I took a lovely paper towel bath. Wasn’t so bad – I felt like I was starting to get the hang of this semi-hobo thing.

We headed south on Broadway, and had to climb a big hill up and out of Minot. We stopped for riding snacks, some sundries (Randy purchased a rag to clean his chain at a thrift store), and I had to find a discrete place to apply some Chamois cream.

South on US83. The winds this morning were pretty strong, about 15 mph out of the SSW. They felt pretty strong because they were directly into our faces. Randy and I decided to work a 2-man paceline and did so for the next 10 to 15 miles. It didn’t really work out too well, however. Each paceline cycle, Randy would lead the way for a while, and I would take note of his speed, usually around 13 or 14 mph. I would then take over and diligently keep the speed at the same level. But time and again I’d turn around to find Randy 1/3 mile behind me. I’m sure Randy has a different version of this, that I was speeding up or something. Maybe. Although the paceline helped in these conditions, I know that some riders just aren’t very compatible executing it.

About 10 miles north of the town of Max, I heard a distinct “pfffft” from my bike. It continued to roll fine, but I quickly braked anyway to check it out. A big staple in the rear tire, buried up to the hilt. I considered not pulling it out and rolling as long as possible, but knew from experience it was only a matter of minutes before I’d be flat. I pulled the staple and the rest of the air came out with it.

All alone to fix it, I was a little anxious. On my Trek bike, I ride thorn-resistant tubes and tires, and I hadn’t had to fix one in a long time. Likewise, I had a new, untested frame pump with me. I knew where the hole was and so I considered patching the tube, but quickly decided to use one of the two spare tubes I had with me, for simplicity’s sake.

There were some hitches. It took me some tries to even get the rear wheel off, after I eventually decided that all the panniers had to go. It then seemed best to invert the bike, due to the rack and fenders. I eventually got the new tube on and found my new frame pump worked marvelously. It has a low pressure setting that fills the tube quickly (very nice for my 37mm tires), and then a high pressure setting for topping it off.

After re-assembling wheel and re-loading the panniers, I found the tire stuck against the brakes and fenders, and eventually discovered that I hadn’t fully seated an area of the tire bead. Ugh. Off with the panniers, invert the bike again, off with the wheel, deflate. The whole process took about 15 to 20 minutes, partially due to the hitches, but also due to my gazing around at my surroundings. Grain-filled hills rose all around me, wind turbine towers were positioned out for miles, and the winds briskly flowed by. The grains waved, the turbines spun, the sun shone, and I just started feeling very lucky to be here.

Just as I was getting the tire re-inflated a pickup truck pulled off onto the shoulder and asked me if I needed a lift or some help. Man! Here I was on US83, a 70 mph freeway and this guy pulls over to help me. Friendly people up here!

I finally got back rolling, and felt a tiny surge of confidence in it all. In some ways, the flat tire was a rite of passage for me, as silly as that might sound. I guess it represented one of the common hazards of touring cycling and I had at least addressed it to satisfaction.

I wondered where Randy might be. The first day, we had agreed that it would be commonplace for us to get separated, and that our plan would be simply to meet in the next town. Whoever got there first was to park his bike conspicuously for the other to see. It felt like a long 10-mile grind to Max into the headwinds, and my speed ground down between 10 and 12 mph. Sure enough, once I hit Max, I saw Randy’s bike parked out by the shoulder near a Cenex station, and stopped for a much needed Gatorade and top-up on the water bottles. Fortunately, their food store had a bathroom too. 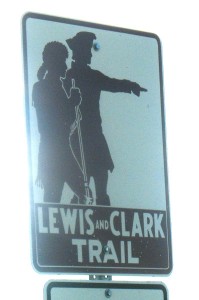 Refreshed, we headed again south down US83. Having covered 30 miles so far, it was already after noon. We found that the winds had slightly calmed down to around 10 mph, still from the south though. Continuing another 12 miles, we hit ND1804 just north of Audubon Lake. This road represented our return finally to the AC map’s Lewis & Clark Trail, this time outside the influence of the oil boom.

At the lake, we considered, with some longing, buying a “pre-arrival” beer at a small bar there, but instead decided to push further southward to Riverdale and look for a place there. 1804 took us south on a long bridge maybe 2 miles across the lake. Winds picked up over the water but the viewing was really pretty.

Somewhere around here, I had the realization that I had stayed on my middle chainring the entire day. The headwinds had never permitted me to pop up to the large one, and only rarely to even get off the handlebar drops. I oddly decided to make it a day-long policy.

Following the AC map, we turned west onto ND200. By mid-afternoon, the winds were streaming from the WSW, again into our tired faces. Another slow motion, 10 mile slog directly into it. We finally reached Riverdale, but we were disappointed not to see a grill or bar or any other sign of business, other than a gas station with an attached food store.

Winding around the peaceful and pretty town, we eventually found a non-descript place with a sign out front that read, “Knight’s Bar & Grill,” which seemed to be located in the same building as the Riverdale High School Auditorium. I mistakenly assumed it was some sort of private club (you know, Royal Order of Riverdale Knights or something), but we explored down its halls to find a great little bar and restaurant brimming with patrons. It turns out that Knight’s Bar and Grill is a part of the Riverdale High Lodge, located in the former high school building.

I started out with an Amberbock, but Randy then discovered they had Killians’ Red on tap. Nice! A couple of these later, and we were both contented campers. The menu promised sirloin steaks, baked potatoes, salad, and all the fixings, and I think I convinced a reluctant Randy to stay for dinner here. He was more interested in doing some campside cooking tonight I think, but after the tough ride today, a sirloin steak sounded too good for me to pass up.

The steak was delicious. Population in Riverdale is officially listed at 1273, and I swear that 20% of them were here at Knight’s tonight. We found out why. A very large wedding was being held in the auditorium, scheduled to start in an hour or so, and I figure lots of its guests were over here getting warmed up for it.

While we ate, rained pounded the bar windows, but only briefly. I struck up a conversation with one patron, and he asked about our cycling trip and route. He was very adamant in warning about the dangers of riding on ND1804 north of the lake due to the oil business, and I soon learned with some horror that a close relative of his (sister-in-law I think) had perished on a bicycle there recently.

After dinner, Randy and I wandered into a waiting area outside the auditorium, found a free wi-fi signal, and sat down to check email, etc. with Randy’s netbook. Soon, the bridal party itself wandered in taking care of last minute details. I found it a little awkward for the bridesmaids and the bride to be sharing a room with grimy us.

Outside, the bikes were wet but otherwise OK. Fortunately, I had remembered to put the cover on my Brooks saddle. We stopped at the gas station to top up our water bottles, and talked to the attendant there about winds, ND weather, and area fishing. We then slowly rode about 5 more miles west, still into the winds.

Our ride took us 2 miles across the top of Garrison Dam, known as the fifth largest earthen dam in the world. The views were pretty across the lake, but the winds were probably 30mph, screaming into our faces. I’d never ridden in such strong headwinds anywhere. What a grind.

We finally reached Lake Sakakawea State Park and Pick City. Pick City had a tiny motel, restaurant, and laundromat that looked inviting. Randy observed that Riverdale was probably where the dam engineers and managers lived, and Pick City was probably where all the workers lived. The State Park offered campsites and beautiful views of the huge lake. We opted for the campsite, even after learning that a simple camping site cost $17 (What? Do they bring you breakfast in the morning?).

We found a good site on the waterfront bounded by RVs, but sufficiently separated from them. After setting up our tents, we enjoyed a peaceful hour or so in the evening sunlight, lounging around the water.

Eventually, though, one of our neighboring RV parties, a family, began to overly consume some beer. In time, the drunk Dad was loudly telling stories and dropping frequent F-bombs, right in front of his 6- and 8- year old kids. Randy and I both wondered how these kids were ever going to grow up in this world. Fearing a long string of loud late night banter, Randy finally had a brief talk with them, and surprisingly, they toned it down for the remainder of the night. Well done Randy.