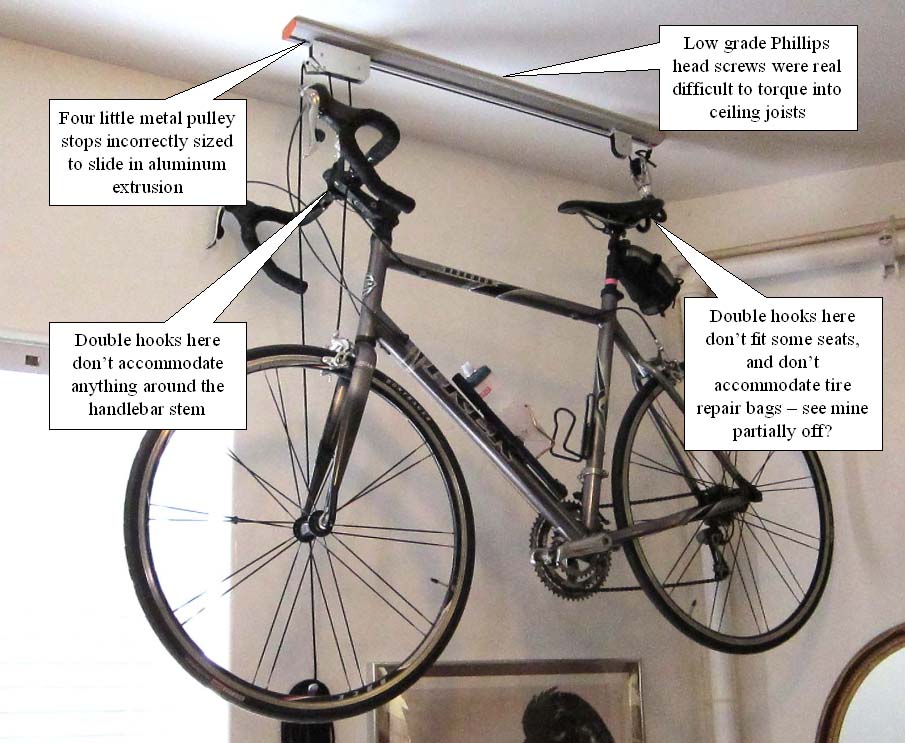 Dragging my trash cans around my touring bike was getting to be a pain, so, inspired by Jack’s garage, I bought this ceiling lift online.  It is a Racor Pro ABL Aluminum Ceiling Mounted Bike Lift.

This lift looks cool and gives you back some garage floor space.  However, it has some so-so product features and installation was not smooth.   I decided to give it a brief product review…

To remedy this last problem, as suggested by a post I read online, I installed two loops of light gauge picture frame wire loosely over the pulley wheel to keep the rope in place.  The wire rubs slightly on the wheel as it turns, but no big deal.

To remedy both of the above problems, I added a heavy gauge picture frame wire “hanger” off the back of the seat as shown.

I had planned to hang my Surly LHT on this, but couldn’t do it without removing the handlebar bag mount (and didn’t want to) or adding a wire hanger there (likewise I didn’t want to).  In the end, I put my Trek on it, with the modifications to the seat as shown.

Of course, as you can see from the photo, this thing works.  But it should be a slicker product.  This model is not sophisticated and will  generally require modifications.  I’ll give it 4 stars out of 10.

At least it looks kinda cool on my garage ceiling.

After more than 18 months of use, I will definitely upgrade the rating I gave to this product. Despite the installation snags and mods described above, this lift has performed flawlessly and  I’m glad I bought it.  The venetian blind locking mechanism is very dependable.  Rating is hereby promoted to 8 stars out of 10.